Whether it’s extremist hate groups or the anger of a neighbor, hatred can seem like an insurmountable wall. However, even in the midst of its emotional push and pull, we are not powerless. We can refuse to meet hate with hate. However threatening hatred may appear to be, we can yield to God’s love. God is Love, and Love is always operating, replacing anything unlike Love.

The omnipotence of Love’s dynamic presence and its inevitable influence and impact are best illustrated with the immediacy of light replacing shadow. God, Love, operates through law—a moral and spiritual force.  Christian Science refers to this moral and spiritual force as the law of God, good, the law of Life, Truth, and Love. This law of God governs and guides all the varied expressions of God.

So what does this have to do with standing up to hate? By yielding to the omnipotence of Love, we can understand that hate is powerless. Mary Baker Eddy explains this in Science and Health with Key to the Scriptures, referring to Truth as another synonym for God: “Because Truth is omnipotent in goodness, error, Truth’s opposite, has no might. Evil is but the counterpoise of nothingness” (pp. 367–368). Knowing this, even in a degree, reveals how fragile and fraudulent hatred is. And because Love is omnipotent, the law of Love is equally so, and is instant and active under any circumstance.

Here’s one small example. In a dispute over barking dogs between a couple and their neighbor, the neighbor became irate, threatening this couple. Choosing not to react, the couple prayed, turning the whole situation over to divine Love. They recognized that the law of Love was already in operation. This lifted a sense of being stuck and led to their wholehearted forgiveness of the man. Knowing that God’s law of Love is continuous, they expected that good would be the only outcome. And so it was. They wrote a note to the man, letting him know it was their wish to be good neighbors. The next day, they received a friendly note and flowers from him, which marked the end of the dispute and the beginning of a harmonious friendship.

By yielding to the omnipotence of Love, we can understand that hate is powerless.

Christian Science, the law of Love, “acts as an alterative, neutralizing error with Truth” (Science and Health, p. 162). As this was the case in the story above, so it is everywhere. We see this law in action in a well-known account in the New Testament in John, chapter 8, where a crowd of individuals bring to Jesus a woman who was caught in the act of adultery. The Mosaic law said she should be stoned to death, but the crowd also wanted to trap Jesus into disobeying the law. Jesus held to what divine Love was knowing. And it seems apparent that the woman must have felt for the first time what Jesus knew—that she was the loved of Love—a life-changing truth. Jesus expressed the law of Love both in forgiveness and in affirming her ability to reform to a new life. Prior to this remarkable transformation, Jesus turned to the crowd and said that if any among them was without sin, he could cast the first stone. The law of Love continued to operate, revealing the error in their consciences. And, one by one, all slowly turned away. The law of Love—like pure waters pouring into consciousness—freed the woman and neutralized the hatred of the crowd. No violence was done. The moral and spiritual force of the law of Love brought out once again that Life and Love are harmonious and continuous.

Hatred can mesmerize thought to commit extreme acts. But the key to healing this is to see that it all starts with thought, and thought is where hatred can be stopped. We can break through its mesmeric grip, and in the sanctuary of prayer, find the spiritual cause and its effect—Love and Her creation. Man, made in God’s image and likeness, responds to Love, naturally. And perfect Love, that is the love of God, when reflected in our highest actions, casts out the fear that fuels hatred.

Our expectation to see man’s higher spiritual nature opens the door for that higher nature to appear. Honesty, compassion, and affection are moral, universal qualities that speak to all hearts. The steps we take to express and share from an honest heart may seem modest against the seeming giant of hatred, but these qualities lead to spiritual power and understanding. A recent Christian Science Monitor report illustrates this in an article about a Middle Eastern miniseries put on during Ramadan by Arab TV as part of a larger effort of media outlets to challenge terrorism. The miniseries comes complete with a special ad that confronts a suicide bomber with messages of love and mercy like “Worship with your God with love, not terror. We will counter attacks of hatred with songs of love. Be tender with your faith, tender, not harsh.”

It takes moral courage to stand up to hatred. But the louder it clangs, the more we can listen for that still, small voice of God—that calm ever-present assurance of Love, which lifts human consciousness into healthy channels, where we are led to think, speak, and act in ways that help and heal.

Mary Baker Eddy writes: “When error strives to be heard above Truth, let the ‘still small voice’ produce God’s phenomena. Meet dispassionately the raging element of individual hate and counteract its most gigantic falsities” (The First Church of Christ, Scientist, and Miscellany, p. 249).

The appeal is to thinking persons everywhere. Hatred and division are not sustainable. Truth cannot be harmed, and Love never fails. As we see all humanity fully clothed in the complete armor of Love, human hatred’s reach is diminished. We can refuse to hate; we can yield our thoughts, prayers, and actions wholeheartedly to Love. Prayer by prayer, step by step, heart by heart, hatred will fall. 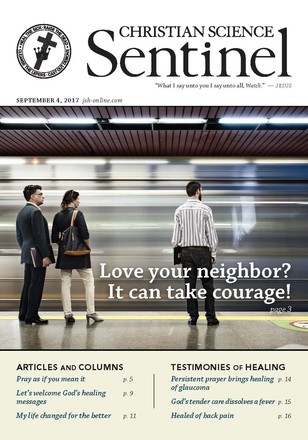 When I write, why do I need to be edited?

Love your neighbor? It can take courage!

Pray as if you mean it

My life changed for the better

A trip to remember

By Elisabeth Anetta Schwartz with contributions from Emily Schwartz | September 2017

Healed of back pain

Refuse to hate—yield to Love