WHEN I WAS 14, I LAPSED INTO A DEPRESSION that went on for a number of months. During that time, I often had thoughts of suicide. I'd been dealing with mood swings, anger, sleepless nights, and fights with my family. It seemed like there had been a growing gap between God and myself. But these difficult months felt even more severe. I was beginning to physically harm myself. I'd even cut myself on purpose a few times.

My parents were supportive throughout this time, talking to me, praying about my well-being, and even suggesting I talk to a Christian Science practitioner. But I also kept a lot of what I was feeling to myself. I wouldn't agree to seek help, even though my parents persisted in encouraging me, because I felt vulnerable. I would go in and out of stages, sometimes believing myself cured, sometimes actually enjoying depression. Against parent's rules, I would leave the house to go on walks late at night, hoping to get hurt.

It was around this time that I had a bad argument with a family member, and, through tears, the thought of suicide came so strongly that it shocked me. I began wondering how I'd allowed my thought to plummet so far. As someone who was raised in Christian Science, I always felt like I had a good understanding of it, but I realized I needed to take another, much deeper look.

I thought about the previous summer when I had attended a camp for Christian Scientists. While I was there, they'd told us about their spiritual themes—something the campers and counselors pray about and strive to practice. One of the themes was, "For God hath not given us the spirit of fear; but of power, and of love, and of a sound mind" (II Tim. 1:7). As I thought about it, I began to say this verse to myself. I personalized the message and directed it toward myself, acknowledging the qualities I knew I expressed as God's reflection. God did not give me a fearful spirit or a distraught mind. He filled my heart with love and truth. And as His reflection, I reflected the one perfect, sound Mind. And other negative mental suggestions were lies and couldn't tell me who I truly was.

I also searched on the internet and read some things about depression that sounded awfully familiar. It was then I decided I was going to have a healing. This wasn't my true self.

Still thinking back to that summer, I remembered one of my favorite quotes from Science and Health and looked it up. It says: "Trials teach mortals not to lean on a material staff—a broken reed, which pierces the heart. ... Trials are proofs of God's care" (p. 66).

I used to think that meant God put trials in front of us to help us learn. But it really hit me then. Trials are proofs of God's care because God helps us through each trial. Trials prove you can't fix things materially. I knew God was watching and governing me. He was the conscious thought that had kept me from hurting myself. God had protected me on my late walks. His hands were stretching forward and comforting me constantly.

It's not that God is causing the trial, but He is there to guide and guard you out of danger and fear, watching over and comforting you, while gently nudging you in the proper direction. This sudden revelation—that I really could never be separated from God, and that even if I didn't want God's help, He would never leave me—brought my thought out of the darkness and back into the light.

It was after this that I knew I wanted to try again, to enjoy life. More than anything else, I wanted to give it another shot because I knew that with God beside me, I could never go wrong.

I knew God was watching and governing me. He was the conscious thought that had kept me from hurting myself. God had protected me on my late walks. His hands were stretching forward and comforting me constantly.

The depression vanished almost instantly. Since that day, I have never had thoughts of suicide again. I began to actively watch for the good all around me. I've been able to reconnect with my family and mend our relationships, and was able to pursue the dreams I never realized I had. For instance, I got a scholarship to camp and began working with horses. This was so much more than just recovery. I saw my family in a completely different light. We understand each other now. They didn't so much change, as I saw all the good in each of them.

It seems like when we're depressed, we feel as if no one loves us. That's how I felt. But I learned that God is all the love you ever need; He is Love itself. You can see those words in Sunday School, usually hung up on the wall, and never think anything of them. God is Love. I like to switch them around to say, Love is God.

I used to wonder how God could be all-knowing and yet not know when bad things were happening. It made me think, when I was depressed, that God saw what happened and just didn't care to help. But if Love is God, does Love understand hate? Does Truth know lies? Does Life know death?

The most important thing I learned was that my life didn't suddenly "get better." The truth was, it already had been filled with good. I just didn't see it. God nudged me and woke me up to His goodness because He loves us so much.

In order to preserve confidentiality, the author's name has been withheld. 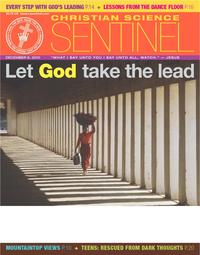