Find your music and play it!

A long time ago, in the first or second grade, the music teacher came in and gave us all a test.

She played a note on the piano, and then another note. "Is the second note higher or lower than the first one?" she asked. What an easy test, I thought. A few more notes and a few more questions, and we were done.

Years later, a friend recalled taking the same sort of test. "It was awful," she said. "I couldn't tell one note from another. I didn't have a clue."

Soon her parents received a note announcing the verdict: Their daughter wasn't musically inclined. They might as well not waste their money on music lessons.

I could sense the puzzlement and devastation she still felt. I almost felt guilty for passing that test and enjoying music so much in the years since.

Mom says that at age two, I insisted on hearing the Broadway musical Paint Your Wagon over and over until the album wore out. Since then, I've listened to lots more music, taken lessons, sung in a chamber group, written music reviews, written songs, played in bands, recorded songs, played jazz with my kids. Even when I'm not doing music, which is most of the time, there's a song, or a snatch of melody, or the last ad jingle I heard, playing like Muzak in my head.

At one point, though, it seemed impossible to squeeze any music into a schedule jammed with work, family, church, and community. I wondered if I was being called to give up music, as Abraham, for the moment, felt he had to sacrifice his son Isaac, his beloved son. I stewed about it and decided if that's what He wanted, I would do it. But right then, in that moment of acquiescence, something told me that the very joy, freedom, and release I felt in making music was my answer—God wouldn't put that spirit in me if He didn't want it expressed.

In the classic blues song "Boogie Chillen," the late John Lee Hooker said it this way: "One night I was layin' down, I heard Mama and Papa talkin'. I heard Mama tell Papa, 'You let that boy boogiewoogie! It's in him, and it's got to come out.'"

That's how the arts are. There's a joy of expression that's in you, and it's got to come out—in music, painting, sculpture, dance, poetry, or some other form.

But what about the people who flunked that grade-school music test? Who can't draw, can't dance, never write poetry? Has God, for some reason, deprived them of that joy?

No, this isn't a matter of deprivation—it's a matter of definition. Define art as certain types of expression involving paint, words, musical notes, and so on, and it seems some people have it and some don't. But if you define art as what's happening inside someone during artistic expression—the pure joy and freedom of expressing those qualities God created you to express—then artistic expression comes in countless forms, and truly belongs to everyone.

It comes in more forms than there are people: the tender empathy of mothering, the sweet cadence of a golf swing, the pure order of accounting, the nurturing care of gardening, the hands-on logic of auto repair, the creative responsiveness of sales, and so on, to infinity. In those moments when you are manifesting the divine qualities in any form, you are expressing art.

This understanding of the innate artistry of being is expressed in many ways in Christian Science. In Science and Health with Key to the Scriptures, Mary Baker Eddy wrote that "infinite Mind creates and governs all, from the mental molecule to infinity. This divine Principle of all expresses Science and art throughout His creation, and the immortality of man and the universe" (p. 507).

Understanding that the source of all art is God and that all being expresses art, dissolves the sense of art as a gift that some people don't have. The only valid art test ever given was described in the first chapter of Genesis—"And God saw every thing he had made, and, behold, it was very good" (verse 31). And we all passed.

He made you, and you are the expression of His art. It's in you, and it's got to come out. 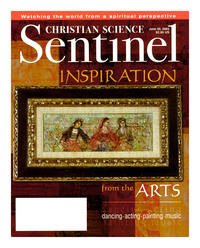