Glory, honor and peace for everyone who does good.

On November 11—a holiday in the United States, Britain, Canada, and other countries set aside to honor those who have served in the armed forces—it seems appropriate to ask, What comes to mind when you think of a veteran? A soldier receiving a medal? A white-haired guy wearing a baseball cap with the name of a navy ship on it? Or some young man or woman in uniform, waiting for a connecting flight at the airport on the way home from deployment overseas? Or maybe someone in a wheelchair who is disabled, or even someone who is homeless or unemployed? These views do indeed describe some folks who have served in the military, but there’s an entirely different way of thinking about veterans. Christian Science shows us how.

What truly makes a veteran has to do with the expression of qualities—attributes of God, such as self-sacrifice, courage, discipline, honor, integrity, thoughtfulness, brotherly love, and teamwork. This list could go on and on, but these qualities of Spirit, God, really speak for themselves when it comes to why we respect those who have served, or are serving, in uniform. So many of us have a friend, relative, or acquaintance who fits this description. Taking a moment to pause and be grateful for those who have expressed these spiritual qualities says something important—not only about them, but about us, as well as about the culture that lifts up and values these qualities.

Why? Because these God-derived qualities, expressed consistently, especially when it seems difficult, are the death knell to every form of evil, from the oppression and domination of governments and people, to the most vile forms of disease and plagues. Consider this: It was through his love and understanding of God’s law and love for his people, the children of Israel, which enabled the young David to express the courage and resourcefulness necessary to overcome the great evil, the enemy Goliath represented. That terrorizing foe defied the law of God and sought to dominate and enslave the children of Israel (see I Samuel 17 in the Bible for the whole story).

What truly makes a veteran has to do with the expression of qualities—attributes of God.

Many generations later, it was the expression of spiritual insight, discipline, brotherly love—and above all, absolute faith in the power of God to heal—which prompted a centurion to come to Jesus for help. He was a veteran Roman officer and soldier well-versed in giving orders, but he came humbly to Jesus, seeking the healing power of the Christ, Truth, for his servant, who was so ill he couldn’t leave his bed. The result? The evil called disease was destroyed, and the servant was healed immediately (see Matthew 8:5–13).

As we recognize and acknowledge these spiritual qualities in our veterans, those who have expressed them often under the most trying circumstances, we grow in our own expression of them. But as important as it is to take the time to honor our veterans who have served in the military, how about taking a moment to honor the veterans from other walks of life who have also had a substantial impact on our lives? In my case, I’m thinking of a veteran Christian Science practitioner who came to my rescue in one of my darkest hours.

In the early years of my public practice of Christian Science, a case in which I had given everything I knew to give appeared to end in disaster. I felt I should quit. I thought I wasn’t cut out for this line of work after all. But the very next day, I bumped into this practitioner whom I deeply respected, and who had mentored me on and off for several years. This veteran took one look at me and instantly knew I was in dire straits! She immediately cancelled everything she had on her schedule, put her arm around me and took me to her office. For the next two hours she shared several experiences that not only brought comfort, but also moved my thought back into a place where I was soon able to see the light again. I’ll never forget her spiritual insight, her ability to cut through the sorrow and self-condemnation, and the depth of her expression of Christly love in which I felt bathed and purified.

So when I think of veterans these days, it’s not only our military veterans I think of, but also veterans from all walks of life who have given so much to so many through their demonstration of good, their love of God and their fellow man. In the Christian Science textbook, Science and Health with Key to the Scriptures, Mary Baker Eddy writes: “One infinite God, good, unifies men and nations; constitutes the brotherhood of man; ends wars; fulfils the Scripture, ‘Love thy neighbor as thyself;’ annihilates pagan and Christian idolatry,—whatever is wrong in social, civil, criminal, political, and religious codes; equalizes the sexes; annuls the curse on man, and leaves nothing that can sin, suffer, be punished or destroyed” (p. 340).

So when we pause to remember our veterans this week, how deeply grateful we can be that these God-qualities, spiritual attributes, that have characterized the lives of our veterans, have indeed contributed not only to the end of wars, but to the end of evil itself!

Sandy Sandberg is a Christian Science practitioner and teacher living in Norwell, Massachusetts. 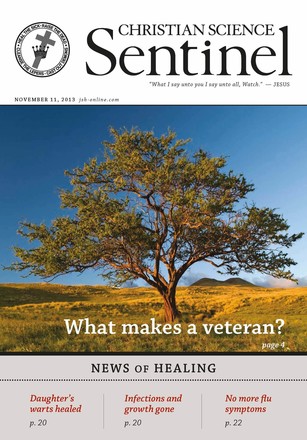 What makes a veteran?

The relationship God gives us

You are not alone

A new way to read The Christian Science Monitor Weekly

Looking for the spiritual intent

Inspired and healed after a fall

Fresh ways of sharing the Truth