One sunny afternoon last year, in the middle of the South African summer, I needed to drive into an unfamiliar industrial part of our city, Cape Town, and found myself uncertain of how to find the factory I was looking for. My phone, which had the directions and map on it, was on the seat next to me. Having stopped at a red traffic light, I decided to have a quick look at the directions. The next thing I knew, I felt a slight bump and realized my car had drifted back into the car behind me, as I hadn’t put the brake on properly.

The driver of the car came up to my window. He was really angry. Before I could say anything, he began swearing at me in very strong language with a particular racial bias. Soon it became apparent that he saw me as the enemy and that I might be in some danger. He was going to make me pay for this, and not just with money. To him, I must have represented a people who have caused much of the injustice experienced by people of color in South Africa, particularly in regard to ownership of land, which many considered to have been “stolen by the white people.” Several years ago, there was a lot of tension during a period of protest against the more obvious remnants of the colonial era. This included the Rhodes Must Fall movement protesting institutional racism in education, which led to the removal of a statue (Cecil Rhodes) symbolizing this period of South Africa’s past.

In the face of this fast-deteriorating situation with the driver, I uttered a silent, mental protest against the notion that God’s children could be at odds with one another, a protest based on the understanding that we all have one Father-Mother, God, and are His innocent, loving children. Despite what was going on around me, I knew that my, and his, divine Parent was present and in control, and that He would guide us both safely through this turbulence.

Over some years I have become familiar with the teachings and practice of Jesus as found in the Gospels. This is owing to my consistent, daily study of the Christian Science pastor—the Bible, together with Science and Health with Key to the Scriptures by Mary Baker Eddy, the Founder of the Church of Christ, Scientist. Science and Health has helped unlock for me the spiritual meaning of the Scriptures.

The Gospels recount several instances when Jesus faced conflicts of different kinds, and his responses are instructive. Faced with a questioning crowd of people who wished to stone a woman who had committed adultery, he quietly wrote on the ground before responding with a profoundly wise reply that immediately extinguished the conflict (see John 8:1–11). Before raising Jairus’s daughter from the dead, he put out the wailing mourners from her quarters (see Luke 8:41, 42, 49–56). When faced with crowds of people wishing to make him their king, Christ Jesus left behind the multitudes he had just miraculously fed, and sought the solitude of a mountain for his own spiritual nourishment and guidance (see John 6:5–15). And, in the last days of his mission, faced with the accusations of the Jews and a cross-examination before Pilate, Jesus chose to remain silent (see Matthew 27:11–14).

In every instance, Jesus turned away from the demanding noise of the scene around him in order to pray. He taught: “When you pray, enter your closet, and when you have shut your door, pray to your Father who is in secret. And your Father who sees in secret will reward you openly” (Matthew 6:6, Modern English Version).

I uttered a silent, mental protest against the notion that God’s children could be at odds with one another.

Science and Health expands on this subject in its first chapter, entitled “Prayer”: “The closet typifies the sanctuary of Spirit, the door of which shuts out sinful sense but lets in Truth, Life, and Love. Closed to error, it is open to Truth, and vice versa.… To enter into the heart of prayer, the door of the erring senses must be closed. Lips must be mute and materialism silent, that man may have audience with Spirit, the divine Principle, Love, which destroys all error” (p. 15).

In my case, I had to shut out both the fearful thoughts regarding my immediate safety and the urge to respond to the insults and unjust accusations the other driver was leveling at me. This was made easier when I saw them for what they were: thoughts that were not from an all-loving God and that would separate me from my brother and from feeling God’s care.

As I lifted my thought to God and listened to the divine Mind, I began to glimpse spiritual reality. A feeling of peace filtered in. From out of this calm, I found a strong feeling of brotherly love toward this man. While I could hear the tirade—and even understood it—I didn’t feel part of this threatening scene anymore, and I just wanted to give the man a warm embrace.

He showed me his car, the dent in the number plate, and the broken indicator light with its shattered glass. I acknowledged my responsibility for the damage, saying little more, and continued feeling only love for him. He wanted my contact details, which I gave to him and which he then cross-checked and discovered to be correct. And then his tone changed. He said that he knew someone who could take out the dent very cheaply, that he would send me the invoice by WhatsApp, and that I could refund him. I told him that I was very sorry to have bumped his car and that I would be happy to refund him. He then apologized for all the things he had said to me. We parted amicably and peacefully, and I silently thanked God for guiding and guarding my thoughts and for showing me His love for all His children.

A few days later I got an invoice for a very reasonable amount, which I duly paid. And then I got another WhatsApp from him with another apology for his hard words. My heart went out to him, and I gave all glory to God in my gratitude. Jesus instructed his disciples in his Sermon on the Mount, “Love your enemies, bless them that curse you, do good to them that hate you, and pray for them which despitefully use you, and persecute you” (Matthew 5:44). Turning to prayer in this time of need had indeed proven to me the power of these commands, and that divine Love destroys anger and hate. 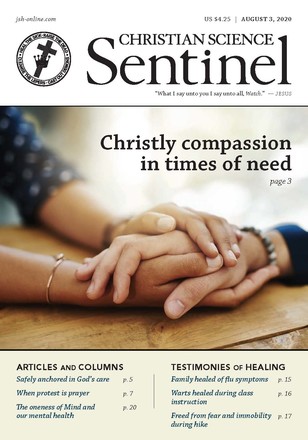 Writing for all of humanity

Christly compassion in times of need

When protest is prayer

Grace that sweeps away mental darkness

How I prayed when quarantine hit

Freed from fear and immobility during hike

The oneness of Mind and our mental health