How do we bridge the political divide?

The April 26 online Monitor’s View titled “Take fearmongering out of US politics” (CSMonitor.com) proposes that removing alarmist rhetoric from election campaigns is a key step in fostering constructive, collaborative discourse between parties. It also offers a simple “North Star” that anyone, anywhere on the political spectrum, can follow: Let civility be your guide.

Civility, both in thought and speech, may seem like a given when it comes to reaching across party lines. But how do we activate this quality when “negative partisanship” seems so all-pervasive—not just in political ads, but also on social media?

My study of Christian Science has taught me that spiritual qualities such as compassion and genuine love are necessary to promote civility—and that they come into expression through an understanding of the nature of God. The Bible states that “God is love” (I John 4:8). And in Science and Health with Key to the Scriptures, Mary Baker Eddy defined our relationship to Love when she wrote, “Love, the divine Principle, is the Father and Mother of the universe, including man” (p. 256). It follows, then, that as children of Love, our own nature must be loving and benevolent, and not prone to destructive or hostile behavior. Perceiving the presence of God’s universe, where nothing exists but Love and its manifestation—infinitely diverse, but universally characterized and supported by Love—requires a commitment on our part to rise above the fray, political or otherwise, and to look deeply into Love’s pure reality.

I saw the healing effects of doing so when I was thrust into a work project with someone whose views seemed irreconcilable with mine. I was praying, though. And one day it occurred to me that Love, being One, didn’t have two sides. It knew only its own infinite individuality—harmony expressed as unity.

In prayer, I turned away from conflicting agendas and personalities and affirmed that Love’s harmonious being, which we all express, was the only reality. I found myself turning to God to understand what Love was expressing in its ideas, and how Love was governing.

As a result, I began to understand my co-worker’s communications in a new light. I started to hear what he was really saying as I saw both of us as included in, and expressing, that Principle of harmonious being. The project came together quickly after that. In the end, we found more than common ground; we found an inspired solution that blessed everyone.

Civility in political discourse—or across any kind of perceived divide—is a necessary and helpful first step in changing the tone of the conversation. But we have the assurance that something even greater awaits us. As we understand more clearly that nothing within Love could ever be antagonistic, we’ll witness the dawn of true unity and the progress that naturally results. 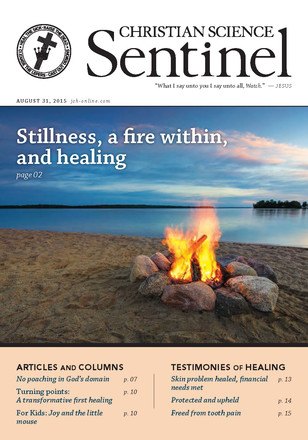 Stillness, a fire within, and healing

No poaching in God’s domain

Joy and the little mouse

Take fearmongering out of US politics

By The Monitor’s Editorial Board | August 2015

All the healing thoughts you need