Whether your concern is about the divisiveness in the United States Congress, the challenges in the Eurozone, the continuing conflict in Syria, or North Korea’s more aggressive stance, few would argue against the thought that more evidence of peace and love would be very welcome.

And it’s not impossible. Right now, each of us has the power to change these distressing conditions for what the writer of Galatians in the Bible described as “the fruit of the Spirit.” He included love, joy, peace, longsuffering, gentleness, goodness, faith, meekness, temperance, among those fruits. And he added—shifting the balance on the side of good even further: “against such there is no law” (5:22, 23).

Hatred, whatever form it may take, has never been and never will be a part of God's plan for humanity.

That point—that there is no law against good—implies that there is a law against evil, that hate, lust, confusion, and their like are in fact illegal actors on the human scene. Understanding God’s goodness reveals their claim to power as nothing more than shadow play. Divine Love’s allness excludes hate, Truth’s reality outshines lies, Life’s infinity eliminates deadly influences. As Mary Baker Eddy writes in Science and Health with Key to the Scriptures: “Truth, Life, and Love are the only legitimate and eternal demands on man, and they are spiritual lawgivers, enforcing obedience through divine statutes” (p. 184).

This law is humanity’s advocate in the face of hatred, confusion, and fear. Instead of accepting evil, it’s essential to insist that human conditions must conform to the spiritual facts. One way is to take time each day to pray for and about the fruits of the Spirit in relation to one’s own life and also the broader human scene. Such prayer can eliminate the illusions of hate, frustration, anger, intransigence which seem so intractable.

Hatred, whatever form it may take, has never been and never will be a part of God’s plan for humanity. Nor is hatred part of anyone’s true nature as the spiritual offspring of divinity. The God whom John defines as Love (see I John 4:8) inspired Jesus to teach his disciples to heal, not to destroy; to bless, not to harm.

It’s right to insist that confusion has no place at the negotiating table because God, the one Mind, is present to reveal solutions that will bless all. It’s right to challenge the belief of many minds, many agendas, many influences, and to recognize that divine Love always unites, never divides.

It’s right to insist that the spiritual lawgivers of Life, Truth, and Love can and will prevail. And it’s right to expect to see the fruits of the Spirit evidenced not alone on the world scene, but also as healing in our own and others’ lives. 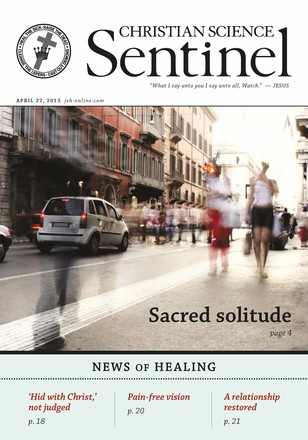 Love's transparency and the diamond ring

The journey of transformation

Sustained in a new country

'Hid with Christ,' not judged

Stop the hate; start the love