Peel off those labels

During college, I interned with an art teacher for a semester. On our first day we went over the class list, and she pointed to a student’s name and said, “You’re going to have trouble with him.” And it did appear to be true, as this boy—whom I’ll call “John”—sat at the back of the class with no interest or willingness to participate.

One day, to introduce a topic of study, I showed the class examples of jewelry I had made, mainly from found objects. I also showed them a particularly nice silver pin, explaining that with some thought and a bit of work, they could turn an ordinary-looking piece of metal into art.

During my presentation, the principal’s voice suddenly came on the intercom and announced that all eighth-graders were to be dismissed from class for an assembly in the auditorium. The students quickly left, leaving my samples all over the tables—except for the silver pin. In the confusion, I had not seen anyone take the pin, but my immediate thought was that John must have taken it.

However, this thought wasn’t in accord with what I had learned in Christian Science Sunday School about how to see people. Christian Science presents man as the spiritual, complete, pure expression of the divine Mind. Since Mind is infinite, ever-present good and includes no element of evil, Mind’s expression, man, can include no evil either. This spiritual perspective helps us see through the negative labels so often placed on people.

All day long, whenever the thought came that John had taken the pin, I continued to see him as innocent, in spite of his reputation. I told no one and instead considered how I could tell the class that my silver pin was missing without accusing anyone.

The next morning, as the class filed in, I was still thinking through what to say. John came up to me, his head down, and said, “I have a confession to make.” He dug down into his jeans pocket and handed me the pin. I thanked him, and we never spoke of it again.

I realized later that what had helped us both was an idea from Science and Health with Key to the Scriptures by Mary Baker Eddy: “Jesus beheld in Science the perfect man, who appeared to him where sinning mortal man appears to mortals” (pp. 476–477). For that moment at least, this Christly view released the boy from his label and gave him a different sense of himself.

There is another aspect of labeling that I have noticed. Sometimes in a family or other group, one child might be referred to as “the artistic one,” another child “the smart one,” another “the athletic one,” and so forth. While these labels are meant to be compliments and are happily taken as such, they can also be a subtle form of pigeonholing. Why can’t someone be both artistic and smart, free to enjoy new adventures and a wide variety of abilities?

Science and Health states, “The admission to one’s self that man is God’s own likeness sets man free to master the infinite idea” (p. 90). We can discover with joy that this applies to all of us equally. We might hear ourselves say, “I can’t draw a straight line” or “I’m no good at math” or “That’s just the way I am.” But that’s not the way we are! We have never been narrow, stereotyped personalities with restricted capacities.

The Ten Commandments recognize only one I am. Mrs. Eddy explains in Science and Health, “There is but one I, or Us, but one divine Principle, or Mind, governing all existence; …” (p. 588). And she says of man, “He is the compound idea of God, including all right ideas; the generic term for all that reflects God’s image and likeness; …” (p. 475).

Pondering these statements has challenged me to begin to face up to my own perceived limitations and realize that I can leave them behind. It is time to peel off all those labels from ourselves and others and to discover what we have always been—the spiritual and complete, unique, flawless expressions of ever-present, infinite Mind. 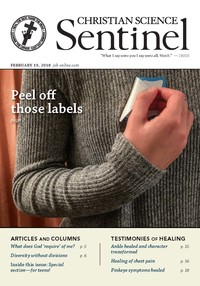