Yes, you have authority! How do I know that? I know it because the authority I’m talking about belongs to everyone. It’s not an authority that has anything to do with human rank and position—or how long a difficult situation may have been claiming to have authority over you. It is the authority to be governed by good alone. And every person has it. This authority cannot be usurped by any person, bureaucracy, or circumstance. It’s not an authority one person has over other persons, but an authority one has over every form of evil. This authority is wholly benevolent, and when exercised by you it has the power to remove evil from your experience and help others remove it from their experience—including the power to transform character, cure diseases, and raise the dead.

God’s authority consists of the fact that He, infinite Spirit, fills all space, leaving no place for anything unlike Him to exist. Spirit is the only actual presence, power, substance, and law—and the only creator. Therefore man—every woman, man, and child in his or her real identity and individuality—is spiritual, created in Spirit’s likeness. So, you have the authority to know who you are, God’s likeness; to be who you are; and to think and act in harmony with this truth without interference.

Christ Jesus illustrated this God-given authority in his life, teachings, and works so that all would learn of it and exercise it—that is, live it actively in their own lives.

When Jesus healed a man “which had a spirit of an unclean devil,” saying, “Hold thy peace, and come out of him,” the people “were all amazed, and spake among themselves, saying, What a word is this! for with authority and power he commandeth the unclean spirits, and they come out” (see Luke 4:33–36). Another time, the scribes and elders of the people wanted to know by what authority he did these things, and who gave it to him (see Matthew 21:23).

There is really only one authority, God. And it can be understood and demonstrated by everyone!

A centurion, a soldier with 100 men under his command, recognized Jesus as under an authority that could not be overruled. When his servant was sick at his house, he knew Jesus could heal his servant without even coming to the house because Jesus was under a higher command. He sent his friends to Jesus with a message: “I also am a man set under authority, having under me soldiers, and I say unto one, Go, and he goeth; and to another, Come, and he cometh; and to my servant, Do this, and he doeth it.… And they that were sent, returning to the house, found the servant whole that had been sick” (see Luke 7:2–10). Jesus was not actually exercising authority over either the centurion or his servant, but over the sickness that claimed to exist and to have authority over the servant.

This was the authority Jesus gave, or imparted, to his disciples (see Luke 9:1). It was the only authority there is to give—the authority of Almighty God. Jesus also gave it to all who would follow him now and forever. You see, he did not have an exclusive right to this authority. He was exercising the right he had, and we all have, to be exclusively governed by God—by Spirit, not matter. This is the teaching of Christian Science.

I saw my grandmother, who was a Christian Science practitioner, exercise this authority so vividly that it led me to explore the teachings of Christian Science without delay. She had experienced a bad fall and could not take care of herself. She was taken to a hospital because there was no Christian Science nursing facility anywhere nearby. A doctor examined her and said she had broken her back. She stayed in the hospital for bed care, but refused all medical treatment.

When I went to visit her, I was astonished to find her full of joy. She explained that the doctor was reading a copy of a Christian Science lecture. She was also amused that the nurses were all a flutter over the fact that a woman of her age (over 80) could have such an upbeat attitude under the circumstances. The very next day I went to a Christian Science Reading Room to find out why she was so filled with joy and confidence. I bought Science and Health, and I began to have healings as soon as I delved into it.

My grandmother was back home in two weeks, and two weeks later she was taking the streetcar downtown to her practitioner’s office—perfectly and permanently healed of a condition the doctor said he had seen men half her age never recover from. Her healing was possible because she knew who she was, God’s child, under His supreme authority. She exercised that authority over the claims of age and accident, which spring from the mistaken belief that we live as servants of matter instead of Spirit. With joy she submitted to the only authority there actually is, divine Life, Truth, and Love; and she triumphed. Her exercise of her and our God-given authority is why I am a Christian Scientist today.

Through the study and practice of Christian Science I have loved living under God’s authority, learning every day more about who I truly am as God’s child, how to think and act accordingly, and to experience the wonderful character-transforming, healing and saving works that it can and does accomplish for others, as well as myself. But most of all, I rejoice that you have this authority as well. It is here for you to understand and to exercise. Go for it! 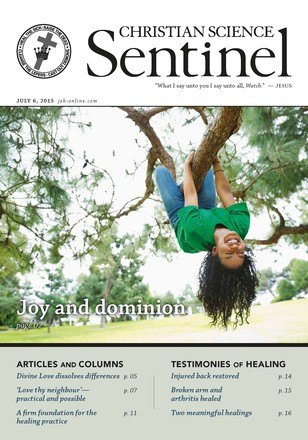 ‘Love thy neighbour’—practical and possible

And as a mirror shows us

A firm foundation for the healing practice

The authority you have—and what it can do