There is a great need today to pray about the status of women in the world. News stories vividly illustrate this need: negative predictions about women’s health; discrimination in the workplace; women and girls being abused, kidnapped, and killed around the globe.

A critically important way we can pray about this is to mentally embrace the idea of true womanhood. This true sense is given in the first chapter of Genesis, which says, “God created man in his own image, in the image of God created he him; male and female created he them” (1:27).

God, being infinite Spirit, has created male and female in the likeness of Spirit, not matter. This spiritual account of creation refers to male and female not in terms of physical gender, but as the individual spiritual reflection of the complete nature of God. Both female and male derive directly from God.

The next verse says: “And God blessed them, and God said unto them, Be fruitful, and multiply, and replenish the earth, and subdue it: and have dominion over the fish of the sea, and over the fowl of the air, and over every living thing that moveth upon the earth.” This passage indicates that both female and male expressions of God’s nature have equal standing: Both are blessed and fruitful and have dominion. Male does not rule over female, nor female over male.

It is only in the second account of creation, beginning in the second chapter of Genesis, that a material concept of man and woman is introduced and female-specific woes and male domination appear. But Mary Baker Eddy writes in Science and Health with Key to the Scriptures, “The Science of the first record proves the falsity of the second” (p. 522).

Both female and male expressions of God’s nature have equal standing.

This allegorical account replaces God as Spirit with the “Lord God,” a material sense of Deity, who creates man from dust, or through sensuality, and calls that false sense of man Adam. And then a false sense of woman, named Eve, is created from this material man. After the Lord God discovers that Adam and Eve have eaten forbidden fruit from the tree of the knowledge of good and evil, the Lord God curses them both.

The curse on Eve is in two parts. First the Lord God says, “I will greatly multiply thy sorrow and thy conception; in sorrow thou shalt bring forth children.” The second part is, “and thy desire shall be to thy husband, and he shall rule over thee” (Genesis 3:16).

Belief in the reality of this curse on Eve has caused untold hardship on women throughout human history. It supports a false sense that women must suffer from menstrual difficulties, through pregnancy and childbirth, and as a result of menopause, and that children are a burden rather than a joy. It supports the oppression of women, the view that no woman is fit to be a leader or an equal partner in politics, in business, or at home.

Christian Science reveals the falsity of this curse. It comes not from God, Spirit, infinite Light and Love, but is self-imposed through acceptance of the serpentine lie that evil has reality; that Love’s offspring could be at odds with one another; that life is in matter, not Spirit; and that shame and sin are a part of God’s spiritual children.

The Genesis 2 allegory illustrates that human trouble begins when we are deceived about the true origin of man and woman. Wouldn’t it then stand to reason that the way out of this trouble, and the way to overcome the oppression of women, is to awaken to the spiritual sense of creation—to recognize the pure nature of woman, of man, and of God, as given in Genesis 1?

Christ Jesus’ ministry was based on an understanding of the spiritual origin of man and woman. He accepted women as worthy, as spiritually minded, and as blessed, not cursed. He showed love and respect for women: for his mother; for the woman who was caught in adultery (see John 8:1–11); for the woman bowed over in illness (see Luke 13:11–17); and for the woman at the well in Samaria (see John 4:1–42). He had compassion on them. He preached the gospel to them. He healed them.

Male and female represent qualities of thought, which each one of us expresses spiritually and uniquely.

The life of Mary Baker Eddy is an inspiring example of the demonstration of true womanhood. The claims of the Eve curse loomed large in her life. She became gravely ill during childbirth, and later, she and her beloved son were parted, not to be reunited for decades, and even then not in the harmonious way she had hoped. Mrs. Eddy also faced almost constant criticism and ridicule from the public, the press, and even some of her own students because of her “audacity” as a woman to preach from the pulpit, to speak with authority about God and the ministry of Christ Jesus, and to heal the way the disciples did.

Yet, she persevered. She wrote in Science and Health: “The ideal man corresponds to creation, to intelligence, and to Truth. The ideal woman corresponds to Life and to Love. In divine Science, we have not as much authority for considering God masculine, as we have for considering Him feminine, for Love imparts the clearest idea of Deity” (p. 517). There is nothing about physicality in these statements. Male and female represent qualities of thought, which each one of us expresses spiritually and uniquely.

This clear understanding of true being enabled Mrs. Eddy to be healed of chronic ill health and maternal heartbreak, to rise above prejudice and discrimination, and to emerge as Discoverer of Christian Science and Founder of the Christian Science movement. In a stunning declaration, based on her demonstration of true womanhood, she once said, “As Mary Baker Eddy, I am the weakest of mortals, but as the Discoverer and Founder of Christian Science, I am the bone and sinew of the world” (Robert Peel, Mary Baker Eddy: The Years of Authority, p. 326).

The focus of Mrs. Eddy’s lifework was on liberating not just women but all of humanity from a limited, material sense of God and man. She worked tirelessly to elevate thought so that all could have a clear understanding of our place in God’s kingdom and of the equal standing of male and female—based on spiritual individuality rather than human gender. This is the understanding through which belief in the Eve curse—and the injustices springing from it—is destroyed.

One day, a woman called me in my capacity as a Christian Science practitioner to pray with her about sudden blurred vision. She’d had to leave work that day because she just wasn’t able to do her job. As we talked, divine Mind revealed to me that we needed to prayerfully address the belief in the mythical Eve curse. So we prayed about this false sense of womanhood, realizing that no one, man or woman, is tied to any curse. Because our true being is spiritual and created by God, we all have freedom and divine authority to express intelligence and grace, and to do so without interference.

This woman was back at work within two days, free from that physical claim. She later said that just prior to this physical problem, she had been praying deeply about her marriage, which seemed to be under great stress; and that being reminded of the curse on Eve was a sharp wake-up call, a life-changing experience in her spiritual growth. She shared that as we discussed this—which appeared to have nothing to do with the problem that had prompted her call—a sense of freedom from the belief of that curse broke over her like a bright ray of hope. She also saw it was hope for her husband, because the curse on Adam in Genesis 3 could have no more hold on her husband than the Eve curse could have on her.

The healing of the marriage came gradually but surely, bringing with it great spiritual growth for both the woman and her husband. But belief in the curse on Eve—that her own peace, happiness, and hopes for good were dependent on the attitude and behavior of her husband—began to break the instant we identified it as such. She could see that the curse would claim to be universal, which helped her see that it was not personal, but an impersonal false belief.

Every man and every woman has a place at our Father-Mother’s table. And it is a place of deep and eternal dignity, dominion, productivity, and blessing. Now is the time to demonstrate these words of our Leader, Mary Baker Eddy: “Let the ‘male and female’ of God’s creating appear” (Science and Health, p. 249). 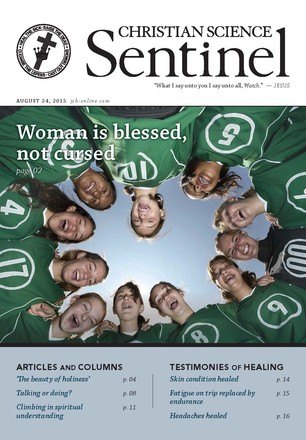 Woman is blessed, not cursed

‘The beauty of holiness’

Prepare ye the way of the Lord

Fatigue on trip replaced by endurance

God’s place in our daily lives

The water of life