Many people would gladly jump at the opportunity to live in Hawaii, but I didn’t feel the same.

When my parents told me we were moving there, I threw myself down on the ground and burst into tears. I was miserable with the idea and was a very unhappy camper. I didn’t want to feel stranded on some island in the middle of the ocean, disconnected from everything. Years later I was still holding on to the pain of leaving my “perfect” life behind in California. I was pretty much a walking pity party.

As time went on, living in Hawaii wasn’t so bad, but I still had a hard time being genuinely happy. When I did feel happy, it was because I was relying on other people and circumstances for my happiness. To me, the only thing that would fix this was if I moved back home to California.

I felt like I was faking my way through life. This resulted in feeling unconfident, ungrateful, and dissatisfied. Even though I knew this needed to be healed, I chose to push this intuition aside. And when I came back to Hawaii after a year away traveling, the unhappy feelings were back and stronger than ever. Throughout the tough times, my parents were praying about this situation and wanted me to be happy.

Eventually I realized I was not appreciating all the good God was providing for me, good that was spiritual and already present. I was either stuck in the past or living in thoughts about the future. I couldn’t find peace of mind because I was looking for it in the wrong places.

On a night when I was especially struggling with this issue, I finally turned to God. I opened up to page 58 in Science and Health with Key to the Scriptures, where Mary Baker Eddy says, “Home is the dearest spot on earth, and it should be the centre, though not the boundary, of the affections.” I suddenly felt a lot more at peace.

No longer was I relying on other people or a certain place to provide happiness.

I realized I could never be disconnected from good because God would always be there and I could never be separated from Him or the right spiritual idea of home. This was a cornerstone in the change of thought that I had. Hymn 69 in the Christian Science Hymnal says, “Give me, O Lord, an understanding heart, / That I may learn to know myself in Thee” (James J. Rome). I began to focus on what was in my heart and on purifying my motives, instead of focusing on my circumstances. And in turn that led to learning more about who I was as the child, the expression, of God, and to growing spiritually.

All of the negativity that I had been feeling about my situation completely disappeared because I started to rely on God. No longer was I relying on other people or a certain place to provide happiness. I was happy because everything became inspiring to me and I felt surrounded by God’s love. This caused me to be at peace with myself and become grateful for the opportunity to live right where I was.

I started living my life to the fullest and getting involved with different sports and making friends at school. Since I was content with my life and myself, new opportunities were constantly presenting themselves. This healing has given me a solid spiritual foundation on which to build.

Hannah Sipe will be a junior in high school in the fall and enjoys playing soccer and tennis. She also loves traveling and spending time with her friends and family.

Send a comment to the editors
NEXT IN THIS ISSUE
Bible Lens
Bible Lens—July 13–19, 2015 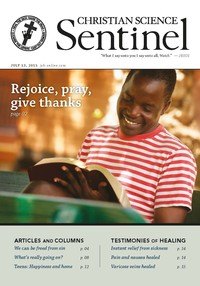