Healing and my absolute favorite sport

Will Adler
I’m an avid sports fan, but baseball is my absolute favorite. I’ve been playing since I was six (I’m 14 now), and on my team I play first base and pitch. In my down time I love following the Boston Red Sox, the St. Louis Cardinals, and my favorite team, the Atlanta Braves.

At a tournament game last spring, I was batting and the pitcher was throwing hard. A pitch fired in, hitting me right on the elbow. Even though it hurt a lot, I jogged down to first base. When I got there, I admit my first thought was: “Just tough it out, Will. It’ll feel better after you run.” My coach encouraged me to stay in the game. I knew that, as a Christian Scientist, I could “battle” in a different, more effective way by turning to God for help.

As I walked back to the dugout (after being able to steal second and third!), I affirmed that I couldn’t get hurt doing something that expressed God. After all, I was glorifying God by expressing strength, love, determination, poise, and athleticism. But my elbow still hurt, and I worried that it might have been broken. Even though there was another game to play that night, my parents and I decided to leave the ballpark so that we could go home and focus on praying. We agreed that we would rely on prayer, but would go to the hospital if it seemed like that was best (my coaches encouraged me to have my elbow examined at the hospital).

When I got home, I got on my computer and opened Concord, a computer-based concordance to the Bible and Mary Baker Eddy’s writings. As I was thinking of what word to search, the word broken came to my thought. I looked at a few citations, but none of them really hit home for me. Then I searched for bones. I read the resulting citations. But still I knew there was something more for me to find in the Bible and Mary Baker Eddy’s writings that would help me.

Then I got the idea to pray with the idea of wholeness. That was it: Immediately I thought, “I am not broken, only whole!” I really liked this passage from Science and Health with Key to the Scriptures by Mary Baker Eddy: “Reason, rightly directed, serves to correct the errors of corporeal sense; but sin, sickness, and death will seem real (even as the experiences of the sleeping dream seem real) until the Science of man’s eternal harmony breaks their illusion with the unbroken reality of scientific being” (p. 494). My spiritual reality was unbroken, so any picture that suggested I was broken in some way was an illusion. I held to this simple truth and really felt comforted.

The next day, though, I couldn’t straighten my arm, so my parents and I went to get my elbow looked at to see if it needed to be set. The doctor took X-rays and told me that I had fractured my elbow in two places. I was so disappointed! The baseball season was just starting, and I was hearing that I might be out for many weeks of play while the bones mended. I had worked almost all year training for the spring season. My elbow was put in a splint and sling to stabilize it, and I was told that I needed to see a bone specialist two days later.

During and after the visit to the doctor, my whole family continued praying. My mom told my grandmother, who was visiting my aunt and uncle in Florida, about the situation. She replied with an e-mail that said: “Tell Will we are on his newly formed team, ‘The Florida Pray-ers.’ We are absolutely sure there is no part of God’s child, his true identity, that could ever be broken. Remember that good old hymn line, Rejoice! for thou art whole! (We thank Thee and we bless Thee).” She was referring to Hymn No. 374, with words by John Randall Dunn, in the Christian Science Hymnal. I thought it was really neat that my grandma was praying with the same idea that had come to me: wholeness! I was grateful to have the prayerful support of my whole family.

My spiritual reality was unbroken, so any picture that suggested I was broken in some way was an illusion.

I kept holding to this idea of spiritual wholeness over the next two days, and when it came time for my appointment, my elbow was feeling so much better. In fact, I remember telling my mom in the car on the way there that I knew healing was taking place. I was not afraid.

When the specialist looked at the X-ray that had been taken two days earlier he studied it for a long time and didn’t say anything. Then he told us that he couldn’t find the two fractured places on my elbow. He studied the paperwork from the earlier exam and again looked carefully at the X-ray. He told us: “I can’t find any fracture. . . . I’m not sure what it was that the other doctor saw, but I don’t see it!”

I didn’t say it out loud but thought, “We didn’t see it either . . . ever!” I knew that as God’s spiritual expression I could never be broken—and now the X-ray evidence also showed that fact! I could only be God’s whole child.

There was still some discomfort, and I couldn’t fully straighten my arm, so the specialist put my elbow in a smaller splint and said I should keep it immobilized for two weeks. He added that I should plan on having several weeks of physical therapy after the splint came off, and that it would probably be a minimum of four to six weeks until I could play in a baseball game again. Since my mom and I were trying to keep our thought uplifted, we didn’t ask many questions because we did not want to accept the prognosis about when or how I would be healed. When we were back in the car my mom and I declared that I was perfect right at that moment and didn’t have to wait to see that perfection (wholeness) expressed.

Over the next few days, as we continued to pray, there was steady progress as my arm gained strength and flexibility. I decided I would like to get back out on the baseball field. My throwing arm hadn’t been hurt so I could do some drills. Also, I didn’t want to accept that the healing of my other arm had to take a certain number of weeks, so I thought putting myself back out there would let “error,” or the belief that God isn’t All, know it wasn’t going to win.

There was a big three-day tournament coming up the next weekend, and I was feeling so good that I took the sling off to participate. Everybody was surprised to see me back in the lineup so soon! I ended up playing in four games over the weekend with no problems. My elbow didn’t hurt at all, and I could move both arms freely. To top it off, I had no fear of getting hit again when I got back in the batter’s box.

I remembered something that a Sunday School teacher once told me about a major league baseball player, who was a Christian Scientist, that I have used many times in sports. This player had written on the underside of his baseball cap the Bible quote, “I can do all things through Christ which strengtheneth me” (Philippians 4:13). I also wrote this on the inside of my baseball cap to remind me that it was the Christ that gives me strength. Mary Baker Eddy writes in Science and Health, “Christ is the ideal Truth, that comes to heal sickness and sin through Christian Science, and attributes all power to God” (p. 473).

I never did have to go for physical therapy, or have to wait weeks for my healing. Turning to God healed me quickly and thoroughly. My season went great, and I am feeling and playing better than ever!

Will Adler is starting his freshman year in high school. Besides baseball, he loves to play basketball and tennis. He also enjoys hanging out with his friends and his brother, Jack. 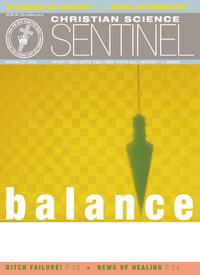