There is a shade of difference between the meaning of these two words, the study of which will repay the time and attention expended on it. Purpose is the thing intended; motive is the reason for the intention. The story of David and Goliath from the first book of Samuel will serve very well as an illustration. When David sallies forth to meet Goliath, his declared purpose is to destroy the giant, his motive is the vindication of God's protecting care for His people.

Purpose: "This day...I will smite thee, and take thine head from thee; and I will give the carcases of the host of the Philistines this day unto the fowls of the air, and to the wild beasts of the earth."

Motive: "Thou comest to me with a sword, and with a spear, and with a shield: but I come to thee in the name of the Lord of hosts, the God of the armies of Israel, whom thou hast defied.... That all the earth may know that there is a God in Israel."

In these two utterances, boastful as they may at first appear, one is left in no doubt as to what David intended to do and his reason for doing it. It seems from the narrative that to David, called from the care of his father's flock, the issues appeared very simple, and while everyone else was hesitating or vacillating from fear of the consequence, David had no doubts. His purpose and motive were as clear as daylight, so why hesitate? Why hesitate! Why does one hesitate ever? Perhaps for the very reason that purpose and motive are seldom so perfectly attuned as in this case.

In "Science and Health with Key to the Scriptures" (p. 326) Mary Baker Eddy writes: "The purpose and motive to live aright can be gained now. This point won you have started as you should. You have begun at the numeration-table of Christian Science, and nothing but wrong intention can hinder your advancement." Therefore, the bringing of purpose and motive into line so that they are perfectly attuned is the very "numeration-table of Christian Science," in other words, the first and simplest of duties to be performed. From this also one observes that purpose and motive cannot ever be properly attuned, except from the standpoint of right thinking and living. In David's case there is no self-seeking, no envy, no aggression, but only the desire to make it known that there is a God in Israel. His purpose and motive being perfectly attuned, he becomes endowed with almost superhuman power.

Now, take an instance where purpose and motive are not properly attuned, our Lord's parable of "the rich man" (Luke 12:16). In the hour of prosperity the rich man says: (Purpose) "I have no room where to bestow my fruits. ...I will pull down my barns, and build greater; and there will I bestow all my fruits and my goods." (Motive) "I will say to my soul, Soul, thou hast much goods laid up for many years; take thine ease, eat, drink, and be merry."

But is this good enough? Here is a case in which purpose and motive can never be perfectly attuned, because not right living but self-indulgence is the intention, and the judgment of Truth is. "Thou fool, this night thy soul shall be required of thee."

"But," says the indignant sympathizer, "if he hadn't big enough barns in which to store his crops, wasn't it common sense to build larger ones?" This is the kind of argument which error uses to suggest a reasonable purpose as cover for its own false intention. If the motive is wrong, it cannot secure for its own purpose the buoyancy and power which go with a motive and a purpose that are properly attuned.

Mrs. Eddy writes (Miscellaneous Writings, p. 371). "To sympathize in any degree with error, is not to rectify it; but error always strives to unite, in a definition of purpose, with Truth, to give it buoyancy." The only way to become expert in the detection of this effort of error is through a constant study of the life-purpose of the Master. He who would most effectually detect the counterfeit must have intimate acquaintance with the original, and to understand the Master's purpose calls for a constant study of his sayings and actions as recorded in the Gospel narrative. And doing this, in the light of Christian Science brings a confidence and assurance such as can be supplied in no other way. Note also that the time for doing it is now.

When the purpose is clearly defined and attuned to the motive, timidity and hesitation will disappear. Some people were startled at the wording of the declaration which was signed at Teheran on December 1, 1943. by the representatives of the three powers. They felt alarmed at the arrogancy of purpose which they thought they perceived, for it said that "no power on earth" could prevent the Allies destroying the forces of the enemy on land, by sea, and in the air. But it also declared the motive which lay back of this purpose in terms which left no doubt as to its righteousness: "We recognize fully the supreme responsibility resting upon us and all the United Nations to make a peace which will command the good-will of the overwhelming masses of the peoples of the world, and banish the scourge and terror of war for many generations." Had the doubting ones recalled the attitude of David towards his opponents, they might have seen that in this case, too, purpose and motive were perfectly attuned to the keynote of right living, and consequently there was no room for hesitancy or mincing of words.

To the Christian Scientist who is in need of some rule which he can apply to his purpose and motive by which to test whether they are perfectly in tune, there is given in the Church Manual by Mary Baker Eddy "A Rule for Motives and Acts" (Art. VIII. Sect. 1), which provides him with an exact yardstick for the purpose.

Complete obedience to this rule will give him the single-mindedness of a David as well as a deeper insight into the purpose of the Master, thus providing him with the motive which will govern all his actions. He will become a follower not in word only, but also in doing the works which Jesus promised that his followers should be able to do—the casting out of evil and the healing of the sick.

Copyright, 1944, by The Christian Science Publishing Society, One, Norway Street, Boston 15, Massachusetts. Entered at Boston post office as second-class matter. Acceptance for mailing at a special rate of postage provided for in section 1103, Act of October 3, 1917, authorized on July 11, 1918. Published every Saturday.

Send a comment to the editors
NEXT IN THIS ISSUE
Article
The Christian Science Reading Room: An Open Door 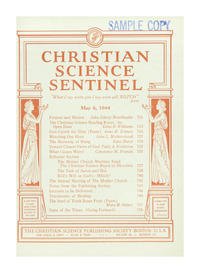