When I married a graduate student with limited income and moved far away from my family to live with him, I expected I would celebrate a much more modest Christmas that year than what I had enjoyed while growing up. I had accepted this, but I was stunned when I learned later that I would have to work straight through Christmas and miss celebrating it altogether! But that’s when I was forced to discover more about the true sense of Christmas as being about selfless love, as honoring the selfless love of Christ that God has given humanity.

I held a management job in a large retail store. As the newest hire, I was assigned the night shift for four straight weeks, during the Christmas season and lasting through New Years’ Day. Every night, a team of a few experienced staff members, along with several temporary hires, worked to restock the entire store. Because of the high volume of business, we were told that, in addition to being stuck with the night shift, on Christmas Eve we would start working in the daytime, and go straight through until Christmas morning without any time off.

Since I was working all night and my husband was busy during the day, I despaired of us having any time together, or of having any time to prepare for the holiday. I felt as though I was being robbed of all the goodness I associated with Christmas.

Additionally, things had become strained at work. The temporary hires proved to be unmotivated to get work done. Since their jobs were temporary, they may have felt little need to excel. Some were homeless, while others were from remote areas, living out of their cars, trying to make some money to take back home. Some had drug and alcohol problems and had to be fired. We were getting further behind, and my boss was unhappy with me and the team. I resorted to mentally condemning the staff for their laziness and insubordination. At the same time, I was suffering from a constant headache due to stress and sleeplessness. I felt as though I had hit a low point and was wallowing in self-pity.

That’s when I mentally cried out to God to help me. I couldn’t stand it anymore. I prayed that God would deliver me from that job. Instead, I was startled when, in response to my prayer, a thought came to me that I needed to be delivered from myself (from a wrong sense of self as material and mortal instead of spiritual and immortal), and from self-righteousness and self-pity.

A thought came to me that I needed to be delivered from myself.

I was stunned by that thought, but as I prayed, some further questions came to me to consider: Wasn’t the real meaning of Christmas about the Christ coming to humanity, delivering everyone from evil through the love of God? Didn’t Jesus provide the perfect example of utter selflessness—of devout consecration to God and of dedication to loving and healing others? Couldn’t I begin in some way to follow in Jesus’ footsteps and to love those who were around me, including my fellow workers?

Those questions hit home, and I was deeply ashamed and humbled. I felt as if I was waking up to God’s truth and reality, instead of clinging to what I thought should happen humanly. I recalled a passage from the Christian Science textbook, Science and Health with Key to the Scriptures by Mary Baker Eddy: “The sharp experiences of belief in the supposititious life of matter, as well as our disappointments and ceaseless woes, turn us like tired children to the arms of divine Love. Then we begin to learn Life in divine Science” (p. 322). I felt like a tired child all too ready to let God take over. It was time to forsake the error of self-pity and rest in divine Love.

It dawned on me that I could celebrate Christmas by looking for God’s good expression reflected in each person with whom I worked. As I started to do this, the headache disappeared permanently, and my joy returned. I loved looking for evidence of God’s goodness in each of my fellow workers, and I began to earnestly appreciate and love them. The team began to be more productive, and my boss commented on the progress.

Yet as Christmas Day approached, several were still unhappy about missing Christmas celebrations with their families and friends. As I prayed about this, it came to me to suggest that we plan a Christmas dinner for the team that we could eat in the middle of the night before Christmas Day during our 2:00 a.m. break for dinner. I asked if each worker would be willing to bring a dish, and all agreed.

When the night came, I decorated the employee lunchroom using Christmas decor from the store that had either been broken or returned. I set the table with mismatched paper goods that the staff had donated for this dinner. As the employees walked in, one young man, who was homeless, gasped and said, “This is so beautiful!”

Before we ate, someone insisted that I say grace. I looked around at our very diverse group and wondered what I should say. I silently asked God what would be appropriate, and the thought came to me to just speak my heart. I began: “Like others here, I was feeling sad that I was going to miss Christmas with my family. But God brought us together to be a kind of special Christmas ‘family’ for one another, to share God’s joy and love. I’m so grateful for everyone here, and it’s a blessing to share this occasion together. Thank you, God, for this opportunity to have Christmas with this precious group. Dear God, thank you for all Your love tonight.”

After I said grace, there was quiet and even a few tears in some eyes. The stillness was sweet and almost holy. Then we all began enjoying our humble dinner. One person shared a funny story of a Christmas party gone wrong, which was so humorously described that all laughed heartily. Our joy transcended racial, cultural, and religious differences. God had brought us together in love, and we experienced a glimpse of the Christmas harmony that the angels sang about: “Glory to God in the highest, and on earth peace, good will toward men” (Luke 2:14).

Before I left work later that morning, one man who had been at the dinner came up to me, looked me in the eye, and said: “I was married with children but took to drink and lost everything. I’ve come to terms with that, but every Christmas since then has been difficult, so I would always drink myself into oblivion to forget. But not this year. This year was the best Christmas I ever had.” Before I could say anything, he quickly walked away. I was deeply touched. I thanked God for giving me this precious Christmas, rather than the one I had outlined. I felt this Christmas had been a true celebration of the Christ and divine Love.

When I arrived home later on Christmas Day, my husband was waiting to hug me and try to lift my spirits, but he found that wasn’t necessary. I burst in telling him I had already had the best Christmas ever while at work the night before. Never again would all the glittery trimmings and presents be as important as helping others to know and feel the love of Christ. My husband and I made a pact that day, that future Christmases would be first and foremost about selflessness and love, even more than about upholding family traditions or being with certain people. There have been many Christmases since then, and that promise has been kept.

Mrs. Eddy wrote, “The best man or woman is the most unselfed” (The First Church of Christ, Scientist, and Miscellany, p. 165). The Christmases when I have needed to be the most unselfed have turned out to be the most joyous. Sometimes I have been called to help others in need by praying steadfastly for them. Through those prayers I have found the deepest satisfaction and a true sense of the Christ come to earth. Now, each year Christmas for me represents a unique gift from God, not just a human celebration. I’m no longer outlining what Christmas should be but loving what God is revealing about the goodness of Christ come to humanity in selfless love. When I have learned and expressed more of that selfless love in my own life, then I have enjoyed the best possible Christmas. 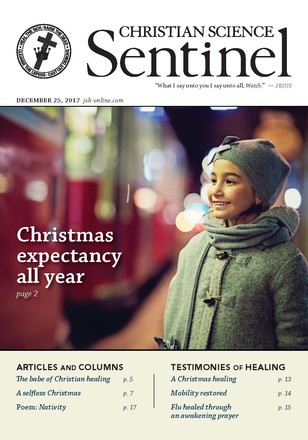 The babe of Christian healing

‘A God of love only’

Christmas after a divorce

Flu healed through an awakening prayer

By The Monitor’s Editorial Board | December 2017