"It's not fair!" said one of the girls at my table in the cafeteria as I pulled out the Hostess cupcake my mother had packed in my lunch bag. "You get to eat whatever you want and stay so skinny." She grimaced at her bag of rice cakes and turned toward me with a face that conveyed deep resentment.

After hearing such comments repeatedly in middle school, I began to be concerned about my weight and body image in a way I never had been before. I had always been taught to eat what tasted good when I was hungry for it and to stop eating when I felt satisfied. Sweets had never been off-limits in our house. Now all of a sudden my eating habits, along with what apparently were other quirks, were turning me into an outcast. I felt that I had no real friends. I was sure I would always be that geeky girl no one wanted to talk to. As I read over the journals I kept during those years, I see passages where I questioned whether it was worth it for me to continue living.

In an effort to fit in, I began to eat less of the coveted sweets my mother used to pack. I had always been called skinny, but I started to feel that I was not thin enough. I severely cut my food intake except on holidays, when I would ravenously devour large amounts of my mother's delicious cooking after weeks of "saving up." Years later, I saw a photograph of myself during this time, and in it I look positively emaciated. I was about 5 feet 4 inches and weighed only 83 pounds. (My normal weight at that height should have been about 115-120 pounds.) My teachers and parents were very concerned, but I denied that there was any problem. Clearly I had all the symptoms of anorexia.

I was sure I would always be that geeky girl no one wanted to talk to.

Because body image and one's relationship to food are so connected with one's whole identity, I believe it is very effective to rely on spiritual healing to overcome eating disorders. While I was resistant to discussing my problem or receiving any help, I know that my mother was praying with all her heart for my health and well-being. However, much of what she said in an effort to encourage me only made me more frustrated. I do remember one sentence, though, that she shared with me from Science and Health with Key to the Scriptures by Mary Baker Eddy: "The eternal Truth destroys what mortals seem to have learned from error, and man's real existence as a child of God comes to light" (pp. 288-289).

That simple statement stuck with me. I saw that my body image, based on the comments of others and my misconceptions about what the standard should be, was distorted and unhealthy. Slowly but steadily, I began to see myself more and more as a creation of God. I saw that my worth as a person was not dependent on my physical appearance.

As I realized more fully the worth inherent in my spiritual identity, my focus began to turn outward, away from myself and toward the world around me with its boundless opportunities. The image of myself as a shy nerd was shattered when I got involved with theatrical productions at school. These activities connected me with other students who shared similar interests, and I became less inhibited. I distinctly remember the first night I "hung out" in high school, forgetting about myself and enjoying the company of new friends. I realized that through my awakened realization of my identity as a child of God, I had lost the intense fixation I'd had on my body and was not as concerned about what I was eating.

Somehow I got up the courage to ask a really cute boy to the prom, and he said yes! The very next morning I began menstruating again after a two-year hiatus. My weight gradually stabilized, and I was able to maintain a more balanced diet.

I often recall this healing when I face what look like insurmountable challenges. It helps me see them as providing new opportunities to witness my "real existence as a child of God," without limits imposed by other people or myself. 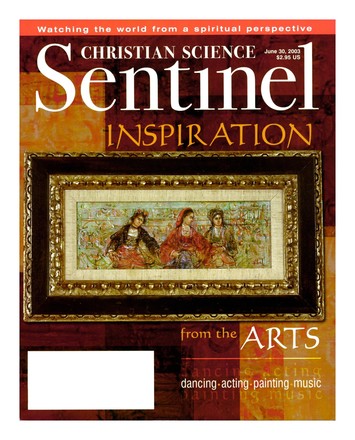 By J. Michael Parker with contributions from Todd Spangler | June 2003

Creative power—right when I needed it

Conversation on an awakening

At work for the good of it

By Steve Carlson with contributions from Georgia Engel | June 2003

Always trying for the best she can do

Strings of the heart on I-84

Leading a life of 'superclarity'

A healing of anorexia