It was a highly charged situation. An indignant governing council had tossed a group of men into prison for espousing what was perceived to be heretical religious doctrine. And after the prison doors had been wondrously opened and the men walked free, they had gone right back to their preaching (see Acts 5:17–42).

A captain and officers rounded up the men, a group of Jesus’ apostles, and brought them to the council. When Peter and the other apostles were severely reprimanded for continuing to preach Christianity, they courageously responded, “We ought to obey God rather than men.” Their statements in defense of their work appeared to intensify the rage among the council members; the council wanted to kill them.

Then a member of the council who was a highly respected religious leader and expert on Jewish law stood and spoke up. His name was Gamaliel. He ultimately saved the apostles’ lives by warning the council against killing them, saying, “Refrain from these men, and let them alone: for if this counsel or this work be of men, it will come to nought: but if it be of God, ye cannot overthrow it; lest haply ye be found even to fight against God.”

In essence, he told the council that if the apostles’ teachings had no truth behind them, no divine power impelling them, then there was no reason to kill them, for their words would hold no influence and would fade away to nothing. On the other hand, if their preaching was indeed of God, the council certainly would not want to be aligned against it or be guilty of hindering it in any way.

Gamaliel’s sense of right prompted him to voice what he considered true, potentially risking fury or loss of respect toward him.

The council obliged by not killing them, but commanded them not to speak in the name of Jesus, and then let them go. The apostles, however, promptly went back to teaching and preaching about Jesus.

I’ve always admired Gamaliel for his courage, logic, and foresight. It must have taken courage to stand up to the angry council and advocate for those who wouldn’t abide by their edicts. The easiest course of action would have been to stand by and do nothing rather than voicing what he considered true, potentially risking fury or loss of respect toward him.

The logic he employed to save the men was wise and difficult to refute, and it established an axiom, sometimes referred to as Gamaliel’s principle, the premise of which “is that the long-term course of future events—consequent to a particular antecedent event—is strictly correlated with the truth quality of the antecedent event” (“Gamaliel’s Principle,” mathpages.com). In other words, in this usage, whether actions or words are of God or of men is determined by what future events show forth. For example, it can be said that subsequent centuries of genuine Christianity’s healing and saving benefit to humanity proved the value of Jesus’ teachings, and thus the value of saving the apostles.

The political scene today is often highly charged with emotion and fervent human opinions. At this time, and for all time, we can follow the example Gamaliel set many centuries ago. Only ideas with real truth behind them will ultimately reign. And we can trust that right concepts such as love for humanity, forgiveness, humility, justice, integrity—will emerge more definitively as we value and nurture them, both individually and collectively.

Mary Baker Eddy was the Discoverer and Founder of Christian Science, which elucidates the source and basis for concepts that have real truth behind them. This basis includes God creating the true, spiritual identity of each of us to express God’s goodness and purity. Mrs. Eddy was respected by many as a religious leader and innovative thinker, and her views were often sought on the issues of her day. Around the time of the United States presidential election of 1908, the Boston Post newspaper published the following statement from Mrs. Eddy:

“Mrs. Mary Baker Eddy has always believed that those who are entitled to vote should do so, and she has also believed that in such matters no one should seek to dictate the actions of others.

“I am asked, ‘What are your politics?’ I have none, in reality, other than to help support a righteous government; to love God supremely, and my neighbor as myself” (The First Church of Christ, Scientist, and Miscellany, p. 276).

With that brilliant comment, Mrs. Eddy provided the highest guidance for behavior. Supporting a righteous government is ultimately something we all want to do, regardless of our political persuasion. And loving God and our neighbor is the basis for solving so many of the world’s problems—including crime, income inequality, discrimination, and war.

We can trust that right concepts will emerge more definitively in society as we value and nurture them.

Mrs. Eddy moved far past surface turmoil, and went on to explain the nature of real truth as spiritual—as God, divine Spirit, infinite Truth. And Truth lasts and heals both individuals and nations. Prayer based on divine Truth enables us to rise above political infighting and intransigent views to catch a glimpse of God’s almighty power, governing all in harmony and goodness.

Years ago I attended a small gathering that featured a US presidential candidate (who ultimately became president). Prefacing a question to him with the caveat that he and I seemed to be far apart politically on many policies, I asked why I should support him. He replied that although we may disagree on policy, at heart we all wanted the same things: good schools, safe streets, equal justice, dependable economic growth, national security. To me, these are aspects of the righteous government to which Mrs. Eddy referred, when brought about through wise, principled, and just governance.

I try to remember Gamaliel’s example whenever political discussions get heated. A focus on conflict—sometimes very personal conflict—can obscure the true, spiritual fact that we are all actually children of God, one in the brother-and-sisterhood of spiritual creation. We are all exposed to opinions, sometimes very different than ours, through the media, online, or in personal situations. Tumultuous times demand more than ever that we maintain our emotional and mental poise and trust in God’s government, with the expectation that it can be manifested ever more clearly. 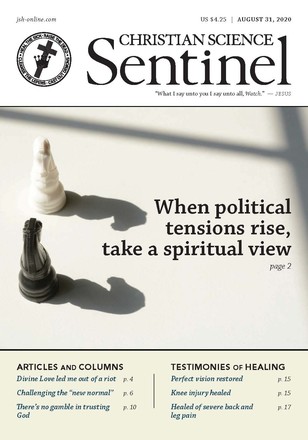 There’s no gamble in trusting God

A quick healing at camp

Healed of severe back and leg pain

You belong to God