When I was a freshman in college, I went to a Wild West themed party where they had a mechanically operated rodeo bull. You are strapped to the bull with only a rope to hold onto, and then flung around harder and harder until you can’t hold on any more. When it was my turn to ride, I was pretty excited because I’d never ridden one before! After the first big buck, however, I felt my hand bend under the rope, and before I could yank my hand away, I felt it snap. I fell off the bull, dazed, and chose to quietly walk away in order to not attract any attention, and to settle my thought.

I’d been raised in Christian Science, and I was accustomed to praying for healing of physical challenges, including injuries. I knew prayer could help, but was God’s presence really at a rowdy college party like this? Had I separated myself from God by attending this event? I felt pretty stupid about letting myself get into this situation, and I wasn’t sure what I should do. When I arrived back at the dorm I called my mom, telling her what had happened. I was trying to calm down, but the pain had started to get worse at this point, and I was panicking. My mother could hear how worried I was and told me it was perfectly fine to go to the hospital if I felt that was right. I had a choice. My roommate offered to drive me, and I accepted.

At the hospital, they X-rayed my hand and told me I’d broken it and that it would take at least two months to heal. The doctor said he would prescribe me some pills, and also asked me to take some of the medication while I was there. At this point I had calmed down, and even though the pain was still there, I told him I’d rather not take the pills, and that I wanted to turn to prayer alone for healing instead. He said he’d be back in five minutes, and if I wasn’t feeling better by the time he came back, he would write me a prescription. When the doctor walked out, I silently said, “OK God, what do I do?” And right away the words to Hymn 412 in the Christian Science Hymnal came to my thought: “O dreamer, leave thy dreams for joyful waking” (Rosa M. Turner).

In that moment, I saw that I did not have to assign any cause for this pain—just like in a dream, you don’t worry about why you are in whatever situation you’re dreaming. And if there was no cause, then there could be no effect, there could be no pain. I had also been blaming the operator of the mechanical bull for strapping me in wrong, and I had been blaming myself for even going to this party. But this angel message about waking from the dream showed me that this blaming was just assigning another cause to explain the pain. I could replace that blame with gratitude for the mechanical bull operator helping everyone have a fun time, and with gratitude for getting to be at that party, hanging out with my friends, and sharing joy with them. At no time had I been (or could I ever be) separated from God, and at no time did that joy have to turn into pain! And suddenly, right as I was rejoicing in this awakening, there was no more pain.

The doctor returned to hear me humming the tune of Hymn 412. I smiled and said I didn’t need to take the pills or have a prescription. He was glad to see me doing so well.

Later, when I got my hand wrapped in a cast, the medical staff repeated the earlier estimate of two months to heal. But I knew that this spiritual awakening I’d just had was ongoing, and I didn’t have to accept a certain time frame for healing. Since I took time off from my usual activities at the gym and karate class, I was able to dive into other venues of life, spending time with friends and focusing on spiritual study. During this time, I learned even more about the loving ever-presence of God.

I didn’t feel further pain from my hand, and I gradually began to peel away the bandaging on my cast. I requested a check-up with the doctor about two weeks after the initial incident, and when the doctor took a look at what was left of my cast, he decided it was ready to be removed. We both saw that I had full functionality and strength in my hand.

Whether I went to more parties or stayed in my room studying, I’d learned I would always simply be the expression—the effect—of God, the one cause. 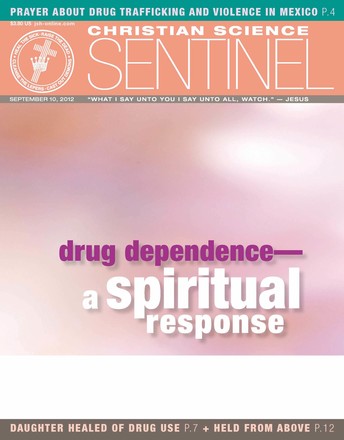 Prayer about drug trafficking and violence in Mexico

Daughter healed of drug use

Contribute to freedom – Take part in the solution

No more drug use

By Debbie Miller with contributions from Andrew Christopher Miller | September 2012

A prayer for the economy

No need to gamble–You have it all!

'Streams of love' that reverse drought

Learn to refuse the myth of matter

For Sikhs, turban is a proud symbol–and a target

Our family: under the Father-Mother's care