Humanity owes many of its liberties to the vision of isolated individuals who through the centuries have protested personal, international, and ecclesiastical tyranny.

No more penetrating protest is recorded than that of Christ Jesus. His work freed men from long-standing deformity, from deafness and blindness, from immorality and death, as well as from fear of the dark, ecclesiastical concept of hell.

The Discoverer and Founder of Christian Science, Mary Baker Eddy, reveals that Christ Jesus' healing method was scientific prayer —prayer that protested deeply and conscientiously man's exemption from discord and incapacity and avowed his likeness to God, his Father, from whom he is inseparable as idea. Such prayer was notably practiced by Mrs. Eddy herself, and through her writings we can learn to pray the healing prayer of true protest.

Christian Scientists indeed cherish Mrs. Eddy's rejection of the iron doctrine of predestination, which was held by the orthodox church to which she sought admission when she was twelve. Her earnest protests against this theory of the eternal condemnation of unbelievers deeply moved the church members present, and she writes in her autobiography, "Retrospection and Introspection, " "To the astonishment of many, the good clergyman's heart also melted, and he received me into their communion, and my protest along with me." Ret., p. 15;

The mounting difficulties of severe human experience finally led Mrs. Eddy to expand this early protest to include every type of problem to which mankind seems subject. Today through her spiritual researches into the works of Christ Jesus and through the church which she founded, those individuals who protest against the theory of man's inevitable subjection to discord can gratefully verify the legitimacy of their protest and learn the method of advancing it to the point of spiritual healing.

The writer has experienced this blessing. From childhood she had had little appreciation of human life, since its evident difficulties appeared to defy human solution. Her protest against the doctrine of man's inherent sinfulness later left her without a church. With what joy she discovered through Christian Science that her protests against the dismal concepts of mortality were indeed right intuitions. Within the wide mission of the Church of Christ, Scientist, she now finds opportunity to improve the Christianly scientific, nature of her protests in living a life of deepest interest and satisfaction.

The chapter "Christian Science Practice"' in the textbook of Christian Science, "Science and Health with Key to the Scriptures" by Mrs. Eddy, is rich in admonitions, variously phrased, that we should protest discord. She writes: "When the body is supposed to say, 'I am sick,' never plead guilty. Since matter cannot talk, it must be mortal mind which speaks; therefore meet the intimation with a protest. If you say, 'I am sick,' you plead guilty. Then your adversary will deliver you to the judge (mortal mind), and the judge will sentence you." Science and Health, p. 391;

This same chapter shows the application of this attitude of protest, or agreement to disagree, to the healing of such imprisoning problems as pain, injury, fatigue, contagion, and chronic and acute diseases.

Christ Jesus' own decisive, prayerful dismissals of evil were based on the understanding of such truths as this from the book of Job, concerning God: "He will not afflict." Job 37:23; The Master carried his vigorous disagreement with error to vigorous agreement with the spiritual facts of Truth.

All that merits scientific protest is seen, felt, or heard through the material senses. And grave today is the need for Christian Scientists to keep on protesting scientifically that which denies the all-loving nature of God, the divine Principle of being. Daily reports from all parts of the world crying hatred, murder, disease, sensuality, superficiality, as well as the seemingly insoluble complexity of universal problems, infiltrate human consciousness, arguing for the acceptance of evil.

Such reports, though irreconcilable with spiritual reality, as the Christian Scientist well knows, sometimes infiltrate consciousness so persuasively as to depress the spiritual conviction and repress the scientific protest that handle aggressive suggestions with finality.

Or again, the student may be lulled into progressively unprotesting acceptance of a mortal view of life through the sheer passage of time and its persistent associations and difficulties. Confusion and apathy must be faced if the destructive course of materialism's discords is to be arrested in the lives of men.

We prevent the infiltration of the mortal miasma and keep scientific protest keen and effective when we claim our God-given exemption from mesmerism and agree only with our native attraction to the things of Spirit. God's child is inevitably attracted to the kingdom of God; he is forever energized by the discernment of spiritual reality. And because of the spiritual nature of his true senses, he cannot respond to materiality's apparent attraction, but wholly responds to Truth.

Conscientiously guarding his power of scientific protest as one of the means of his salvation from the impositions of mortality, the Christian Scientist keeps on protesting on his own behalf and that of humanity. Neither time, familiar sense testimony, weariness, lack of compassion for his fellows, nor the impact of daily news can weaken or undermine his scientific protest against all that would misrepresent God and man.

He takes as his model the unqualified devotion of Mrs. Eddy to the vital practice of Christian Science, evident in a passage from "The First Church of Christ, Scientist, and Miscellany." Here, writing of her great love for her students, she says, "Difficulty, abnegation, constant battle against the world, the flesh, and evil, tell my long-kept secret—evidence a heart wholly in protest and unutterable in love." My., p. 134 .

May students of Christian Science everywhere improve the quality of their protests and keep on protesting! 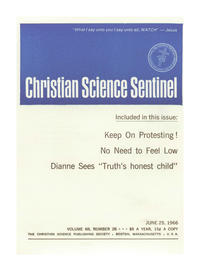