[We are glad to give a prominent place to the following important article, also the letter to Mrs. Eddy which accompanied it. The correct interpretation of the Scriptures is of the utmost moment in individual study as well as in our public services, and we feel sure that our readers will derive much help from Professor Hering's thoughtful analysis of the three verses to which he has had special occasion to devote careful study.—Editor.]

It may interest the First Readers of our Churches and Societies, as well as other students, to examine the renditions of I John, 3: 1,2,3, given by various writers and translators.

The capitalization given this passage by our Leader on page 460, Vol. III., of the Sentinel is significant:—

"Behold, what manner of love the Father hath bestowed upon us, that we should be called the sons of God; therefore the world knoweth us not, because it knew him not. Beloved, now are we the sons of God, and it doth not yet appear what we shall be: but we know that, when He shall appear, we shall be like him; for we shall see him as He is. And every man that hath this hope in him purifieth himself, even as He is pure."

The Revised Version has it:—

"Behold what manner of love the Father hath bestowed upon us, that we should be called children of God: and such we are. For this cause the world knoweth us not, because it knew him not. Beloved, now are we children of God, and it is not yet made manifest what we shall be. We know that, if he shall be manifested, we shall be like him; for we shall see him even as he is. And every one that hath this hope set on him purifieth himself, even as he is pure."

Rotherham gives it in his translation:—

See! what manner of love the Father has given to us, that children of God we should be called, and we are! Wherefore, the world understands not us, because it understood not him. Beloved, now are we children of God; and never yet was it made manifest what we shall be: we know that, if perchance it should be made manifest, like him we shall be, because we shall see him according as he is. And every one that has this hope on him purifies himself according as he is pure." (This last "he" is strongly emphasized in the Greek.)

"Just think what a wealth of love the Father has lavished upon us, in order that we might be called children of God: and such we are! For this reason the world does not know us, because it did not know Him. Friends, we are now children of God: and it is not yet revealed what we shall become. But we do know that when He is manifested, we shall be like Him; because we shall see Him as He actually is. And every one who has this hope in Him will purify himself, as He is pure."

"Think what love the Father has shown us in allowing us to be called 'God's Children;' as indeed we are. The reason why the world does not know what we are is because it has not learnt to know him. Dear friends, we are God's Children now; what we shall be in the future has not yet been revealed. What we do know is that, if it should be revealed, we shall be like Christ; because we shall see him as he really is. And every one who has this hope in regard to Christ tries to make himself pure—pure as Christ is."

These show that the words "he" and "him" in the three verses quoted are pronouns for Deity, and refer to God and God's appearing, or the Christ; and a very helpful interpretation is obtained when read with this in thought. Thus the third verse reads substantially, "And every man that hath this hope in God (in God's appearing, or the Christ) purifieth himself because God is pure." A wonderful wealth of wisdom awaits us in these words of the "beloved disciple."

Undue emphasis is sometimes placed on the pronoun "we" in the first verse, "that we should be called the sons of God," as though we were the only ones. The important fact in that sentence, as well as in the second verse, is that we are actually or in truth sons of God and not sons of men, in correlation with the "scientific statement of being" previously read, which says that "man is spiritual and not material."

The order in which our Leader has asked that these selections be read is also important. First, the "scientific statement of being" (and it should always be stated that this is from the Christian Science text-book), and then the announcement of the reading of the "correlative selection from I John, 3: 1,2,3." The fact that this selection is a correlative is important, and the announcement, coming after the reading from Science and Health, makes it possible for strangers and those not familiar with the Bible to know where our Leader's words end and those of St. John begin, which is difficult when these passages are read consecutively.

We feel deeply grateful to our Leader each Sunday for this beautiful ending of our Sunday service. These passages seem to be the kernel and epitome of all the Lesson-Sermons and are like the preacher's "Let us hear the conclusion of the whole matter." They place the seal of divinity on the service, after which we shall do well to go to our homes, enter our closet, shut the door of the material senses, meditate on the wonderful truth we have heard, and make it our own.

Send a comment to the editors
NEXT IN THIS ISSUE
Article
Dearly Beloved Leader:—During my recent lecture tours... 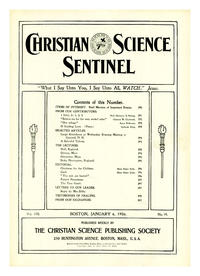