Love: The basis for a renewed democracy

Over the centuries,  political philosophers developed the theory that democracy is a social pact in which people, for their own good, submit themselves to collective decision-making. But even the strongest of democracies needs constant renewal. How can this be accomplished? What if love broadened our interest beyond ourselves to include all mankind? What if we all had an interest in loving for the great fulfillment and joy that come from knowing who we truly are as children of God, Love? That would be the basis for a new, unifying social contract.

The book of First John in the Bible says that God is Love. And Jesus illustrates God’s nature as Love in the parable of the prodigal son, in which a compassionate father welcomes back his son, who has treated him most disrespectfully and wasted his inheritance before finally admitting his wrongdoing. The father rejoices in his son’s return, showing how God sees and loves each one of us—not as an imperfect human being but as His spiritual expression.

Since our origin, our Father-Mother, is divine Love and infinite Spirit, it’s our nature to be loving and spiritual. This means that the aggressive language sometimes used in politics, the virulent attacks, and the tendency to think of those whose policies we oppose as enemies, are not only profoundly anti-democratic but also profoundly alien to our true selves.

Also in First John is a provocative passage rich with promise: “We know that we have passed from death to life because we love one another. Whoever does not love abides in death” (3:14, New Revised Standard Version). It is only divine Love, lived practically in our daily experience, that enables our political systems to metaphorically pass from death to life—to be renewed and strengthened.

Aggressive language, virulent attacks, and the tendency to think of those whose policies we oppose as enemies are not only anti-democratic but also profoundly alien to our true selves.

It’s vital to keep the poison of hate out of our thoughts, our lives, and our democracies, and we can do that most effectively by not fearing the supposed power of hate and by demonstrating its powerlessness. How? By starting from the higher standpoint of seeing that divine Love, the only creator, hasn’t created hate—that hate does not exist in the Mind that is God and can only seem to exist in the darkness of the human mind. This is key to being lifted above hate and feeling the love and affection that are native to us as children of God.

Here’s a modest illustration of the unifying power of Love. Some years ago our local branch Church of Christ, Scientist, which is run democratically, faced a controversial question that had already challenged a number of other Christian Science churches, with unhappy results. At our business meeting a motion was made to love those on both sides of the question. The motion was seconded, voted on, and passed. Through divine inspiration the group had gotten past the mesmerism of vilifying those on the other side. Then one of the most vocal members proposed an action that was tremendously unifying, and that too passed, ending the controversy. It never bothered our church again.

As we see more clearly the reality and power of Love—and the consequent powerlessness of hate to divide, mesmerize, and destroy—we begin to understand and feel something that undergirds and renews democracies. We begin to know that beyond different public policies and approaches to solving social problems, beyond even the worst public rhetoric and manipulation of facts, stands the fundamental unity, fellowship, and affection that come from God, the one Father-Mother creating man (each one of us) as spiritual, reflecting His nature. We become more capable of separating what is spiritually true in human character from what is false, more patient and forgiving, more willing to see another’s point of view.

This makes us receptive to practical solutions and better able to keep our political discussions civil and kind. We participate more intelligently in the political system, including by how we vote.

In answer to a question about what her politics were, Mrs. Eddy wrote, “I have none, in reality, other than to help support a righteous government; to love God supremely, and my neighbor as myself” (The First Church of Christ, Scientist, and Miscellany, p. 276).

There is no power in heaven or on earth greater than Love—no power more able to bring renewal to democracies and inspiration to those seeking democratic government around the world. As we recognize Love as supreme, the only real ruling authority, God helps us put aside hate and conflict and live Love, showing our true nature as children of Love.

Send a comment to the editors
NEXT IN THIS ISSUE
Article
Facing division? Side with God! 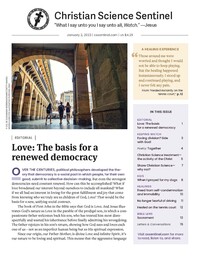