To many, the parable of the prodigal son is perhaps the most relatable of Christ Jesus’ parables in the Bible because of its compelling account of redemption, forgiveness, and grace (see Luke 15:11–32).

It’s a tale of two sons: an older son who stays home and a younger­—­the prodigal—who rebels by asking his father for his inheritance and leaving home for a “far country,” where he “wast[es] his substance” by living recklessly. After his resources run dry and a famine comes to that country, the young man hires himself out to a farmer to feed his pigs. Hungry, he longs to eat even the pods that the pigs eat, but he is not given even these. Eventually, seeing the error of his ways, he returns home to his father. But the older son, feeling he has led, by comparison, an exemplary life, is dismayed at the joyful reception given his brother.

Jesus told the parable to religious leaders, who had questioned his association with “sinners.” You might say they thought of themselves as the favorite child and regarded others, which some Bible commentaries suggest are represented by the younger son in the parable, as inferiors who didn’t deserve to inherit the kingdom. Yet the moral of Jesus’ parable was that our ever-loving heavenly Father, represented by the prodigal’s earthly father, sees every one of His children as worthy and deserving of His eternal love.

It seems to me that we fully understand the import of the life lessons that Jesus was trying to convey when the parable is seen through a spiritual lens. I’ve found that the study of Christian Science provides us with that lens, and through the years it has shed further light on this parable, on the entirely spiritual nature of man, and on God’s unbreakable, loving relationship to His children.

In that regard, I have come to particularly appreciate one phrase in the parable, perhaps easily overlooked, on which the entire story hinges—the three words that represent the turning point for the prodigal. Christ Jesus says that the prodigal, at his lowest point while feeding the swine, “came to himself.” Some Bible translations render the phrase “he came to himself” as “he came to his senses.” According to the story, the prodigal’s sudden realization that his decisions had not led to the happiness or success he had envisioned impels him to change course, and he apparently returns home a new person.

The parable invites the question: If we go off to a “far country” and forget who and what we are, what is it that can change our outlook? What can bring us “home” to understand our God-given inheritance, self-worth, and spiritual, sinless nature? As the story of the prodigal indicates, it’s not through human reasoning or argument that we come home—or by following the impulses of the material senses (which is what gets us into trouble in the first place)—but rather through the willingness to be guided by our spiritual sense. As with the Apostle Paul, who came to himself on the road to Damascus, the wonderful moment when we turn back to our heavenly Father comes through Christ, which Mary Baker Eddy defines spiritually as “the true idea voicing good, the divine message from God to men speaking to the human consciousness” (Science and Health with Key to the Scriptures, p. 332). It is the activity of the ever-operative Christ in human consciousness that awakens us to our spiritual nature, which is always at one with God. The prodigal son’s coming to himself symbolizes to me the moment we yield to the divine message and begin to discover our self-worth and inviolable sonship with God.

I came “home” to my true nature and rejoiced.

When I was a college student, I had my own “prodigal”  moment. During one summer recess, I was juggling two janitorial jobs to earn the money I needed to pay for the next year’s tuition, books, and other costs. One job involved working by myself, cleaning offices late into the night and pre-dawn hours; the other began mid-morning at a local department store. Sleep was precious; the work was menial; I had limited contact with friends because of my odd working hours; life was anything but fun. To make matters worse, the owner of the family-run business that had hired me to work the night job was not paying me regularly.

One evening, I was mulling over my life. While I was struggling with discouragement, self-pity, and diminished self-respect, there was also the awareness that this state of thinking was not right. A better way forward was needed. Then, a very clear thought came to me in a sudden burst: No matter what my current or future condition, I could never be anything less than God’s beloved child—His expression. I was valued because God valued me; I was worthy because God made me worthy as His spiritual idea. No matter what my job or career path, that intimate relationship would always stand intact and constitute the only thing that truly mattered in my life. My true work in life was to appreciate my own divine inheritance, my talents, and use them for good, and wherever possible to help others see this for themselves, too. I needed only to “acquaint now thyself with him [God], and be at peace: thereby good shall come unto thee” (Job 22:21).

As a former Sunday School student, and then as a member of the Christian Science organization at my university, I was familiar with these spiritual concepts. But I realized in that instant that I had allowed myself to drift into that “far country” of dissatisfaction, doubt, and despair. Just as swiftly, it was easy for me to recognize where the wake-up call was coming from! The Christ, the divine Truth Jesus represented and proved, was there in that otherwise quiet and lonely office, lifting me from my despair. And I came “home” to my true nature—rejoicing the rest of the night, happily singing away the hours as I went about my tasks.

I was a prodigal only in the sense that I had accepted the erroneous notion that I was a second-class citizen in God’s kingdom. As I became more grateful for the work I was doing and for my status as God’s child, I became less fixated on the perceived lower social status of a janitor. And my yearning to see a way forward had made me receptive to the uplifting Christ message of my divine sonship.

This experience was liberating and gave me confidence. When the company refused to pay my wages for nearly two months of work, I decided to file a legal suit in small claims court. I prayed to know that my faithful work would be rewarded. Just as the Christ had spoken to me, it was speaking to every one of God’s children, including the owner of that company. He, too, would “come to himself” and do what was right. Later in the summer, the case came before a judge, who ruled in my favor but noted that with the owner absent from the court, collecting the payment might not be possible. However, a week later, restitution was complete—I was overjoyed when a check from the owner for the right amount came to me in the mail.

I have had many challenges over the course of my life, but the insights from that one nighttime moment have stayed with me. There have been additional blessings resulting from other Christ-induced wake-up calls. Whether we’ve wandered into that far country consciously or inadvertently, we can rest assured that our heavenly Father, through Christ, is with us 24/7 to bring us back home—and to welcome us with love. 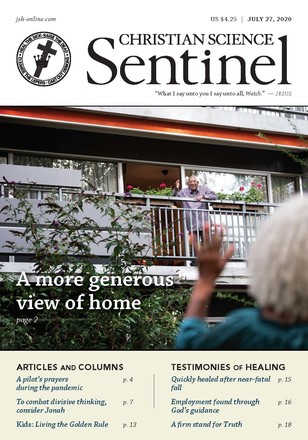