Sam Cooke’s plaintive but hopeful civil rights anthem, “A Change is Gonna Come” is a timeless classic. It was number 12 in Rolling Stone’s December 2004 list of the 500 greatest songs of all time.

I’m sure I’m not alone in wishing it weren’t so timeless a classic. When the song was released during the civil rights era in the United States, it was a bold statement of the social problems faced by Blacks, interlaced with the singer’s heartfelt hope. Why hasn’t that hope been realized almost sixty years later? Why aren’t we joyfully singing, “The change has come and it’s permanent!”

Of course, it’s right to be grateful for the hard-won progress made during and since the civil rights era. But the change Cooke was hoping for clearly hasn’t been fully realized when many obstacles to racial equality remain. Many feel a deep sorrow that such barriers still stand.

Such empathy is a good starting point, but clearly it can’t be the endpoint of our caring for one another. We need to act in ways that make a difference. That includes identifying and consenting to practical steps we need to take—and then taking them. But it also demands that we watch what perception of ourselves and our neighbors we are holding in thought, because there’s more to each of us than is detected on the surface. We each have a God-given identity that is spiritual in nature, made in God’s, Spirit’s, likeness. This divine nature is what Jesus perceived in individuals—and proved true for all—in each of his healings recorded in the Scriptures. Christian Science explains that this spiritual identity isn’t just one aspect of a selfhood that also includes a material form and temporal history, but is actually the whole of what we each truly are as God’s cherished offspring.

When we understand that this is our true existence and recognize that the source of everyone’s spiritual identity is the same perfect Maker, the one Father-Mother God, we see that our coexistence with one another isn’t human equality in the making; it’s a fully formed spiritual equality that was, is, and always will be unshakable. This is how divine Love, God, knows and cherishes all humanity—as a harmonious, spiritual family forever thriving as one universal brotherhood and sisterhood, all equally endowed and loved by God.

It is the very truth of this underlying spiritual equality that urges tangible change in our individual lives, our day-to-day interactions, and national and global mores, because God’s will demands to be expressed “in earth, as it is in heaven,” as Jesus’ Lord’s Prayer says (Matthew 6:10). And one way we can each play a part in forwarding this goal is by being aware of our thoughts and asking ourselves, “What expectations am I consenting to? Am I resigned to the seeming intransigence of entrenched attitudes and convinced that change can’t occur? Or am I accepting that in the light of an understanding of God’s power to change lives, even long-held prejudices can lose their seeming obstinacy?

To consistently give prayerful consent to divine reality is to stand for all humanity’s right to freedom, fulfillment, and equality.

The source of that obstinacy is pinpointed in the Bible as “the carnal mind.” This carnal, or mortal, mind is a supposed opposite to the divine Mind or God, and a seeming influence over us that we really do not want to consent to. When an issue is as charged as racism, it’s easy to get caught up in outwardly or inwardly blaming individuals or groups of people for both the injustice itself and the resistance to correcting it. But while people’s motives and actions do need to change, it’s this mortal mind or material mentality that is the underlying foe of all such progress. It claims to operate in all our thoughts—whether as racism, selfishness, apathy, or a resignation to evil’s appearance of being immovable. But none of these mental outlooks constitute our true nature as the expression of infinite Mind, God, whom Christian Science reveals as All-in-all. The Bible says that “the carnal mind is enmity against God” (Romans 8:7). To the degree that we are consenting to the belief that any of these states of mind are our own or another’s mentality, we are actually consenting to the belief that God, good, the divine Mind, is not All, and that evil has a place in life or reality.

To contribute to genuine progress, then, it’s not enough to simply acknowledge God’s goodness and our spiritual nature as sons and daughters of God, although that’s certainly a good starting point for prayer. We need to consent to the actual truth of these all-embracing spiritual ideas—to become conscious of this, and therefore conscious of the untruth or unreality of opposite mental states and the material conditions they give rise to that have fueled the history of racism and that prop up its perpetuation.

Thousands upon thousands of people in all walks of life have experienced the power of spiritually understanding what is and isn’t true about everyone’s relationship to God. Among these are Blacks who have experienced how this spiritual perception of themselves and others can overturn the aggressive tendencies of mortal mind—from the reformation of bigoted neighbors, to the calming of aggressive police officers in the act of racial profiling, to overcoming employment and housing discrimination.

Inspired by rereading several such accounts recently, I have considered some specific questions about how we can do a better job of consenting to God’s authority:

To consistently give prayerful consent to the divine reality that overrules mortal mind’s claims is to follow in the footsteps of Jesus and stand for all humanity’s right to freedom, fulfillment, and equality. In this way, people of all races and cultures can play a powerful part in helping transform Sam Cooke’s “Change is Gonna Come” from an anthem of hope to a prophecy come true.

Prejudice is not something that happens "over there but not here." We each have a part in the healing of hatred and injustice. Prayer leads us to see the basis for this healing work; it o...

When Mary Baker Eddy announced to the world that man is wholly spiritual, she started a revolution. The world, with its entrenched conviction that life springs from matter, felt the impact of the i...

Can racism be healed?

I prayed on the day George Floyd, a Black man, died at the hands of a white officer while in police custody. My prayer went something like this: “What, Lord? What do I think? What do I do?” Th... 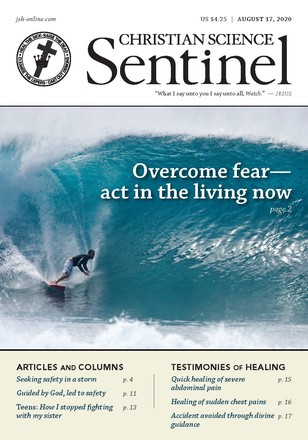 Overcome fear—act in the living now

Seeking safety in a storm

The source of supply that meets our needs

Guided by God, led to safety

How I stopped fighting with my sister

Are we consenting to equality?