Predestination has long been a troubling concept for a number of people of faith. Sixteenth-century reformer John Calvin himself called this grim theological point of Calvinism the “horrible decree.” This belief that only a select few will receive salvation, while vast numbers will be lost without recourse, no matter what one’s efforts are to reform, was indeed discomforting to many and is still held by some today.

In contrast to this concept, one idea that has been deeply healing is the understanding that God is Love, completely good, a biblical teaching that is made clear in Christian Science. Mary Baker Eddy, the Discoverer and Founder of Christian Science, wrote in No and Yes, “What God knows, He also predestinates; and it must be fulfilled” (p. 37). Anything God predestinates for man must be good, because God is Love and God is good.

What does God know about man? Everything! And it’s all good. Genesis, chapter 1, states that God made man (both male and female) in His image and likeness. He gave man dominion and declared that man and His entire creation were very good (see verses 27, 28, 31). This means that God does not create evil or send bad things to His creation to straighten us out. Although evil may appear to be real to the material senses, there is no evil in God’s creation, and there is nothing to straighten out. The inspired Word of the Bible reveals God’s great love and care for man in maintaining man’s likeness to, oneness with, and inseparability from Him.

Evidences of God’s love and care for His creation are prolific throughout both the Old and the New Testaments of the Bible. For example, in the Old Testament, God cared for David, guiding him in his victory over the giant Philistine warrior, Goliath, and continually protected him from enemies, both within and without his kingdom. And in the New Testament, Jesus declared and demonstrated his oneness with God, the Father, as God’s Son, through his life and ministry, “healing every sickness and every disease among the people” (Matthew 9:35) and even raising the dead. Yet, in humility, he gave God the entire credit for his healing work, and he said that those who followed him would also do this healing work. Additionally, the Apostle Paul tells us in Romans that we are foreknown by God: “For whom he did foreknow, he also did predestinate to be conformed to the image of his Son” (8:29). Quite a contrast to any illness or problems we see in the world! These illustrations go to show that an understanding of what God knows results in healings.

What does God know about man? Everything! And it’s all good.

While reflecting on Mrs. Eddy’s statement, “What God knows, He also predestinates; and it must be fulfilled,” a Christian Science practitioner was contacted by a man who requested prayerful treatment for a medically diagnosed glandular problem that was affecting his vision. The diagnosis was that the man would go blind or even die if not treated medically. The man, however, chose to rely on Christian Science for healing.

The practitioner spoke with the patient about how God knew him only as His beloved child, made in His image and likeness. He explained that what God knew about him was his true immortal, incorporeal, spiritual being as the loved child of His care—and that this was his authentic and only real identity. He prayed along these lines, reflecting on seven synonyms for God—Principle, Mind, Soul, Spirit, Life, Truth, and Love—given in the Christian Science textbook, Science and Health with Key to the Scriptures by Mrs. Eddy (see p. 465).

The practitioner reasoned as follows: In the image of God as Life, the patient was predestined to be wholly healthy; in the likeness of God as Truth, he had to be wholly good and pure; in the likeness of God as Principle, every aspect of his being was governed by God’s law, and this law maintained his eternal perfection as God’s image and likeness. He was not governed by material laws, worldly opinions, or diagnoses. Mrs. Eddy states in No and Yes: “Eternal harmony, perpetuity, and perfection, constitute the phenomena of being, governed by the immutable and eternal laws of God; whereas matter and human will, intellect, desire, and fear, are not the creators, controllers, nor destroyers of life or its harmonies” (pp. 10–11).

After Christian Science treatment, there was no trace of the previously diagnosed condition.

As the image of God as Spirit, man is purely spiritual, never under the supposed laws of mortality. Because matter has no intelligence to act and no law behind it, Mrs. Eddy said in The People’s Idea of God, “The only law of sickness or death is a law of mortal belief, an infringement on the merciful and just government of God” (p. 12). In the image of divine Mind, all of his faculties are perfect—in fact, he was and is the embodiment of Mind’s ideas, hence all was and is truly harmonious. Understanding that God is eternal, man has always existed as His divine manifestation.

Four days after this prayerful Christian Science treatment, all vestiges of the problem were gone, and the man returned to his work and regular routines completely healed. When he later returned to his physician for his scheduled appointment, to the doctor’s amazement and joy he could find no trace of the previously diagnosed condition. Many months later, the man continues to have no trace of a glandular condition.

The practitioner glimpsed what it means that “all things were made by him; and without him was not any thing made that was made” (John 1:3). A glandular disorder could never be predestined by an all-loving God, because God never made sickness. Likewise, it is inconceivable that such a malady would be the fulfillment of the love of our benevolent, caring Father-Mother God. “If sin, sickness, and death were understood as nothingness,” stated Mrs. Eddy in Science and Health, “they would disappear. As vapor melts before the sun, so evil would vanish before the reality of good” (p. 480). Whatever problem presents itself, a prayerful understanding of what God predestinates brings healing. 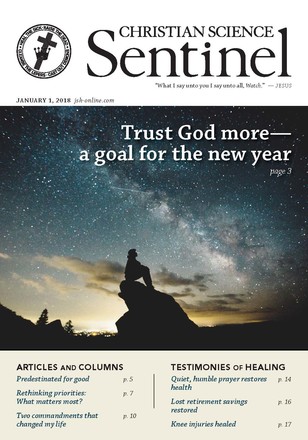 Rethinking priorities: What matters most?

Two commandments that changed my life

I was all better!