Lessons in worth and humility

I had always been proud of the religion ingrained in me from childhood. And yet I was taught to accept my existence as a sinner living in a state of unworthiness. My church friends said that believing this was a good thing; they said it had a lot to do with humility.

Later, after I joined the United States Air Force, that idea was challenged at a time when I was on leave stateside. I decided to check out a Christian Science Society on Wednesday evening. That event defied my set ideas and led to the discovery of true humility as a powerful healing idea.

After the service I went back to see the First Reader and mumbled something about wanting to know more about Christian Science, “… if only I were worthy.” He quickly answered, “You are worthy,” and pressed a copy of Science and Health with Key to the Scriptures by Mary Baker Eddy into my hands. It proved to be better than gold.

I began to understand what I had just witnessed as I read the words of my newly acquired Christian Science textbook on the bus back to the military base. Ideas like the following inspired me: “The divine Principle of healing is proved in the personal experience of any sincere seeker of Truth. Its purpose is good, and its practice is safer and more potent than that of any other sanitary method. The unbiased Christian thought is soonest touched by Truth, and convinced of it” (Science and Health, p. x). Unbiased Christian thought … my inner voice repeated.

Everything changed. I began to study Christian Science and learn about my innate worth as a child of God. I found a Christian Science practitioner, who helped show me how I could join The Mother Church, The First Church of Christ, Scientist, in Boston, Massachusetts. Later, while teaching in a university on the island of Guam, I deeply felt the desire to have Christian Science Primary class instruction, so I applied to a class in Chicago and was accepted. Through consecrated prayer, I was able to overcome limitations related to timing and location. I was in my place when class began.

I grew in the assurance that I could rely on my Father-Mother God for healing in every human situation, but it was not until many years later that my faith was tried, even as my patience was tested. My family experienced an unexpected financial need.

To meet my family’s need, I set about refurbishing a small rental property, with my wife and family working beside me. Soon a couple offered to buy the house. What seemed like an agreeable sale came to a halt when it was discovered there was a “cloud” on the house’s title; the “cloud” was information that might damage the title’s validity. The real estate agent informed me that the previous owner had managed to quietly position himself so that he had control over the street and thereby access to each property on the street. And I could not sell until this “cloud” was removed.

My neighbors and I tried to rectify the situation, but were told we would have to pay a very large sum of money to the former owner to clear the “clouds.”

Amid feelings of dismay and confusion, I remembered how folks in that Christian Science Society I’d visited years ago had testified about their immediate access to the Christ. I prayed, and a quiet sense of order returned to my thinking. When I explained the situation to a practitioner, he gently mentioned that it’s not useful to outline exactly how God was operating in our lives.

Suddenly I realized, Had I been subtly hanging on to an old theological view of humility—the idea that I was a sinner and that suffering was something God allowed to help bring me closer to Him? This wasn’t what I’d learned from Christian Science.

I went to the Bible and Mrs. Eddy’s writings and found a gem in Miscellaneous Writings 1883–1896: “Humility is lens and prism to the understanding of Mind-healing; it must be had to understand our textbook; it is indispensable to personal growth, and points out the chart of its divine Principle and rule of practice” (p. 356).

The home sale fell through, but I refused to be upset. It was now clear to me that divine Mind would reveal great good. Something else came to my attention that needed to be met with prayer. It was my opinion that a certain individual was a terrible person, and I knew that mind-set had to change.

I turned to God asking that He protect me from all evil whatsoever, anything that would obscure or hide the brightness of God’s love. A moment of clear understanding showed me that if I followed Christ I must love my enemies, and if I truly did that it would be impossible for an “enemy” to hurt me in any way. Even though time was passing, things began to shift.

A very deserving family came to me and offered to buy my property. They could afford the exact amount that the former buyers had offered and were willing to wait for the “cloud” to be removed from the title.

What happened next was a spontaneous coming together of most of the neighbors on my street. In unity they filed documents with the county clerk that enabled all the properties on that street to be free from “clouds.” I then was able to meet with the potential buyers, and we signed the deed to the house as tears of gratitude were shared by buyers and sellers alike.

The spiritual qualities of true worth and humility, as demonstrated by Christ Jesus, set the standard for all to follow. 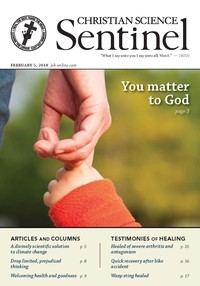