Learning to lean on God

Useless. That’s the way I felt. I pride myself on being a fairly independent person, and here I was on a two-week canoeing and rafting trip with other young Christian Scientists in Maine, hardly able to walk.

I’d been loading canoes onto a trailer when I fell and twisted my ankle. Everyone was quick to assure me that I was completely safe in God, and I was so grateful for the immediate support of my classmates and the leaders of the trip. I knew everyone was praying, and I felt confident that I would quickly be OK.

That evening, I spent some time by myself praying, then decided to join the group. But deep down, I knew that rather than fully addressing the problem, I was kind of just telling myself that I wasn’t going to let my ankle get in the way of having a good time. Even though I tried to act as I normally would, my ankle was really bothering me and I didn’t feel I could fully participate.

That’s when the feeling of uselessness set in. As I went to bed, it seemed as though I wasn’t able to do anything without someone else’s help. Even worse, I suddenly felt like I wasn’t pulling my weight or contributing enough to our group. The idea that I was dead weight—someone that other people had to keep afloat—frustrated me to no end.

The next morning we got up and loaded our stuff. I still wasn’t moving totally freely, so I was a little nervous when I found out that the plan for the day was to hike up a mountain. I love being outside and in the mountains; however, even though I told the leaders of the trip that I was fine with the hike, I wasn’t exactly sure how I would manage.

I had been praying with the idea that I couldn’t be swayed by anything the five physical senses were telling me. Only God, as divine Truth, could give me the true idea of myself—as whole and unhurt. And since Truth could never be swayed, neither could I. So, I gave my backpack to one of the trip leaders, and we began hiking.

I walked at the back of the group, and a couple of my friends stayed with me, chatting like we normally do, just not going at the same pace as usual. I was clinging to the spiritual fact that I could never be separated from God, and this strengthened me during the first part of the hike.

After a short break, we hit a much more difficult section of the trail. Not only was it much steeper, but there were also lots of fallen trees and other debris. My ankle was bothering me a little at this point, but mentally I felt I was making progress in trusting God, and I was also grateful that I was still keeping up with the group.

Soon it became too foggy to continue all the way to the top, so we decided to turn around. The trail was too narrow to rearrange the order we were hiking in, so I was now at the front of the group. Looking back on this experience, I know the healing had really begun to solidify at this point because it didn’t even occur to me that I wouldn’t be able to handle leading the group. I just turned around and started walking. I also began replacing the lingering suggestions of pain, or the temptation to say “ow,” with the spiritual fact that matter has no sensation. Every time I stepped down, I replaced the thought of pain with the truth of my painless, spiritual substance as the reflection of God. By doing this consistently, I found that the thoughts of helplessness and uselessness began to fade until they eventually stopped coming.

After a break for a snack, we began the final portion of our descent. I was at the front again—not because we couldn’t rearrange our hiking order, but because now I was perfectly able to keep the pace. My ankle was no longer painful, and by the next night I couldn’t even remember which one I’d hurt. I was completely healed.

Of all the ways I grew through this experience, the biggest would be overcoming the sense of helplessness and the mistaken belief that I can do anything on the basis of my own ability. I realized that God is the true source of our ability, and when we lean on Him, we can accomplish what seems like the impossible.

LISA ANDREWS—STAFF
Send a comment to the editors
NEXT IN THIS ISSUE
TeenConnect: Your Healings
Safe at first base 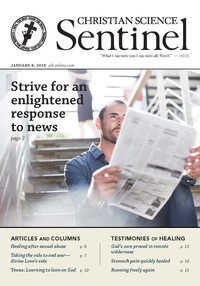