She did. He did. They did. I did. And you can—even if you may think you don't want to. And why not! Saying yes to living doesn't mean agreeing to grin and bear it regardless of what the situation may be. Whether you're suffering from a disease, or from mental pain brought on by disappointment or grief, or facing the bleakness of old age, you can discover the fact that good things can start happening right at this moment.

Never give up! Freedom, joy, purpose—they haven't slipped out of your grasp. And you don't need to feel that you're either unworthy of happiness or that you've tried so many times to find purpose and peace without results.

Jesus offered a promise to each one of us, a promise that has been fulfilled in the lives of countless people: "I am come that they might have life, and that they might have it more abundantly" (John 10:10). This was a promise that he made credible— whether by feeding a crowd, finding the money to pay taxes, or healing people of all ages. However, too often our troubles of the moment seem overwhelming. The original publisher of this magazine, Mary Baker Eddy, compassionately realised this when she wrote, "Nothing is more disheartening than to believe that there is a power opposite to God, or good, and that God endows this opposing power with strength to be used against Himself, against Life, health, harmony" (Science and Health with Key to the Scriptures, p. 380.)

Never give up! Freedom, joy, purpose—they haven't slipped out of your grasp.

We have life "more abundantly" as we realize something—life is not merely existence. Life is God.

This is the message of the Bible. It's a message that has sustained humanity through the ages.

Let me tell you about several people who have discovered, in the middle of hopelessness, a total turnaround in their lives—because of this very message. In our times, each of these people has proved the words of St. James, "Shew me thy faith without thy works, and I will shew thee my faith by my works" (James 2:18).

The first individual taught me that you can choose life, and that this not only gives you the joy of freedom but goes far beyond your experience by helping others. The actions of this woman were to bless me for many years.

At the time, I was a student at the University of Chicago. I was living in the home of a woman who was a Christian healer—a Christian Science practitioner. It was a small four-room apartment.

One day when I returned from my classes, she asked if I'd be willing to sleep on a couch in the dining room. She was praying for a very elderly woman who had a debilitating disease. And she needed practical care. The practitioner had invited her into her home until the patient's daughter could come to care for her mother.

"Please let me die, my life is over," I would hear the woman crying out over and over.

As a young person, I just accepted that here was a very old woman who was going to die.

When the daughter arrived, there was great tension. The daughter wanted her mother to go to a hospital, but the mother didn't want this.

In this atmosphere of skepticism, antagonism, and resignation to death, that Christian Science practitioner remained calm, even confident. She had spent many years healing others through prayer alone. She knew the promise of our right to "have life, ... and [to] have it more abundantly" was from God, from Life itself. She must have felt it would be fulfilled.

This situation went on for about eight days, when I realized the patient was no longer pleading to die. Soon she was sitting up. Then walking and expressing radiant joy. Within two weeks she was completely healed.

The daughter, by then filled with awe and gratitude, was ready to invite her mother to make her home with her. Me? I was impressed! Not only was the woman healed, but her daughter was a different person—tender and patient.

But that was only the beginning.

Within two years, while I was still working on my degree, that elderly-about-to-give-up woman stopped for a visit with my landlord the practitioner. She was on a cross-country trip. And she'd become a Christian healer herself. Her prayers had healed many people. When we recalled with her the freedom she had gained from illness and hopelessness, her face lighted up.

"And to think I thought my life was over! I hadn't even begun to live!" she exclaimed.

This was like a new birth for that woman. And even that was not the end of the influence it had on me. Thirty years later, when I was in the town where she had lived, I went to a church she had helped to start. In speaking with a member of that church, I asked if she had known this Christian Science practitioner.

"Did I know her?" she said. "Let me tell you how her prayers healed my husband of paralysis from a stroke in one afternoon ... and how our son was healed overnight when he pulled a pan of boiling water off the stove and was badly burned." She had many instances of healing to tell. She also told me that lady had continued to be an active healer there for 15 years.

She had emphatically said yes to living.

That brief encounter showed me what it means to have life more abundantly.

And her example was there for me still another 20 years later when I was faced with a similar situation. Her experience was one of the factors that enabled me to refuse to give up praying for my own healing of a long bout with a crippling, painful condition and to enter a decade of the busiest activity I'd ever known.

My brief encounter with that woman showed me what it means to have life more abundantly. I saw firsthand that Jesus' promise of comfort, satisfaction, and peace is just as valid today, as it was when he addressed his contemporaries 2,000 years ago. I saw something illustrated in her healing: life isn't merely a futile existence or something governed by chance. Actually Life is God. Life is our source. Our creator. Our Parent. Because He made us, we have an entirely good heritage.

The other individuals I mentioned at the beginning of this article had their rewards as well. A man I knew felt devastated by a breach of trust. He felt that running away from life was the only solution to this situation of utter despair.

As he began to realize that it was impossible for him to be separated from God, who is the source of all good, he became willing to accept alternatives to the conclusion that he had lost something irreplaceable. Instead he accepted the fact that, although his experience involved shock, he learned that loss can be gain. Why? Because it would bring evidence that good was real. Powerful. Always present because God is always present. He didn't have to escape from a disappointing fact; he had to say yes to living. He did, and for everyone involved there was great gain.

I also knew a family very well that had been abandoned. The father had left them after his business failed. The wife refused to let self-pity or hurt or condemnation deprive her of the trust she had in God to provide for every need—abundantly.

During the next ten years, she started with a menial position, progressed to a higher level, and soon had her own business in a field previously closed to women. Her children during that time were able to go to college. Their mother's spiritual understanding helped them see that the circumstances of the past could not deprive them of good in the present. There had never been a condition that stopped good from coming to them from God.

At the end of ten years, the husband returned home. There was no need for a reconciliation, as during that period the wife saw that the family ties remained close. That family said yes to living. And today there are three generations in that family who can attest to finding the blessings we all are entitled to have because God never stops giving them. 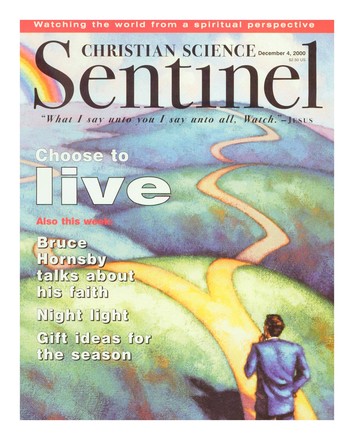 TRYING TO REACH US?

A quest for freedom of expression

Using the Web—without being used by it

Giving YOU for Christmas