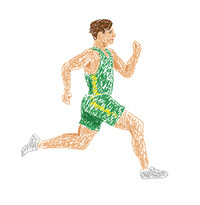 My favorite sport is track. That’s why when I made it to the state competition for track as a freshman, I felt very accomplished.

But then something terrible happened. The week before state, my coach warned me that I should be really careful, so that I wouldn’t get hurt before the big race. And that same week, I managed to hurt my ankle pretty badly when I was practicing football for fun.

There I was on crutches, stressed out, knowing that in a few days I was supposed to be performing my best. At track practice, I saw the disappointment on my coach’s face when I told him what had happened.

I decided I would only identify myself correctly—the way God made me, as His spiritual reflection.

Fast forward to the day of state. Even walking to breakfast, I couldn’t help but limp because of the pain. But that day, instead of worrying, I tried something else—something I should have done in the first place. I prayed for myself the way I’d learned to in the Christian Science Sunday School.

I realized there were two ways I could look at things. One way was in line with what the five physical senses were telling me: that I was a runner who was damaged. That’s how I’d been seeing myself for the last several days, and it really hadn’t helped anything.

Then I thought about the other way I could see the situation: by beginning with God. God is Spirit. So I realized that instead of seeing myself as a runner with a physical body that might or might not perform well, I could see myself as Spirit’s image and likeness—spiritual and free. Prayer helped change my mind-set to recognize the real runner that I am: God’s expression. And my focus shifted from being worried to trusting God more and more.

I decided I would only identify myself correctly—the way God made me, as His spiritual reflection. I would not identify myself as someone with a hurt ankle. That day I knew that all the power and strength I need as an athlete comes from God. God creates and maintains my identity and always will. I stuck with that idea all day. I thought of it an hour before my race. Ten minutes before. Five minutes, four, three, two, one.

And then I was standing on the track, watching my fellow relay team member coming up fast behind me. As he handed me the baton, I knew what I truly was and why I was free to perform. I felt no pain at all while I was running, and that day our relay team ended up setting a new personal record. In fact, because we were faster than we’d ever been before, we moved on to the next round, and I was able to run painlessly in that race, too.

Of course it was exciting to perform well, individually and as a team. But I walked away with more than just a team record to be grateful for. This experience also taught me that seeing things from God’s perspective is the quickest way to get “on track” for healing. 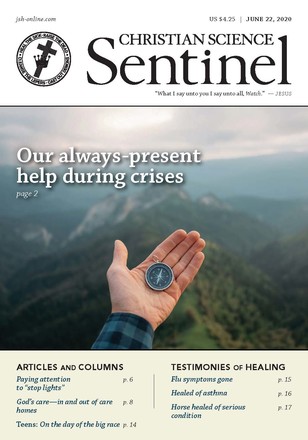 Our always-present help during crises

God’s care—in and out of care homes

Listening to what we most need to hear about our health

When a neighbor mentioned Christian Science

On the day of the big race

Healed of asthma and blessed by Sunday School

A message from The Christian Science Publishing Society

Praying for ourselves and the world