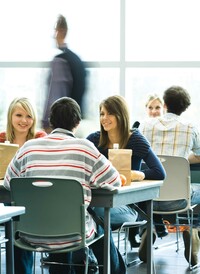 Four years ago my family and I decided to enroll me in our local middle school. This meant that I’d have to leave the private girls’ school I had attended since pre-school. I was going into sixth grade and it was hard to leave my school and friends. I went from a class of 50 girls to a co-ed class of 300. I had worn a uniform my whole life and in my new school I could wear whatever I wanted. The new school came as a shock to me at first, but as the days went by, I was adjusting more and more to a whole new environment.

Before long I became especially close with two girls in my class. But as I became greater friends with them, I started drifting farther away from the person who I held myself to be as a Christian Scientist. I became infatuated with my social life. I gave less effort to my grades, my relationship with my family, and most important, my relationship with God. I had gone to Sunday School and attended camps for Christian Scientists my entire life and my parents were very devoted to the Cause of Christian Science. I’d had many healings, but felt like I had never really comprehended what God truly was and what He did for me every single day. Christian Science and God seemed less important to me as I became more and more preoccupied with social status, beauty—basically being popular.

At the end of sixth grade it all started to fall apart. One of my best friends began bullying another friend. She would cyberbully by posting mean messages about this girl online, and even physically hit her sometimes. I became filled with fear that she would turn on me as well, so I didn’t do or say anything. I didn’t turn to Christian Science and pray about this problem when it faced me. I also didn’t tell my parents or any adults at my school . . . yet.

Seventh grade started and I was in a constant state of fear at school. My friend who had bullied the year before started turning on me. Then all of the sudden, all the girls in our social group started turning against me. I started receiving texts and e-mails calling me names. At school, things were worse as the girls laughed at and ridiculed me. As these instances got worse all I wanted to do was avoid them as much as possible. I began eating lunch in the guidance counselor’s office, arriving late to school whenever I could, and taking indirect routes to my classes. This went on for a while, and I kept my feelings hidden until my parents found out about the situation. I was depressed and my grades were suffering. I was mesmerized by the circumstances and didn’t look to God for His care.

When my parents found out about the bullying, they immediately started praying, working metaphysically to know the truth about me. They shared this passage from Science and Health with me: “In Science man is the offspring of Spirit. The beautiful, good, and pure constitute his ancestry. His origin is not, like that of mortals, in brute instinct, nor does he pass through material conditions prior to reaching intelligence. Spirit is his primitive and ultimate source of being; God is his Father, and Life is the law of his being” (p. 63). My parents were not just praying for me in this situation, but also, in a general way, they considered everyone involved—the parents, the girls, and the school administration. At one point, the guidance counselor did organize a meeting with all the girls involved. This discussion put a stop to the bullying for a while.

At home, my parents and I looked up words like dominion, trust, and safety in Mary Baker Eddy's writings and the Bible.

But one day, things got seriously out of hand when I went to lunch in the cafeteria. Several girls came up to me and one hit me across the face. The next day I realized a group of them were following me in the hallway until I split into a run and went to the guidance counselor’s office instead of going to my next class. I was consumed by fear, and it felt at the time like God was unreachable. (I hid the fact that I’d been hit from the guidance counselor, because my reasoning went like this: If I tell, the girl will get kicked out, since this is her “third strike” for bad behavior.)

At this point, I became so grateful I had Christian Science to turn to. At home, my parents and I looked up words like dominion, trust, and safety in Mary Baker Eddy’s writings and the Bible. We turned to verses like Psalms 8:6 that says: “Thou madest him to have dominion over the works of thy hands; thou hast put all things under his feet.”

I saw that I needed to trust in God no matter what kind of trouble surrounded me. I also saw that there were spiritual lessons for me to learn through this experience, and I could trust God to guide me and love me while I was learning. The lessons were mainly that I could bring light to the situation. It wasn’t just about me, and I really took the opportunity to see that we could all learn from this. There could be healing. I really wanted to gain my dominion over fear.

The time came when I had the courage to stand up to the girls and told them that I wanted to be left alone. I told them I’d rather hang out with the kids in our classes we all used to make fun of than be a part of their group anymore. They were shocked. After this, they stopped following me in the hallways, calling me names, and staring me down. I basically had one friend left, someone who wasn’t involved in all the drama and liked me for who I was.

From this point on, the year started getting better. I focused on the things that were important to me like my grades, my family, being a better person, and most important, my relationship with God. I had a feeling, though, that this particular school was not right for me. My parents and I started opening our thoughts to different options and trusting that God was always unfolding a good plan for each one of us.

The school year ended and an opportunity opened up for me to attend The Principia, a school for Christian Scientists. This was an option that I never thought would be possible because I’d have to go to school out of state. But my family saw this development as the right answer for me, and a clear example of God’s power to help and guide every event of our lives. After I moved schools, a lot of those girls messaged me telling me that they were sorry. Even the one girl who acted the meanest of all eventually apologized. Every once in a while I’ll talk with some of these girls online. But I’ve moved on.

I learned a powerful life-lesson through this experience. Mrs. Eddy wrote something in Science and Health that helped me stay strong in the face of that bad, or “sinful” behavior, “To fear sin is to misunderstand the power of Love and the divine Science of being in man’s relation to God,—to doubt His government and distrust His omnipotent care” (p. 231). I know now that I can trust God’s omnipotent care, every single day. 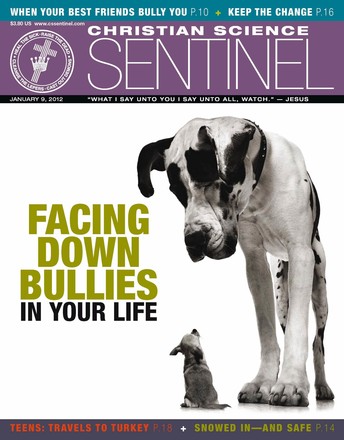 A pledge for healing answers

A spiritual defense against bullying

When your best friends bully you

How a seagull taught me to 'see more'

Snowed in – and safe

My summer travels to Turkey

The foundation of Church

A healing light in my life

Take a stand with moral courage

Life is living you

Safety from threats large and small