A Statement by the Directors

Because of aggressive propaganda, apparently circulated to discredit Mrs. Eddy and to induce belief that she abandoned her own teaching, "Only through radical reliance on Truth can scientific healing power be realized" (Science and Health with Key to the Scriptures, p. 167), we deem it timely to make the following statement.

As we are informed, Mrs. Eddy did not, at any time after 1866, believe in the use of any drug as a curative agent in connection with the practice of Christian Science. Nor did she, at any time after she became a Christian Scientist, either use a drug or allow one to be used for her, except as she employed, in a few instances, an anæsthetic for the purpose of temporary relief from extreme pain.

That she acted consistently with her teaching is shown by her statement about dentistry and surgery in the Christian Science Sentinel for December 6, 1900, and in The Christian Science Journal for January, 1901, and the paragraph in our textbook on the use of an anæsthetic (Science and Health, p. 464). As in a degree pertinent, it is to be remembered that the Master himself momentarily felt a sense of separation from his divine source, for he cried out, "My God, my God, why hast thou forsaken me?" but he never abandoned his fidelity to divine Principle. Neither did Mrs. Eddy. 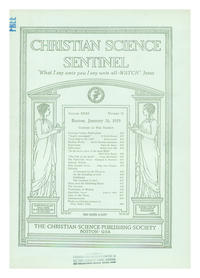