I sat across from two of my favorite teachers, and I was certain they had chosen the wrong side—against me! I was being called out for refusing to go along with their viewpoint. And unless I changed mine, they would not allow me to go on an upcoming school-sponsored camping trip.

This happened years ago, following an incident when a group of several girls unprovoked—apparently solely motivated by vulgar, race-based hatred and encouraged by bystanders—had pushed and grabbed me and three other girls while we were on a stairway landing at the middle school I attended. As this transpired, I was able to break free from my attackers and put myself in front of two of the other intended victims in my attempt to protect them. The attackers then focused on me. They grabbed my legs and lifted me, as if to throw me over the stair railing, but they were stopped by teachers who came to intervene.

Surely I was on the right side! Hadn’t I protected the innocent? And the girls who didn’t get to execute their plan were protected from committing a dastardly act! I asked the teachers, “Why am I being singled out for doing the right thing?”

The teachers explained that while it was good that I had protected the girls, they said they heard me reply to the perpetrators’ promises of future trouble that if they attacked the other girls or me again, I’d fight back to protect us. I hadn’t been in a physical fight before, but I was willing to do that if it was necessary for our protection.

The teachers maintained that the way I could help prevent fights was to refuse to fight. To me, that sounded really convoluted. I felt that under the pretense of making peace, the teachers were ignoring the wrong and weren’t allowing everything that could be done to protect the innocent. However, I finally agreed I would go about my school days and the camping trip without expecting there’d be a fight. Most important, within myself, I set about to do that by praying and trying to follow the laws of God that I was learning about in the Christian Science Sunday School I attended.

The first commandment of the two great commandments Christ Jesus mentions indicates we are to put God first—both in our aims and affections. And Jesus said the second commandment is to love our neighbor as ourselves (see Matthew 22:35–40). He said that it’s easy to love those who love us, but we are to love our enemies, be merciful, and do good even in unfair situations (see Luke 6:32–36). Our desire to do that and doing it, are our means of availing ourselves of God’s power to help and heal as Jesus did.

I did go camping and wound up having so much fun! Initially a few of the girls from the group started taunting calls outside the window of the cabin where I and others were. I ignored their words and treated the girls as if they had come by for a friendly visit and invited them into the cabin. The tone turned positive, even friendly, and there weren’t any more taunts. In one planned activity, I was paired with one of the group’s leaders, and we both enjoyed it! We didn’t become close friends, but we were congenial and laughed together. There were no attacks or fights at camp, and I was not involved in any more race-related incidents for the remaining two years I attended that school.

Christ Jesus said that it’s easy to love those who love us, but we are to love our enemies.

While the stakes of conflicts between tribes or nations may be much larger, this experience provided foundational lessons for me about peacekeeping and ending war—specifically, how it’s important to think on the right side, which Jesus described this way: “I can of mine own self do nothing: as I hear, I judge: and my judgment is just; because I seek not mine own will, but the will of the Father which hath sent me” (John 5:30). And Jesus proved this to be the position of real power by healing the sick, saving many from the depths of wrongdoing, and raising the dead.

So why is healing and saving power found only in following divine will?

Because all war—whether political, religious, or economic—is the result of the belief that there are many minds with selfish, conflicting opinions. The remedy to prevent or stop war, then, is in holding to and demonstrating the reality that there is one all-acting Mind, God, who is divine Love itself, and who is the actual creator of each of us. Divine will is never contentious or divisive because divine Mind produces that which is harmonious, just, and righteous—without selfishness, egotism, greed, or deceit.

Thought imbued with these spiritual truths reflects the only power to heal, and demonstrates the power of divine Love in our lives. By opening our thought to God, we more easily set aside a mere personal sense of “the way things ought to be,” to yield to divine will. Thus fear is silenced; fear and everything that is unlike good, is rejected.

In order to follow Jesus’ example, one lesson is to look at things from a spiritual perspective by doing as the Apostle Paul counseled: “Let this mind be in you, which was also in Christ Jesus” (Philippians 2:5). Christian Science explains this as recognizing one divine Mind, God, as the source of the entire universe, including each of us made in the very image and likeness of God. As we accept that God, divine Love, is omnipotent, we begin to see that there are no opposing sides in divine Love; the allness of Love is its oneness. Genuine peace has its source in God, and divine Love silences the human instinct to fight, which is based on animosity, personal attachment, pride, or vengeance.

So it is that peacemaking is not based on personal opinions or political ideologies, which are inherently divisive. And if we would be peacemakers, we can’t approach conflict resolution from the dualistic basis that someone has to be right, and someone else has to be wrong. The unerring order of divine wisdom reveals that all are actually the spiritual reflection of one divine Mind, and therefore, in reality, there can be no discordant or warring minds. Then the way forward away from any conflict is to see that truth lies in the fact that man is inseparable from Spirit and is inherently governed by Spirit as its reflection. With this recognition, it is incumbent on each one of us to choose to let divine Mind govern our motives, thoughts, and daily acts.

Love silences the human instinct to fight, which is based on animosity, personal attachment, pride, or vengeance.

The Discoverer of the universal laws of God that underlie Jesus’ words and works, Mary Baker Eddy, explained: “The First Commandment in the Hebrew Decalogue—‘Thou shalt have no other gods before me’—obeyed, is sufficient to still all strife. God is the divine Mind. Hence the sequence: Had all peoples one Mind, peace would reign” (The First Church of Christ, Scientist, and Miscellany, p. 279).

Putting thought on the side of God, the supremacy of Spirit, reveals that power is not in aggression. Of course, peacemaking does not ignore or excuse wrong. It’s imperative for those who commit or perpetuate wrong to stop, change their ways in order to do good, and make reparations for wrongdoing. To cover over wrong does not destroy it and tends to be a barrier to peace until the wrong is uncovered, forsaken, and corrected.

Meekness is central to peacemaking, but not merely acts of deference by one person to another. Jesus exercised meekness in his submission to divine will—to only that which is divinely good and holy and blesses everyone. By fixing his gaze on God, strife couldn’t obscure his vision of God and the supremacy of good over all.

Peacemaking is not pacifism. The change that took place in my experience started with letting go of my personal attempts to right wrongs or settle disputes as I defined justice. Instead, I had to see that peace was the natural result of genuinely desiring to honor one God as universally good, and letting my actions reflect divine Love in accordance with His law.

All who take the right side in thought—God’s side—against self-will, injustice, division, and oppression by yielding to the divine will, the supremacy of Spirit, become part of the standing army for peacemaking and ending war. 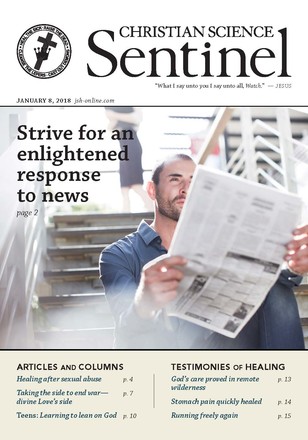 Strive for an enlightened response to news

Taking the side to end war—divine Love’s side

Learning to lean on God

Safe at first base

Why #MeToo spread around the world

By The Monitor’s Editorial Board | January 2018

MeToo and the potential for healing

Our true origin and preexistence with God