Last February, I spent quite a bit of time praying about my “right place” and spiritual identity. One evening, while I wrestled with the question of what was my will and what was God’s will, I experienced exhaustion like I’d never felt before. There have been times in the past when I have been so tired I couldn’t function (usually because of taking on too many commitments at once), but this was different: All my energy just drained from me, to the point that I was worried I was going to pass on. All I wanted was to lie down.

I stuck with prayer, though, and was extremely grateful for the loving support of a Christian Science practitioner during the evening. She prayed diligently with me to see that I couldn’t be separate from God. Angel messages broke through the fear, and I went to bed that night feeling uplifted and peaceful. The sense of exhaustion lifted completely over the next few days as I continued praying.

I was scheduled to make a trip out to Colorado several days later to help out with a special winter Bible study being held at a camp for Christian Scientists. But I was still dealing with fear associated with the exhaustion, as well as severe cold symptoms I’d been struggling with for more than a week prior. Nevertheless, I felt my motives were pure in wanting to help out with this event, and that because of this, I could expect a quick and complete healing.

When I arrived in Colorado, I was grateful to be able to spend a couple of days praying with the practitioner before I had to be anywhere. We prayed together to overcome fear and specifically address any belief that I could be separate from God. I cherished a passage in Science and Health with Key to the Scriptures where Mary Baker Eddy says, “Anatomy, when conceived of spiritually, is mental self-knowledge, and consists in the dissection of thoughts to discover their quality, quantity, and origin. Are thoughts divine or human? That is the important question. This branch of study is indispensable to the excision of error. . . . It unfolds the hallowed influences of unselfishness, philanthropy, spiritual love. It urges the government of the body both in health and in sickness. The Christian Scientist, through understanding mental anatomy, discerns and deals with the real cause of disease” (p. 462–463).

The idea of “mental anatomy” was tremendously helpful as I spent much of that week examining my own thinking. I knew that it was God, Truth, that was doing the uncovering and getting rid of error. It became evident that these physical challenges stemmed from thinking that I could operate independently from God. I also enjoyed reading three articles from Miscellaneous Writings 1883–1896 by Mrs. Eddy: “Pond and Purpose” (pp. 203–207), “The Way” (pp. 355–359), and “The New Birth” (pp. 15–20)—all very much relating to the transformation that was taking place in my thinking.

The practitioner and I also prayed a lot with the definition of Gethsemane from Science and Health: “Patient woe; the human yielding to the divine; love meeting no response, but still remaining love” (p. 586). I felt like my whole winter had been filled with “patient woe”—including some relationship challenges—but all of a sudden I realized that “yielding” to the divine meant surrendering the belief that I could have a will separate from God’s. This did not require giving up everything that I loved in order to “do God’s will.” It just meant giving up the misconception that I could somehow operate independently from Him.

I was already seeing progress by the start of the Bible study. During that week, as I understood that I was one with God and couldn’t possibly possess a mind separate from Mind, the cold symptoms—which had seemed so tenacious over the past several weeks—simply evaporated.

The capstone to this healing came a month or so later, when I saw a thunderstorm in the distance while driving back from a spring trip. The lightning was silhouetted against the clouds, and my immediate reaction was to think: “Wow! What a beautiful storm.” I smiled as I realized what that statement implied: that my perfection, as a child of God, remained entirely untouched despite the aggressive nature of any “storm” of fear or illness. I am so grateful for the healing power of Christian Science, as well as the loving support of Christian Science practitioners. 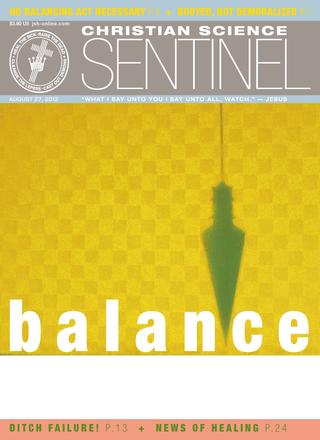 Break through to balance

Something to crow about

In the presence of angels

My thumb was healed

Healing and my absolute favorite sport

Overcrowded prisons and the Almighty's assurance

Reading Room on the radio

Flu healed on the March