When America's new poet laureate, Stanley Kunitz, wakes up in the morning, he doesn't think first about his beloved garden in Provincetown. Or about his ninety-five-year perspective on the twentieth century. No, he thinks first about being a poet. "I don't wake up as a nonagenarian," he says. "I wake up as a poet. I think that's a big difference." Mark Feeney, "The poet's progress: rejection to laureate," The Boston Globe, August 27, 2000, p. 1 .

And what does being a poet mean to Stanley Kunitz? It means, as he explains in his poem "The Layers," holding to the "principle of being." Bill Moyers, Fooling with Words (New York: William Morrow and Company, Inc., 1999), p.13 . For Kunitz, poetry is "a form of spiritual testimony"; each poem is "a blessing." Stanley Kunitz, Passing Through (New York: W. W. Norton & Company, 1995), p. 12 . And the poet is someone who's ready "to convert the daily-ness of the life into something greater than that little life itself." Feeney, p. A30 .

Well, if being a poet has to do with "principle," "blessing," and transforming daily life into something better than the humdrum—even investing it with a touch of the sacred—then maybe we're all poets deep down. Maybe we all wake up as poets in the morning.

We don't all compose verse, of course. But we are all connected to the divine Principle of life, the great Mind of the universe that all creativity comes from. Every good idea for a poem, novel, movie script, speech—or even an "I love you" note on the refrigerator—comes from this Mind, which many people call God. And the more intimately you and I stay in touch with this Mind, the more vibrancy, beauty, soulfulness, and originality we bring to life. The more we hallow everything we say and do.

It's our heritage, as God's children, to express our Father-Mother this way. And nothing can ever disinherit us. Not age or disease or disability or lack of education. Because the faculty of expression isn't ours. It's God's. He gives it to us. As Mary Baker Eddy says: "Mind is not necessarily dependent upon educational processes. It possesses of itself all beauty and poetry, and the power of expressing them"(Science and Health with Key to the Scriptures, p. 89).

So Mind not only gives us "beauty and poetry." Mind also gives us "the power of expressing them." Leonard showed me that years ago. He was in a business communications class I taught. He'd left this course to the very last semester before graduation for one reason: it required each student to give a ten-minute speech at the end of the term. And Leonard had struggled all his life with relentless stuttering.

When Leonard told me how terrified he was, I offered him the possibility of giving the speech in the privacy of my office. initially, he was relieved. But then he started to think he was taking the easy way out. "If I don't face up to this thing now, I never will," he said.

So Leonard wrote his speech weeks ahead of time—and practiced it constantly. Often he got really discouraged, though. One day I told him he was connected to a divine "Communicator," who would never fail him. He liked that.

On the last day of class, I didn't know whether Leonard would give his speech or not. Finally, though, he stood up and began. The first few sentences were agonizing. Then ... something bigger than all of us took over. Leonard smiled. And, all of a sudden, his speech took off. He delivered it flawlessly. Passionately. And with ultimate poetry.

When he finished, the class gave him an ovation. "That guy's got guts!" one of the football players said.

But it was more than that. The poet in Leonard had come out. There was no holding it back any longer. 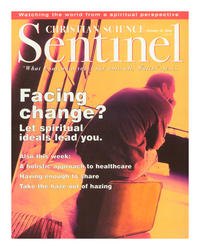