It is a great privilege to see a life change for the better. I saw this happen many times during a seven-year period when I was a volunteer at a youth correctional facility as a Christian Science chaplain. With the help of my husband and another Christian Science practitioner, this ministry grew to over fifty students who met regularly to study the Bible along with Science and Health with Key to the Scriptures by Mary Baker Eddy. Before I share an example of how these teachings make a difference, let’s explore a little about them.

There are many accounts in the Bible of people who experienced life-changing spiritual regeneration. The most dramatic turnaround in the Scriptures is probably that of the Apostle Paul.

The book of Acts tells us his given name was Saul, and describes him as a passionate persecutor of Christians. But on his way to Damascus to wreak more havoc, Saul was struck blind by a light from heaven. He heard the voice of Christ Jesus and realized that he had been mistaken in persecuting Christians. Filled with a new humility, he was transformed from a self-righteous religious zealot, subsequently took the name of Paul, and became a devoted servant of Christ and builder of the Christian church (see 9:1–20).

The character reformation that Paul and so many others have undergone because of the healing influence of the Christ is aptly summed up in the following way: “Put off all these; anger, wrath, malice, blasphemy, filthy communication out of your mouth. Lie not one to another, seeing that ye have put off the old man with his deeds; and have put on the new man, which is renewed in knowledge after the image of him that created him:… Put on therefore, as the elect of God, holy and beloved, bowels of mercies, kindness, humbleness of mind, meekness, longsuffering; forbearing one another, and forgiving one another” (Colossians 3:8–10, 12, 13).

These qualities of “the new man” better express our true nature as revealed in the first chapter of the Bible, which says that each of us has already been created by God in His image (see Genesis 1:27). We awaken to this true identity as we grasp the fact that God, divine Love, is the only creator, and that man is God’s perfect, spiritual reflection, expressing only good.

Further explaining this identity of all God’s children, Science and Health says: “The real man cannot depart from holiness, nor can God, by whom man is evolved, engender the capacity or freedom to sin. A mortal sinner is not God’s man. Mortals are the counterfeits of immortals. They are the children of the wicked one, or the one evil, which declares that man begins in dust or as a material embryo” (pp. 475–476).

Many of the inmates said that for the first time, they felt worthy of God’s love.

Reformation begins with discerning where our thought lies. Is it with good or with evil? Is it with the divine Mind, God, or with the carnal, or mortal, mind? We must then learn to rise above the false, material sense of man and its suggestions of lack, limitation, separation from God, and attraction to evil. This happens as we open our heart and mind to the Christ, “the true idea voicing good, the divine message from God to men speaking to the human consciousness” (Science and Health, p. 332).

Paul’s awakening from material misconceptions allowed him to follow Christ and preach Christianity wherever he went. From his own experience he could say with authority, “Sin shall not have dominion over you: for ye are not under the law, but under grace” (Romans 6:14).

So, getting the right sense of man’s identity—the spiritual sense—can indeed change a life. Where do we begin? Our prayers need to start with God, eternal good, whose presence and power are unchangeable. But as Paul’s experience proved, human thought is changeable. It is possible to awaken to the spiritual sense of good and exchange unproductive, immoral, and dangerous traits for truthful, compassionate, Christlike qualities.

The example I promised to share is of a young man who had been arrested for severely injuring someone who had assaulted his friend. After being incarcerated, he joined our group meetings in the youth correctional facility, where we talked about such basics as the Ten Commandments, the Beatitudes, and the Lord’s Prayer.

Week after week he became more attentive and curious about everything we discussed, including the spiritual fact that because God is good, man must also be good. This was a new and uplifting idea for him, as it was for most of the young men there. He especially liked learning that he didn’t have to react violently to others, but could respond with calm trust in God’s ability to guide him in handling a difficult situation.

As he and his fellow inmates learned that what they held in their consciousness could be seen in their experience, signs of character reformation became evident. Cockiness began to yield to a more humble, respectful demeanor. In learning how to pray, they came to appreciate and more often express toward others the qualities of the real, spiritual man of God’s creating. Many of the inmates said that for the first time, they felt worthy of God’s love.

Along with others in our study group, this young man experienced healing of discouragement, fear, hatred, and guilt for past wrongdoing, as well as healing of sickness. One time he severely injured his ankle on the basketball court and was in great pain. My husband and I prayed with him, explaining that God loves and cares for His children and doesn’t create suffering. We affirmed that nothing could injure his faith in divine Love’s protective care. Later he reported that he was able to play the game the next day without any pain at all.

He loved to learn about the spiritual freedom that comes when we look away from the material body and self and are instead present with God. And the practical effects in his experience were undeniable. It was a glorious day when the group received word that this young man had been granted a release time years earlier than his original prison sentence had called for. His example gave hope to the other inmates.

When we turn away from a flawed, material view of life and understand our innate perfection as God’s expression, the way opens for a change of heart and purpose. That’s the awesome power of the Christ at work in human consciousness.

“I’m free, I’m free / And freedom tastes of reality.”So begins a 1969 song by English rock band The Who, aptly titled “I’m free.” People in every corner of the globe yearn to feel, deep down, the t...

Reject the pull of the past

It is one of the most famous last lines in all of American fiction. Written by F. Scott Fitzgerald in The Great Gatsby, it speaks to the seeming pull of mortal thinking that would keep us from gett...

It’s not always easy to own up to wrong behavior. The human tendency is to hide the truth to protect oneself from humiliation and possible punishment. Anger, resentment, or disgust on the part of o... 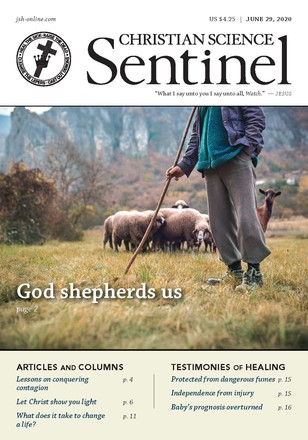 What does it take to change a life?

My thumb was perfect

Can prayer protect us?