I have at times allowed myself to entertain exclusive, negative thinking toward some people, even in church. And these judgments came when I really didn’t know these individuals well. However, I’ve worked to drop limited, prejudiced thinking and embrace everyone more fully.

Take age, for example. It’s nothing new. There is and has been a tendency to stick closely within one’s own age group, even in church. This may involve a lukewarm attitude toward generations not one’s own—even a disposition to avoid them or adopt a sort of standoffish thinking.

Over the last two years I’ve given special attention to pages 244–249 in Mary Baker Eddy’s Science and Health with Key to the Scriptures. In the last paragraph on page 244, under the marginal heading, “Man not evolved,” the first sentence reads: “Man in Science is neither young nor old.” That’s a spiritual truth—how wonderful and clear. Science and Health has helped me to grasp more clearly and deeply that by believing man to be a lot of young and old mortals running around, I’m buying into the false concept of man—the fleshly view—which is only a counterfeit of the real, whole, ageless man—the Christlike man that is your and my selfhood now and always.

The Christlike man is your and my selfhood now and always.

From time to time I’ve thought that the members of my church need to imbibe more of the Christ-spirit. But I realized that I can do my part and put my study into practice by embracing everyone, no matter their age. Well, naturally I began to become more friendly myself. For instance, after Wednesday testimony meetings, I would thank people for their testimonies in a sincere way. And I began to talk with some members outside my age group, sometimes even chatting until the doors would be closed! That almost never happened in the past. It was a natural step in progress—more love, self-forgetfulness.

The firm stand for and inspired vision of man’s spiritual individuality heals narrow, self-centered attitudes and brings us a wonderful freedom that others can’t help but feel. Embracing the spiritual conception of man results in our fulfillment of Christ Jesus’ command to “let your light so shine before men, that they may see your good works, and glorify your Father which is in heaven” (Matthew 5:16).

All those limiting, exclusive attitudes and actions based on age have naturally been dropped. I’m not ignoring my generation, but thought is more focused on qualities rather than personality, young or mature. I’m also generally judging people less on appearance, background, disposition, religious beliefs, etc. I’m shutting out people less.

I think the key to progress is to include “all mankind” in our prayers.

Mrs. Eddy says in No and Yes, “True prayer is not asking God for love; it is learning to love, and to include all mankind in one affection” (p. 39). I think the key to progress—the path to healing prejudice and discrimination—is to consciously include “all mankind” in our prayers, and we can joyfully do this throughout the day. Such genuine prayer impels us to love all that we come into contact with during our day.

Does loving others sometimes seem hard? When we’re sincere and persistent in our prayer to “include all mankind in one affection,” we realize that embracing all isn’t arduous, it’s a joy. And spiritual inspiration leads the way! 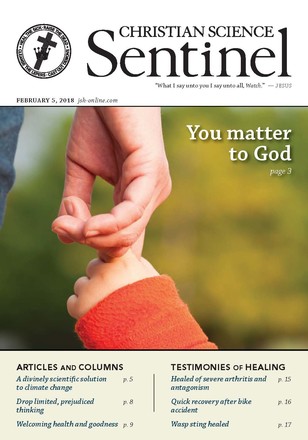 Why are Christian Science publications available to seekers in Reading Rooms?

You matter to God

Lessons in worth and humility

Healed of severe arthritis and antagonism