Looking at the world today, we may be tempted to believe that other forces besides God, good, exist to act, sometimes destructively, on mankind. One leading trend in common thought is to accept that illness, despair, and even death come to the globe in repeated, cyclical patterns. Specifically, a leading superstitious belief is that worldwide pandemics come in cycles of one hundred years—that in 1720, it was the bubonic plague; in 1820, cholera; in 1920, the Spanish flu; and in 2020, the coronavirus. However, according to an article on factcheck.afp.com (“Health experts dismiss false claim that COVID-19 fits a pattern of viral outbreaks every 100 years,” March 16, 2020), the dates believed to be associated with the arrivals of these illnesses aren’t even close to accurate. But the point here is that believing in such a pattern would encourage a fatalistic attitude rather than indicate opportunities for healing whatever threatens mankind.

In her textbook on prayer and healing, Science and Health with Key to the Scriptures, the Discoverer of Christian Science, Mary Baker Eddy, offers a way forward in this regard. She writes, “It is our ignorance of God, the divine Principle, which produces apparent discord, and the right understanding of Him restores harmony” (p. 390).

Any belief in cyclical events supposed to bring suffering can be ruled out through an understanding of God.

Throughout history, God has been mistakenly, even ignorantly, misrepresented to the world—one common example being the belief that God sends or allows evil. By his actions, Christ Jesus, the Son of God, corrected that view. If God sent or allowed sickness, sin, and death, then Jesus would have been going against God by healing those things. Yet, Jesus did heal countless people by drawing directly on the power of God and on his clear understanding of God as supreme good.

“There is none good but one, that is, God,” stated Jesus (Matthew 19:17). As people discover that God is purely good and that this divine good constitutes all true action, they begin to experience God’s majestic goodness tangibly and repeatedly. A study of Christian Science reveals the beauty of God’s goodness in action.

For example, in Science and Health Mrs. Eddy tells about curing a patient suffering from tuberculosis. This was accomplished through prayer alone—prayer that acknowledges the supremacy of God, good. Science and Health describes how the author prayed after learning that this patient suffered each time the wind was coming from the east: “I sat silently by her side a few moments. Her breath came gently. The inspirations were deep and natural. I then requested her to look at the weather-vane. She looked and saw that it pointed due east. The wind had not changed, but her thought of it had and so her difficulty in breathing had gone. The wind had not produced the difficulty. My metaphysical treatment changed the action of her belief on the lungs, and she never suffered again from east winds, but was restored to health” (pp. 184–185).

It must have been a great relief to that woman to be freed from the effects of a superstitious belief in repeated wind-related phases of evil. We might be a little amused by that account, yet any belief in cyclical events supposed to bring suffering is equally baseless in the divine order and can be ruled out through a deeper, truer understanding of God.

Christian Science teaches that God, supreme in all His action, operates uninterruptedly as Ruler over the entirety of existence, which is actually spiritual and good, not material and subject to evil. And as His creation—the spiritual image and likeness or ideas of God—we benefit greatly from this authority of divine good.

Does this seem difficult to accept? Then consider this statement from Science and Health: “If thought is startled at the strong claim of Science for the supremacy of God, or Truth, and doubts the supremacy of good, ought we not, contrariwise, to be astounded at the vigorous claims of evil and doubt them, and no longer think it natural to love sin and unnatural to forsake it,—no longer imagine evil to be ever-present and good absent?” (p. 130).

Projections regarding cycles of evil and disease are always conjectural, superstitious; they are not concrete and have no real authority. Pronouncements of the inevitability of disease, sin, lack, injustice, and death invite us to join with the world in bowing down to and fearing them. In light of these fears regarding cyclical evils, how important it is to gain and maintain a continual awareness of God’s supremacy so we won’t fall for them. Knowing the supremacy of God, divine Love—and staying alert to that reality—we won’t be convinced of or made to honor any superstitions.

Be watchful to defend your solid awareness of divine supremacy, which means that evil has no reality, authority, or activity. Know the actuality of God’s supremacy. To accept and understand that God is literally supreme over all can become one’s standpoint and outlook in praying effectively for mankind. It’s a joy to embrace this perspective, letting it permeate deeply all that we think and do. Under God’s utter authority, the notion that sickness can exist, act cyclically, and move contagiously from individual to individual—from one of God’s spiritual ideas to another—is exposed as a lie, completely groundless.

If you read through the Bible’s four Gospels, you’ll notice that Jesus never underestimated the constant action, power, and rule of God. In all his healing works, and in defending himself, he drew entirely and solidly on God’s supremacy and uninterrupted authority, knowing that he reflected that power. He stated, “All power is given unto me in heaven and in earth” (Matthew 28:18).

This same power of God to heal and defend is given to you and me, too. Jesus was our example, so what God provided for Jesus, He has also provided for us. God, who is divine Truth, defends us, not against real cycles of illness, lack, and injustice, but against the notion that cycles of illness, lack, and injustice could ever exist or be real. In the omniaction of God, there is no recurrent illness, and therefore, no reason for recurrent fear. To help everyone break free from cycles of suffering, our prayer for the world can include holding our perspective persistently to this spiritual truth: The utter goodness of God, century by century, is all that is repeating itself. 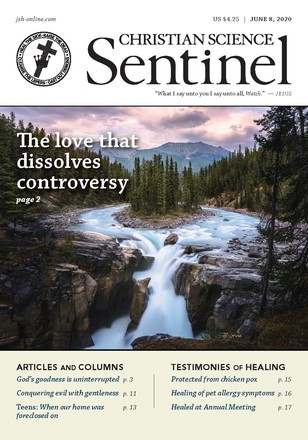 The love that dissolves controversy

The truth about grit

When our home was foreclosed on

The one comparison that matters