Like everyone, I have faced fears of the coronavirus. But whenever they pop up, I have a prayerful response inspired by words of defense spoken by Christ Jesus as he was being questioned by Pilate before the crucifixion. My prayer is, “You have no power over me!”

Pilate, governor of the Roman province of Judaea, had demanded of Jesus, “Why don’t you talk to me?” and continued, “Don’t you realize that I have the power to release you or crucify you?” Jesus answered, “You would have no power over me at all unless it were given to you from above” (John 19:10, 11, New Living Translation).

We can find safety in knowing that God is bigger and more powerful than any fears of a virus!

Jesus was not afraid of Pilate. He understood that his life was spiritual, in the hands of God, and that there wasn’t anything Pilate could do to stop him from succeeding in his mission. The merit of his faith was proved a few days later when he walked out of the tomb as he had predicted, having overcome death. He had proved that God was the only power over him.

Today, reports of contagion, infection, and death fill the airwaves and blanket the internet. Rather than being afraid, we can respond from the same basis of spiritual authority and dominion that Jesus did, when he told Pilate that he could have no power over him unless it were from God. We can follow Jesus’ example of unwavering faith in God and neutralize threats to our health with a clear understanding of God’s omnipotence. We can find safety in knowing that God is bigger and more powerful than any fears of a virus!

A few months ago, while traveling, I got very sick with flu-like symptoms that implied I was going to suffer a long time. I prayed diligently for relief, but felt I was losing the battle as symptoms worsened. As I groped for what to pray about, a glimpse of God’s almighty power suddenly lit my thought. The battle was not mine, I saw—it was God’s! God was the power that would defeat the disease, reverse its symptoms, and restore my health.

My feeling of helplessness vanished as I accepted God’s might at work on my behalf. I could trust God to work out spiritually what I was not able to do humanly. I felt a peace that signaled a turnaround, and soon fell into a sound sleep. When I awoke in the morning, all symptoms were gone. I was free. The suggestion that disease could displace God’s harmonious control over my being was proven false.

We can apply the same truths to the fears we might currently feel. The Christian Science textbook includes a “scientific statement of being,” which explains in its first sentence, “There is no life, truth, intelligence, nor substance in matter” (Mary Baker Eddy, Science and Health with Key to the Scriptures, p. 468). A virus, as matter, does not possess intelligence. It cannot plot, plan, or execute. It is mindless. Any effect associated with it is not coming from the virus itself but from fears and false beliefs about it built up in the public consciousness. The good news is that these fears and false beliefs can be reversed through an understanding of God and God’s all-power. As Mrs. Eddy wrote, “At a time of contagious disease, Christian Scientists endeavor to rise in consciousness to the true sense of the omnipotence of Life, Truth, and Love, and this great fact in Christian Science realized will stop a contagion” (The First Church of Christ, Scientist, and Miscellany, p. 116).

A consciousness that God—divine Life, Truth, and Love—has all power stops a contagion by dissolving the fears and false beliefs that spread disease. This is what happened during my night of suffering. I saw the omnipotence of God and lost my fear. Once my fear was conquered, the disease went away.

Jesus consistently illustrated the ability of God’s might to reverse the symptoms of disease. In one case, he healed the mother-in-law of his close follower, Peter. The Bible records, “When Jesus arrived at Peter’s house, Peter’s mother-in-law was sick in bed with a high fever. But when Jesus touched her hand, the fever left her. Then she got up and prepared a meal for him” (Matthew 8:14, 15, New Living Translation). Jesus knew that there is no power apart from God, and this understanding enabled him to heal and bless others, including this woman. Her fever vanished, and health was restored.

As Jesus understood, God is the only power over us. This is a demonstrable truth that we too can understand and prove. 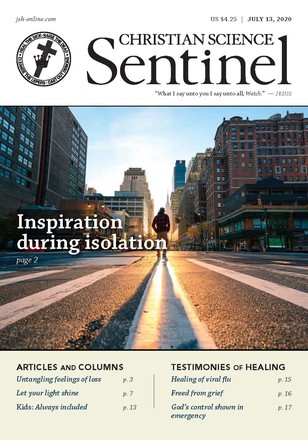 “You have no power over me”

I began to love paying my bills

Don’t let it harden your heart

By Pamela Thompson with contributions from Kiersten Thompson | July 2020

“What hast thou in the house?”

What does love have to do with ending a pandemic?