A metaphysical lesson from thermodynamics

As a college physics student in the ’70s, I was required to take introductory chemistry courses for my major. In one of the courses, we were being introduced to concepts of thermodynamics, which is the study of the scientific relationships of heat and cold. While I understood all the other concepts in the class, I was having difficulty getting my math to work in thermodynamics.

I’d been thinking about the process as a number line, with positive numbers being heat, zero being no heat, and negative numbers being cold. In other words, to me cold was a negative power that could cancel out heat and mathematically be subtracted from it. Using this process, I was unable to make my math work out, and I was becoming frustrated.

I visited my professor for help. He quickly discovered what I was doing that was incorrect. He explained that cold was simply the absence of heat—it was not a power that could cancel out or negate the effects of heat. Now that I understood this, my math worked, and I found thermodynamics to be one of my most enjoyable subjects.

Some years later I became a professional photographer. To make a good photo, photographers need to measure the quantities of light in a scene, adjusting the camera’s exposure to make the best use of the ratio between light and dark. A light meter is used to accomplish that task. But while photographers also need to evaluate the dark objects in a scene, they never use a dark meter. Why? Because there is no such thing as a dark meter—you can’t measure darkness; you can only measure light. Just as I had learned with heat and cold, dark is not a power in opposition to light; it’s simply the absence of light.

And there really is no such thing as total cold or darkness, because there is always a little heat or light somewhere. Therefore, cold and darkness are really supposed absences of heat and light.

As a Christian Scientist, I’ve found these principles helpful in understanding one of the fundamental truths of divine metaphysics: the allness of God, and the nothingness of evil. Just as with cold and darkness, evil is not an actual force opposed to good; it’s the supposed absence of good. Because the one, infinite God is all there is, and God is good. The concept of evil suggests that there is a place where good is absent, which of course is impossible because God is All-in-all. God, good, is without an opposite.

What a great concept! And when we understand the allness of good and the nothingness of evil, even the supposition of evil vanishes from our consciousness. Because our experience is the result of our thinking, goodness is manifested in our lives in direct proportion as we align our thinking with the Christ, all the goodness of God.

The discovery of Christian Science has made the concept of evil obsolete.

Now this isn’t just a “Pollyanna” attitude of positive thinking. It’s scientific. Science is the process of gaining an understanding of truth, and then practicing it in our experience. When we apply our understanding of the allness of God and the nothingness of evil to whatever challenge or situation we’re facing that needs healing, harmony and the appropriate resolution become manifested in our experience—and that’s scientific.

Wasn’t it this very concept that allowed Jesus to heal so easily? Christian Science explains he was aware only of the presence of God, and the power of the Christ—God’s goodness—in the human experience. And he was completely confident in the Christ as an unstoppable healing power.

An example of Jesus’ recognition of spiritual good, despite the evidence of the physical senses, is his healing of Jairus’ daughter (see Mark, chap. 5). Jairus appealed to Jesus to come to his house and heal his daughter, who was at the point of death. Jesus left immediately, but while on the way, he healed a woman suffering from an issue of blood. One of Jairus’ servants showed up and announced that it was not necessary for Jesus to come, as the daughter had died. But Jesus replied to Jairus, “Be not afraid, only believe.”

When Jesus arrived at Jairus’ house there was a great deal of commotion with mourners weeping over the daughter’s death. Jesus told them, “The damsel is not dead, but sleepeth.” The mourners, who, it would seem, believed in the reality of evil and what the material senses were telling them, laughed at him. In fact, the Bible says, “They laughed him to scorn.”

So he “put them all out,” took the girl’s parents and a few of his disciples with him, and went into the room where the daughter was lying. Jesus then took the girl by the hand and asked her to get up—which she did, completely healed.

For Jesus, raising the dead, a seemingly impossible task from a mortal perspective, was natural and immediate. He taught, “It is the spirit that quickeneth; the flesh profiteth nothing” (John 6:63). This understanding of the ever-presence of God as Life, and the consequent absence of any opposing presence or power, enabled him to counteract the material evidence.

Referring to Jesus in her book Science and Health, Mary Baker Eddy says: “The ‘man of sorrows’ best understood the nothingness of material life and intelligence and the mighty actuality of all-inclusive God, good. These were the two cardinal points of Mind-healing, or Christian Science, which armed him with Love” (p. 52).

While healing often takes place quickly, sometimes it may take longer. When facing a healing that seems protracted, I find comfort in the fact that Jesus’ healing work was instantaneous and that he told us, “He that believeth on me, the works that I do shall he do also; and greater works than these shall he do; because I go unto my Father” (John 14:12). He showed us the way, setting an example for what is possible when one gains higher, purer inspirations of Truth.

Science and Health offers this scientific conclusion: “The physical healing of Christian Science results now, as in Jesus’ time, from the operation of divine Principle, before which sin and disease lose their reality in human consciousness and disappear as naturally and as necessarily as darkness gives place to light and sin to reformation” (p. xi).

Once I remember feeling the symptoms of the flu starting up in my body. My first thought was, “Oh no, not with all I have to do the next few days.” But I quickly corrected my thinking. I’d been praying that morning to understand and feel God’s presence, and the consequent “never-presence” of evil. In an instant it was so clear to me that the symptoms were just a false suggestion, and that all evil—sickness and disease included—could ever be was a hypnotic lie. What was really true was my spiritual identity as the manifestation of the all-good God. I was indeed what God was expressing in me, and nothing else. I stayed with that thought a few moments until I had a sense of peace and confidence about it. Then I went about my business and forgot the whole thing. Later that morning I realized I was completely free of the flu symptoms, and they did not return.

So much of commonly held belief is based on acceptance of evil as a real force in human life—a force in so-called balance with God, something to be reckoned with but never completely defeated. The discovery of Christian Science has made the concept of evil obsolete. When we think along those lines of the allness of God and the nothingness of evil, fear melts away because there is nothing left to fear. God, good, is all, and there truly is nothing else!

Rick Dearborn is Director of Digital Media at Principia College.&nbsp; 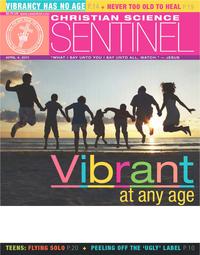