Guided through a school exam

I recently finished my sophomore year of college, and last semester I had a wonderful experience with a particularly challenging exam.

I knew the exam would be difficult, so I put a great amount of time into studying for it. Two days before the exam, I happened to be talking with my sister over the phone, and I mentioned the upcoming exam and how hard I thought it would be.

She reminded me that God supports and provides for us completely and doesn’t abandon us or give us only part of what we need. My sister pointed out that God, divine Mind, would not just take me halfway through college, halfway through a class, or halfway through an exam, but would take me all the way through to its rightful completion.

My approach toward this exam changed after that phone call. I still put in several more hours of studying the course material, but I also took time to prayerfully prepare for the exam. I worked with the idea that my intelligence comes from divine Mind, and that this meant that I couldn’t lack any knowledge I needed.

By the time I took the exam, I was actually rather looking forward to it. This was a physics exam, and although it had only three problems, each problem had roughly six parts, and the exam was expected to take two hours. By the time I finished the parts I knew, I had twenty minutes left to finish the last third of the test, and I had no idea how to do any of it. I spent the next five minutes frantically working on various parts of the remaining questions but not making much progress.

With only 15 minutes left, I had the thought that I had used all of my preparation from studying, so now was the time to use my preparation from praying. So with an effort, I put down my pencil, folded my hands, and prayed. I knew that God would not take me just halfway, or even two-thirds of the way through the exam, but God would take me successfully all the way through the exam.

When I looked back at the paper, I had a few ideas and worked through everything except one last part of the second problem. I had no idea how to even approach that part, and I had only five minutes left. The only thing I knew about that part was that it would take a while to complete based on the information I was given.

Again, I put down my pencil and folded my hands. I just listened for God’s guidance, knowing that my intelligence comes from Mind, God, and not from a limited human or mortal mind. Even though an aggressive suggestion was telling me that I wouldn’t be able to finish the test, I felt confident that I would finish. A sense of great peace and calm trust came over me.

Then the thought came to me to write. I picked up my pencil, but could not think of anything to write. I didn’t even know the first step to solving the problem. I had no relevant equations to write down. I had nothing. So I finally wrote down —the symbol for the value I was looking for.

As soon as I wrote that, I remembered that the day before, during my professor’s office hours, he offhandedly mentioned an equation used to find that value and had jotted it down sideways in tiny letters in a corner of the board. I hadn’t even bothered to read it because it seemed so insignificant. But that was all I needed. I knew that divine Mind is all-knowing. As an expression of that Mind, I would be able to recall what I needed. God had guided me this far already, so He would take me all the way.

I put my pencil to the paper and wrote the equation. Then, in the remaining three minutes, I found the value.

At exactly two hours, the maximum time allowed for the exam, I walked down the hall to turn in my exam. What a joyful afternoon I had after that!

When the professor handed them back, he also complimented me on how well I had done. However, I know that the good result was not so much because I had studied hard, as it was because I had prayed and let God guide me through the exam. 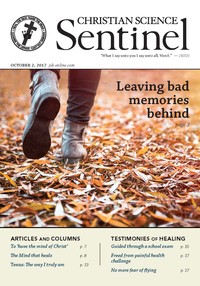