Taken aback, I looked up at my track coach. I had been enjoying our 100-meter sprint workout. But my coach said I looked tense, over-focused, and almost angry.

“Then just let yourself run,” he encouraged me. “Don’t push.”

I let that sink in. I realized that I didn’t need to put pressure on myself to run; I just needed to tap into the ability I already had and let myself go as fast as I could. Applying what my coach shared with me, I began to see progress in my running ability and was not as tense when I was sprinting.

I already translate a lot of what I learn from running into other aspects of my life. However, this particular concept of “letting” versus “pushing” really caught my attention, and I’ve thought a lot about what that means from a spiritual perspective.

I am the shining of God’s good light.

One of the things it reminded me of is an explanation of God’s law from the article “God’s Law of Adjustment” (Adam Dickey, The Christian Science Journal, January 1916). The author wrote: “We are not responsible for the carrying out of this law [God’s law]. In fact we can do nothing in any way to increase, stimulate, or intensify the action or operation of divine Mind, since it is constantly present, always operative, and never ceases to assert and declare itself when rightly appealed to.” I often return to this idea of rightly appealing to God’s law when something seems to need adjusting. As children of God we are not responsible for God’s work, but we can pray to see through a personal sense of ourselves and know that we reflect God. We can understand that what God is doing is effortlessly expressed through us as we stop pushing, trying, or asserting ourselves in some way, and let God shine.

Christ Jesus was such a good example of getting a personal sense of himself out of the way. He really understood his relationship to God, as His Son. He explained it when he said, “The Son can do nothing of himself, but what he seeth the Father do” (John 5:19). Jesus lived to show us what is true for all of us as God’s sons and daughters; we reflect God. There is no forcing a reflection. There is no struggling, pushing, or shoving. In the same way that you don’t have to will your reflection to appear—it just does—so God does not need to will any of us to be His reflection; in our true being, we just are His reflection.

I’ve found a lot of freedom in putting this idea into practice. For example, I used to be incredibly shy and have a difficult time speaking up for myself—to the point where if I was in a restaurant, I didn’t even want to ask a waiter for water or extra sauce for something I was eating. I didn’t want to speak up in front of my peers or be in situations where I had to be the center of attention.

But now, I “let.” As it says in the Bible: “Let your light so shine before men, that they may see your good works, and glorify your Father which is in heaven” (Matthew 5:16).

Before I understood this idea of letting, I would have read that passage and said it was a nice idea but that it would take too much confidence to put it into practice. But now I read that passage and know that my light is shining and always has been. I don’t have to be afraid, because I am the shining of God’s good light. This has been helpful in social situations. Not just so I can walk up to the waiter to ask for the extra sauce, or where the restroom is, although that is wonderful. But I can also strike up conversations at parties now. I can talk to my peers and even adults about important issues in our society.

This is a growing process for me. But I’ve made so much progress, and it’s comforting to know that it’s not my responsibility to push, or to force myself to be God’s reflection. As Jesus said, “I can of mine own self do nothing” (John 5:30). The better I understand that, the more I feel God guiding and governing me, and the more effortlessly I can be a transparency for all that He is. 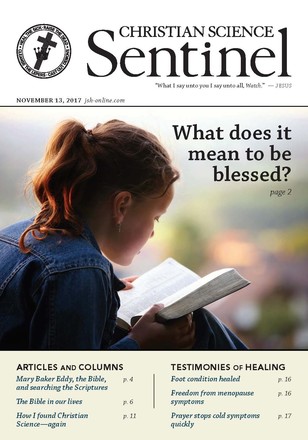 What does it mean to be blessed?

‘The Light will shine in darkness’: Mary Baker Eddy, the Bible, and searching the Scriptures

The Bible in our lives

How I found Christian Science—again

Safe from the storm

Calming the storm of fearful predictions