Human law accords men the right of appeal. An unfavorable decision rendered in a lower court may be taken to a higher court, where a reversal of the decision may be sought. Divine law, contained in the Bible and explained in Christian Science, reveals mankind's moral right to appeal injustices of every kind to the court of Spirit. Here divine mercy annuls verdicts that threaten man's life, health,and usefulness.

Let one who may be faced with a cruel verdict turn to this higher court where God is the Judge, and in the words of the Psalmist pray, "Let my sentence come forth from thy presence." Ps. 17:2;

Precedent for such appeals may be found throughout the Bible, especially in the healing ministry of Christ Jesus. Every phase of injustice imposed by medical beliefs or theological misconceptions yielded to the Master's understanding of the law of Love. His healing works consistently proved that the sentence which comes forth from the divine presence is perfection and freedom.

In Science and Health with Key to the Scriptures Mary Baker Eddy, the Discoverer and Founder of Christian Science, writes, "Ignorant of our God-given rights, we submit to unjust decrees, and the bias of education enforces this slavery." Science and Health, p. 381; A little further on she states, "It is man's moral right to annul an unjust sentence, a sentence never inflicted by divine authority." Through an allegory found on pages 430 to 442 of Science and Health, Mrs. Eddy illustrates how an understanding of one's God-given rights corrects injustice and restores health.

This allegory depicts the trial of a case of illness in the way cases are tried in court, The defendant, Mortal Man, is tried first in the lower Court of Error, where the testimony before Judge Medicine, including that representing Health-laws, results in a sentence of death. Of this critical point, Mrs. Eddy writes, "Ah! but Christ, Truth, the spirit of Life and the friend of Mortal Man, can open wide those prison doors and set the captive free." pp. 433, 434 ;

The case is then appealed to the Supreme Court of Spirit, where Mortal Man is defended by Christian Science. Argument based on Scriptural evidence that man is subject to divine law alone annuls the sentence of death and sets Mortal Man free.

How comforting it is to learn that we are never helpless when disease threatens, when heredity or environment seems to impose limitation, or when human justice fails! We can always take our case to the court of Spirit, where there is recourse to a law that supersedes medical opinion and fallible human judgment.

How do we enter this court and plead our case there? To enter the court of Spirit, one must turn from the false testimony of the physical senses to the truth of God's ever-presence and of man's inseparability from His love.

Our plea before this court is based on the realization that man is the spiritual image and likeness of God. He is not a mortal at the mercy of material laws or adverse circumstances. As the beloved child of God, he is under the jurisdiction of divine Truth and Love. Spiritual laws, the forces of good, sustain his existence and maintain his birthright of dominion over all the earth.

These ever-operative laws are enforced by a divine Principle that governs the universe, including man, with unerring intelligence and invariable love. As these laws are understandingly applied to human situations, errors of belief are destroyed and harmony restored.

Every appeal to the court of Spirit is granted an immediate hearing. But patient persistence is required in refuting the arguments of material sense with true, spiritual facts until one's belief in the reality of evil is overcome. Then one will understand and demonstrate that the law of divine Love confers perfect freedom.

At one time a student of Christian Science found herself in a situation involving serious injustice. She appeared to be a victim of deception. It seemed that her only recourse was to seek legal redress. But when her case was tried in court, the presentation of the facts was so mishandled that an unfavorable decision resulted.

She was then advised by her attorney of her right to appeal the case to a higher court. Much doubt was expressed, however, that the decision of the lower court would be reversed. When the young woman turned in this dilemma to an experienced Christian Scientist, she received this reassuring advice: "You must take your case to a higher court; take it to the court of Spirit, where divine justice is always done!"

With the support of a Christian Science practitioner, the student lifted her thought to the court of Spirit and steadfastly pleaded her case there. As this prayerful work continued, fear and frustration were replaced by a joyous expectancy of good.

Knowing that God's plan of unlimited, purposeful activity for each of His ideas cannot be thwarted, the student turned for guidance to the one Mind. The six years that followed were rich in opportunities for useful service and steady growth in spiritual understanding. Then the way opened for legal action to be taken once again. This time the redress that she sought was granted without difficulty. How deeply grateful she was for this proof that "justice and judgment are the habitation of thy throne"! Ps. 89:14;

Freedom from injustice of every kind will be realized in the experience of each one who humbly and trustingly takes his case to the court of Spirit. As he faithfully pleads his cause according to the divine statutes taught in Christian Science, the truth of Isaiah's promise will be attested: "The Lord is our judge, the Lord is our lawgiver, the Lord is our king; he will save us." Isa. 33:22. 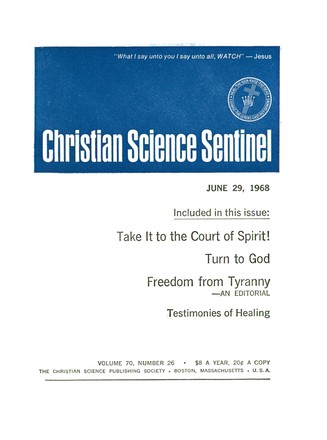 Take It to the Court of Spirit!

"The poor in spirit"

My mother learned of Christian Science before I was old enough...

After more than four years of active military service during...

I should like to express my sincere gratitude for all the blessings...

My written testimony of the healing efficacy of Christian Science...

The speaker is Philip Metcalf, a Christian Science practitioner. The questioner is Harlan Witham, a personnel executive. | June 1968