Early one Saturday morning, I was about two thirds of the way...

Early one Saturday morning, I was about two thirds of the way through a fifty-mile bicycle ride through some beautiful coastal mountains near my home. The highway I was riding along is notorious for fast-moving and careless drivers. Nevertheless, it's one of my favorite rides, which I've taken more than a dozen times.

As I was nearing the crest of a hill, a large car, traveling about fifty miles per hour, hit the side of my bike. In the instant that followed I could tell that not only my bike but the entire left side of my body had been hit. I wobbled into traffic, narrowly avoiding being hit head-on by an oncoming car. My feet were firmly clipped onto the pedals, but I was able to make my way to the side of the road and unclip them.

I must admit that there was a moment of intense fear. But the fear was quickly replaced by an immediate, tangible sense of God's presence. Before looking at my bike or my body to assess any damage that might have been done, I closed my eyes and declared out loud that I was God's perfect, unharmed, untouched reflection. In that brief instant I turned with all my heart, all my effort, to listen (another word for pray) only to what God was revealing to me about His child. I could literally feel God's presence surrounding me at that very moment.

When I opened my eyes, what I saw seemed at first unbelievable. The only evidence I could find that my bike had been hit was the tiniest nick out of my handlebar padding. There was only a slight bruise to my leg and a tiny scratch on my arm. It was as if nothing had happened. And in the truth of divine reality, nothing had. I was elated. I knew that I was witnessing God's omni-presence, His omnipotence.

I could literally feel God's presence surrounding me at that very moment.

Two cars pulled over, including the man who had hit me, to see if everything was all right. I was literally overjoyed to report that everything, including my bike, was in perfect condition.

The man who hit me was visibly shaking. Another woman and I were able to reassure him that everything was in order, and he eventually calmed down. Looking back, I can see that this was further evidence of the completeness of the healing, as I was able to speak to this man without the slightest bit of anger or resentment about what had happened.

After a few minutes I climbed back on my bike and continued my ride with an almost overwhelming sense of energy and joy. I couldn't help declaring out loud, over and over again with the deepest sense of gratitude and humility, "Thank God, thank God, thank God." As I passed the car that had hit me, parked along the side of the road, I could see that the passenger-side mirror had broken off and was hanging on the door by only a few electrical wires.

As I continued my ride, I felt as though I had just witnessed something that I couldn't completely explain. I recalled something that I had written down in my notebook some four months earlier. Thinking about this statement in Science and Health, "Accidents are unknown to God," I had posed to myself the question "If there are no accidents, then how can you explain the undeniable physical evidence of an accident?" My response, which I wrote down, went something like this: "To the degree that we understand, in divine Science, that there are no accidents, we begin to suffer less from the so-called mental and physical effects of accident." This healing angel thought from God came to me months before the occasion arose for it to be applied. I knew, and could now see, that the basis for declaring that accidents are unreal is grounded in the fact that God's man can never be misguided or subject to any law but the divine. This train of thought was confirmed later that evening as I reread the complete statement: "Accidents are unknown to God, or immortal Mind, and we must leave the mortal basis of belief and unite with the one Mind, in order to change the notion of chance to the proper sense of God's unerring direction and thus bring out harmony. Under divine Providence there can be no accidents, since there is no room for imperfection in perfection" (Science and Health, p. 424). During the next few days, the slight tenderness in my arm and leg diminished steadily. Any fear or trauma never surfaced. In fact, I got up early the next morning for another ride maneuvering in and around traffic without any apprehension whatsoever.

This is a wonderful Science. It is vital, practical. What a great feeling to be able to turn to our Father-Mother God in prayer, and in return receive the angel thoughts required to heal any situation. 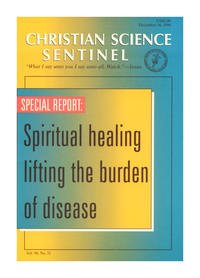