I WAS JUST TWO DAYS away from my trip to the United States. I was going to study at Principia, a school for Christian Scientists, where I didn't know anybody.

As I was getting ready at a salon, a stylist accidentally burned my face with hot wax when she was waxing my upper lip. When I got home, I told my mom what had happened, and immediately we began to pray. We also called a Christian Science practitioner to help us pray, becaue I was really afraid. My skin had started to look very ugly and rough.

The practitioner directed me to several citations from Science and Health so that I could read quietly and calm my thought. She'd noticed that my biggest fear was what others might think, in a country that was then unknown to me. So the practitioner said something like this: "When you pray, pray so that everyone will see what is inside you—not just your appearance, but who you really are as a child of God."

Of course this sounded nice and all, but I was 16 at the time, and physical appearance seemed pretty important to me, In fact, it was something I had never felt too comfortable with (I had always thought of myself as too tall, or too skinny, or perhaps my teeth were too big, etc.). The practitioner was helping me pierce through this dream, this idea that my appearance could limit me in any way. She was inviting me to pray so that others could see the good in me, regardless of what I looked like. The idea of simply expressing God freely, without being limited by my appearance, opened the door for healing of the burn to take place.

Before I left for school, friends and relatives came to say goodbye. Many were first curious and then truly worried about the way my face looked. Many predicted I might have a scar for the rest of my life. But my family and I kept praying, knowing that "comeliness and grace are independent of matter. Being possesses its qualities before they are perceived humanly. Beauty is a thing of life, which dwells forever in the eternal Mind and reflects the charms of His goodness in expression, form, outline, and color" (Science and Health, p. 247).

Thinking about the truth behind those statements brought me a great sense of peace, enabling me to know that beauty had never been, nor would ever be, limited by matter. I was as beautiful as the qualities I reflected. Soul, one of the synonyms for God, includes grace, beauty, and gentleness. Everyone can express this beauty that comes from Soul and does not depend on what eyes might see.

Appreciating others' beautiful spiritual qualities—which have nothing to do with their physical appearance—has allowed me to express what I really am.

This renewed understanding of my relationship with God showed me that I was nothing but Soul's pure reflection. And this helped me heal. During the 24 hours of my journey from Montevideo to St. Louis, I read Science and Health in every plane and airport I was in, affirming to myself that Christian Science really is a Science and is provable. It is the law of God in action and therefore cannot fail. There could be no evidence of what had never touched my true spiritual identity, because Soul had never stopped expressing beauty.

Two days later, my face was healed. And by the time I had to go to my classes a few days later, there was no evidence of the accident—no scars or any kind of marks left.

Thanks to this experience, I grasped the true meaning of this passage from Science and Health: "Beauty, as well as truth, is eternal; but the beauty of material things passes away, fading and fleeting as mortal belief" (p. 247). Appreciating others' beautiful spiritual qualities—which have nothing to do with their physical appearance—has allowed me to express what I really am. True beauty and satisfaction do not depend on physical appearance, because beauty is in reality a quality of Soul, God. During my time at that school, and later in college, I have had the opportunity to make lots of friends who appreciate me for who I am.

It's such a relief to know that expressing Soul is the recipe for beauty!

This article can be found on the Spanish Herald website, El Heraldo de la Ciencia Cristiana (www.etheraldocc.com), and will appear in the Portuguese Herald, O Arauto da Ciencia Crista, in October.

Ifigenia Xifré, known as lfi, is from Montevideo, Uruguay, and is a student of political science (International Relations track) at Principia College. 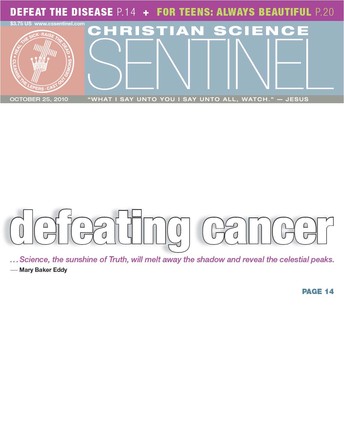 AN UNDERSTANDING THAT BRINGS HEALING

with contributions from Naomi Levy | October 2010

A NEW VIEW OF THE WEATHER

HOW EVIL DESTROYS ITSELF

Inventive ideas and their divine source

God is our refuge

LOSING MY JOB LED TO FINDING MY GOD