How one writer from Canada is praying about disturbing incidents in the news.

First appeared as a web original on December 3, 2010

Recently, people in Ontario, Canada, have been grappling with the extensive media coverage of the court case involving the rapes and murders of two Bellville women. The perpetrator was convicted and sentenced to life in prison.

This image brought to mind the story of Stephen from the Bible. The book of Acts describes him in this way: “full of faith and power, [he] did great wonders and miracles among the people” (Acts 6:8). When falsely accused and brought to trial, he spoke with boldness and courage. For this he was stoned, but not before two significant things happened. First, “he . . . looked up steadfastly into heaven, and saw the glory of God.” Then, as they stoned him, he said, “Lord, lay not this sin to their charge” (Acts 7:55, 60).

I’ve always been so moved by this story, somehow surprised that it did not leave me with a sense of grief or failure. Nothing in this account portrays Stephen as a victim. In the face of hatred, injustice, violence, he is calm and confident in the power of God. He forgives them and falls asleep. It’s almost as if he has not been touched by any of it. Stephen’s legacy is not one of defeat, but moral and spiritual courage—transcendence.

There’s a passage in Mary Baker Eddy’s book Science and Health that speaks to this: “Moral courage is ‘the lion of the tribe of Juda,’ the king of the mental realm. Free and fearless it roams in the forest. Undisturbed it lies in the open field, or rests in ‘green pastures, . . . beside the still waters’ ” (p. 514).

Perhaps Stephen’s experience hints at something so much bigger: the ultimate confrontation of good over evil, and the individual footsteps we all must take. It speaks to the victories that take place in moments, in degrees; victories that become building blocks as we discover and act on the power of good. Every experience then serves to strengthen and equip us with greater courage and confidence in God, even as we continue to face down elements of hatred, lust, terror, injustice, indifference: each individual triumph a step forward for humanity.

Some years ago my husband and I had the opportunity to travel to South Africa as part of a lecture tour with the Christian Science Board of Lectureship. I was invited to speak with the Mosaic Women’s Training and Healing Centre in Cape Town. At the time, Cape Town had the highest rape rate in the world, and the lowest conviction rate. This organization started as a court advocacy program for women and expanded to counseling and training. Women who come to the Centre for support, healing, advocacy, and protection are then trained to become advocates and resources for the people in their own communities. The program has a spiritual component at its core.

Our gathering took place in the township of Gugulethu and included women with a range of backgrounds, race, and educational experience. All of them had come through harrowing experiences of rape and abuse.

We sat in a circle, faces turned openly to each other, and after brief introductions they sang for us. It would probably be more apt to say they transported us. Their voices: searing harmonies of suffering overcome; soaring gratitude for lives made new; grace of spiritual strength discovered.

One by one the women shared their stories. They detailed briefly the things that had brought them to this place: abuse, violence, despair. But they didn’t linger there for long. Eagerly they shared what had changed them, how they had found healing. One woman spoke of the freedom she found in forgiveness: how the violent images began to recede as she offered up her love in return for them.

When it came my turn to talk, I wasn’t sure what to say. What could I add? I’d never felt such power in one place before: the palpable, tangible expression of omnipotent Love; practical, bold illustrations of what happens when we live Jesus’ pure teachings; so radical, basic, imminent, transcendent.

I’d always loved Mary Baker Eddy’s statement, in discussing the woman described in Revelation (12:15, 16) that “in this age the earth will help the woman; the spiritual idea will be understood” (Science and Health, p. 570). But now I felt it, saw it, understood it. I think these women had discovered that their resources were spiritual, and that they were not powerless, damaged, forgotten, or without recourse.

The indignities of poverty, prejudice, ignorance, injustice, lust, and hatred had failed to defeat them. Glimpsing their inherent spirituality, recognizing their divine value, they experienced radical renewal and transformation. With strength borne of experience and spiritual understanding, they were soundly equipped to instill hope, and to help others find their way.

When I shared the passage above with the group, and told them about Mary Baker Eddy and her discovery of Christian Science, they nodded in recognition. Each one of them knew something of the power of spiritual discovery, and the change it brings. As we sat there sharing, I thought about a wise individual spoken of in Ecclesiastes—one whom no one remembered, a man who saved the city (9:15).

I could see how each of these women was like that wise man, bringing change to their communities and the world through spiritual awakening, spiritual discernment, forgiveness, and love. Much of what they contribute may go unnoticed, certainly not broadly known, but never without effect—even as light shines and the buds begin to blossom.

So many experiences in life call out for healing. As Mary Baker Eddy says: “The sharp experiences of belief in the supposititious life of matter, as well as our disappointments and ceaseless woes, turn us like tired children to the arms of divine Love. Then we begin to learn Life in divine Science” (Science and Health, p. 322). Life that cannot be ravaged, damaged, diminished, or destroyed. And so we can turn, turn away from the consuming images, memories, fears, intrusive, corruptive mental clutter, to find the calm center of spiritual goodness that lies within all of us.

With thoughts and actions anchored in the relentless, irresistible presence of omnipotent Love, we begin to find ourselves restored, unintimidated, facing down the shadows of darkness and fear. Herein, as Toronto Star writer Mallick writes, we “withstand the force of cruelty,” we find that which is “vivid and timeless,” and we win.

Joni Overton-Jung is a Christian Science practitioner and teacher. She lives in Toronto, Ontario.&nbsp;

Send a comment to the editors
NEXT IN THIS ISSUE
Question of the Week
How has prayer helped you overcome difficult memories or traumatic experiences? 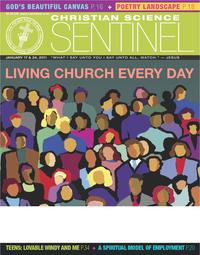