My dad married my stepmother when I was very young. After they adopted children, I felt that my dad and stepmom favored them over me. Though I visited Dad’s home weekly, I always felt like a guest rather than a family member.

My stepmom and I had some good times early on, but things between us became difficult starting in my teens. Our relationship grew worse when Dad passed on. It was a very stressful time, and I became severely depressed. A friend who was a Christian Scientist offered to pray daily for me, and to my deep gratitude, the depression was overcome. But the difficulties with my stepmother continued.

Finally, through my own prayers and study of Christian Science, I had an awakening and realized that I needed to forgive my stepmom for all the ways I felt she had hurt me over the years. I read some statements Mary Baker Eddy makes about forgiveness, such as this one in Miscellaneous Writings 1883–1896: “Hate no one; for hatred is a plague-spot that spreads its virus and kills at last.… If you have been badly wronged, forgive and forget:…” (p. 12).

This statement Mrs. Eddy makes in Science and Health with Key to the Scriptures was also helpful: “When we realize that there is one Mind, the divine law of loving our neighbor as ourselves is unfolded; whereas a belief in many ruling minds hinders man’s normal drift towards the one Mind, one God, and leads human thought into opposite channels where selfishness reigns” (p. 205).

With a more divinely inspired outlook, I stopped playing the victim and started looking at my stepmom through spiritual eyes. I asked myself, “How would Christ Jesus see her?” In Christian Science I had learned that we don’t have to love a flawed human personality. The Christly way of viewing others is to look for the perfect, spiritual identity that God created—to see only the goodness and innocence that are innate to us all as God’s children.

As I prayed to see my stepmom rightly, I began to notice good qualities I had taken for granted before. I remembered that whenever I had an emergency, she was always there. That was huge! I expressed my gratitude for this, and I could tell that hearing that meant a lot to her. As my prayers continued to help me appreciate my stepmom more, our relationship gradually got better and better, and she softened when she spoke to me.

Some time later, my stepmother started confiding in me about challenges in her life, and I started helping her by sharing ideas from Christian Science. She was receptive. One day when she remarked that there was no book that could help, I told her I had just the book and would send it to her. I sent her a copy of Science and Health, and she now reads it. Recently she told me how much it helps her.

I am so grateful for the mutually supportive relationship my stepmom and I have today. And I am very grateful for Christian Science. 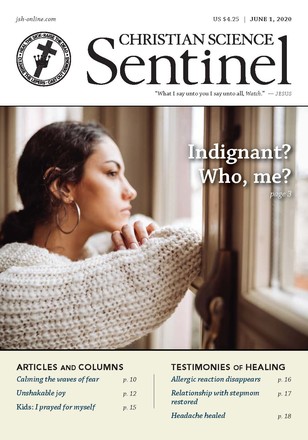 Metaphysics shared from the heart

What sets the captive free?

How I prayed about my master’s thesis

Calming the waves of fear

I prayed for myself—without anyone’s help

Our right to freedom from self-righteousness