Overcome with fear, and with little hope that I would survive, I had difficulty sleeping and retaining food. I was terrified that I would step on or trip any one of a variety of booby traps. Recognizing I had to get a handle on this fear, I skipped my final training session and returned to my hooch, where I tried to pray.

I had been raised in Christian Science, and attended a summer camp for young Christian Scientists every year. There I learned to love God and live Christian Science every day. Every morning before breakfast we would begin with this prayer: “Dear Lord, may we through Thy love reflected this day, bring some ray of sunshine into the lives of those about us. Make us obedient to the truth, and give us courage to do what we know is right, thereby guided by Thy divine will.” Although I had also begun every day in Vietnam with this prayer, I found it was not enough to meet my overwhelming fear.

I was struggling with many questions: Why was I drafted? What was my purpose there? And why was I assigned to such an arduous place? I had no answers. My thoughts were riddled with self-pity, self-justification, self-condemnation, and self-doubt. There seemed to be many human minds at work in Vietnam, and all of them outranked me. Through my prayer that day it came to me to stop questioning, to stop arguing with God. This loving rebuke allowed me to release a personal sense of things and recognize that God was working His purpose out for me. I leaned on this familiar verse from Proverbs: “Trust in the Lord with all thine heart; and lean not unto thine own understanding. In all thy ways acknowledge him, and he shall direct thy paths” (3:5, 6).

Through my prayer that day it came to me to stop questioning, to stop arguing with God.

My mom wrote me a letter nearly every day. One letter included this quote from Science and Health with Key to the Scriptures by Mary Baker Eddy: “Step by step will those who trust Him find that ‘God is our refuge and strength, a very present help in trouble’ ” (p. 444). My only step, my only responsibility, was to trust and love God as our Father-Mother.

I reached for my Christian Science Quarterly, which I kept stored in my duffle bag, and was led to turn to the Bible Lesson on the subject “God,” where I happened upon the story of Daniel in the lions’ den (see Daniel 6:1–23). I read it over and over, and gradually felt God’s loving presence like never before. My fear diminished, my appetite returned, and I felt well for the first time since I landed in Vietnam. Just as Daniel’s protection came from his trust in God rather than from any human skill at taming lions, my protection was dependent wholly on God, not my infantry skills. I realized that willfulness, personal sense, and human outlining had tainted my prayers over the past five months, and I resolved to yield to the one, omnipotent Mind, God.

I was then led to study the Bible Lesson on the subject “Love,” which included Mrs. Eddy’s spiritual sense of Psalm 23 found on page 578 of Science and Health. Her substitution of the synonym Love for each reference to God in the psalm was deeply helpful to me—for example, “… [love] leadeth me beside the still waters,” and “[Love] restoreth my soul [spiritual sense]:…” It gave me a profound sense of compassion and love for my fellow draftees, many of whom were grappling with the same fears. By taking my thoughts off of myself, I began to see everyone as a complete and individual expression of divine Love. The terrible fear of booby traps that had so mesmerized me lifted. In every way I felt relief, and I began to feel “the unspeakable peace which comes from an all-absorbing spiritual love” (Science and Health, p. 264).

The next day I was called out of my mission briefing and told to report to a warrant officer. Expecting to be punished for skipping the previous day’s training session, I was surprised when the officer said he’d noticed in my personnel file my claim that I could type 30 words per minute, a figure I had embellished because I was embarrassed by my actual typing speed. Having never actually exceeded 25 words per minute, I was apprehensive when he ordered me to take a typing test, but as I sat down at the typewriter, I recalled the calming words from the second verse of Hymn 64 in the Christian Science Hymnal: “I feel the calm and joy of things immortal, / The loveliness of Love is all around” (Violet Hay).

Suddenly, any sense of pressure or fear disappeared. I felt as though I had ten fingers on each hand! My typing was effortless, and as I finished I felt a oneness with our Father-Mother God. I was informed that I had actually typed 61 words per minute, with no errors, and was the best typist in the division. I was reassigned to a position typing airline tickets for enlisted personnel who had completed their tours and were going home. This assignment was a blessing. I felt a sense of love with every ticket I handed out. I felt I was serving God, and for me, there could not have been a more gratifying position in Vietnam.

I served 398 days and received nearly 398 letters from my mother, each one like a “cup of cold water in Christ’s name” (Science and Health, p. 436). I learned that what to my human sense had seemed to be the worst possible situation was, in fact, an enduring blessing, proving that “ ‘man’s extremity is God’s opportunity’  ” (Science and Health, p. 266). Even as my duties changed, and even when I found myself engaged in combat situations, the calm sense of trust in God I gained the night I skipped my last training session never failed to bring me peace and confidence. The “Daniel thought” was always there, helping me support my fellow GIs during those months. My initial, overwhelming fear conquered, I strived to continue to see myself and every other soldier I met as a complete expression of divine Love. I left Vietnam convinced that divine guidance always directs each of our paths.

Our “all-knowing, all-seeing, all-acting, all-wise, all-loving” God (Science and Health, p. 587) has a plan for each of us. Like Daniel, I have seen that there is no circumstance that can separate us from divine Love. I am profoundly grateful for the light that Christian Science, God’s revelation to Mary Baker Eddy, shines upon the work of Christ Jesus, and for the Love that “leadeth me beside the still waters” and “restoreth my soul [spiritual sense].” 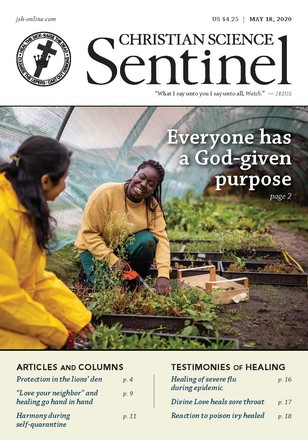 By Suzanne Connolly, Robert Minnocci | May 2020

Everyone has a God-given purpose

“Love your neighbor” and healing go hand in hand

Comfort and harmony during self-quarantine

Finding security in the divine economy

All God’s creatures are good!

Healing of severe flu during epidemic

Photograph by Cheryl Ranson | May 2020

The good that can never be canceled