As a man was going down from Jerusalem to Jericho, robbers attacked him and grabbed everything he had. They beat him up and ran off, leaving him half dead.

A priest happened to be going down the same road. But when he saw the man, he walked by on the other side.

Later a temple healer came to the same place. But when he saw the man who had been beaten up, he also went by on the other side.

A man from Samaria then came traveling along that road. When he saw the man, he felt sorry for him and went over to him.

He treated his wounds with olive oil and wine and bandaged them.

Then he put him on his own donkey and took him to an inn, where he took care of him.

The next morning he gave the innkeeper two silver coins and said, "Please take care of the man. If you spend more than this on him, I will pay you when I return."

"Which one of these three people was a real neighbor to the man who was beaten up by robbers?"

Jesus told this story in the Bible (see Luke 10:29-37, Contemporary English Version of the Bible).

Jesus' parable must have shocked the brilliant temple lawyer. And you can understand why. It was bad enough to hear that a priest, of all people, had totally ignored a man who lay mugged on the roadside. And that a Levite, a religious teacher and temple helper, did the same thing. But to hear it was a Samaritan (an enemy!) who finally rescued the dying man—that must have made the lawyer really think about what it means to "love your neighbor as yourself." So when Jesus told him, "Go and do the same!" maybe he did just that (Luke 10:37, Contemporary English Version). Maybe he eventually ended up being a Good Samaritan himself!

One thing is for sure. Jesus' parable has made millions and millions of people over the centuries ask themselves some serious questions. Like, Why didn't the priest and the Levite help the wounded man? Did they think they were too important to stop and help? Were they scared that, if they stopped, the robbers would beat them up too? Or had they already given up on the man, figuring he would die anyway?

For me, it gets down to a couple of even deeper questions: Do I really love my neighbor, like the Good Samaritan did? Or do I sometimes find excuses not to help people who really need it?

Of course, it makes a big difference to the people we help (or decide not to help) how we answer these questions. But it also makes a huge difference to you and me! If we don't really care about our neighbors—family members, schoolmates, kids at baseball or football or dance class, people on the bus, and people around the world we've never met—we end up shutting ourselves out from God. The Bible says, "If a person isn't loving and kind, it shows that he doesn't know God—for God is love" (I John 4:8, Living Bible).

And there's something else: The world needs your example as a 21st-century Good Samaritan. Your example is like a delicious perfume that stays and stays with people, way after the good thing you did. It makes them feel safe and peaceful. It can even heal people. Because they get a whiff of God's healing love, through your love. And though they may never admit it, you inspire them to be Good Samaritans too! Samaritan'?

Somebody inspired me that way years ago when I was a young mom. I was driving along a crowded road and heard a terrible crash just ahead. A driver had run a red light, spun off the road, and hit a yard worker. At first I froze, and didn't know what to do. Then I thought, "At least I can pray." So I said over and over to myself, "God is his life! God is his life!!"

When the traffic finally cleared enough for us to drive past the accident, I saw something I'll never forget. A grandma I knew had gotten out of her car and was comforting the man who'd been hit. She was wiping off his bleeding face, patting his hand, tenderly talking to him. Emergency workers were all around, but the man's eyes clung to my friend as she ministered to him with such gentle Christian compassion.

The next day, I read in the newspaper that this man actually survived, to most everyone's surprise. And a year later, another article told about his "miraculous" progress. This man's special "Good Samaritan," I believe, saved his life. And her example made me want to be a better, braver, more gracious healer myself.

Since then, I've learned lots more about the healing power of Good Samaritan love, from people of all faiths around the world. From kids, teachers, athletic coaches, rescue workers, business people, volunteers, religious workers. Especially, I've learned from Christian Science practitioners and nurses who work 24/7 to help peoples see themselves as they truly are—spiritual, whole, loved by God. Day by day, they prove that this promise in Mary Baker Eddy's book Science and Health with Key to the Scriptures is true: "If the Scientist reaches his patient through divine Love, the healing work will be accomplished at one visit, and the disease will vanish into its native nothingness like dew before the morning sunshine" (p. 365).

There's no such thing as being too young or too old to be a Good Samaritan. I knew a woman in her nineties who once stayed up all night praying for some coal miners who were trapped underground—and cried tears of joy as she watched live TV coverage of their rescue at dawn.

You can start being a Good Samaritan right now, if you haven't already. The world needs you. In fact, the world is waiting for you!!

Mary (Trinka) Trammell is Editor in Chief of the Christian Science Sentinel. 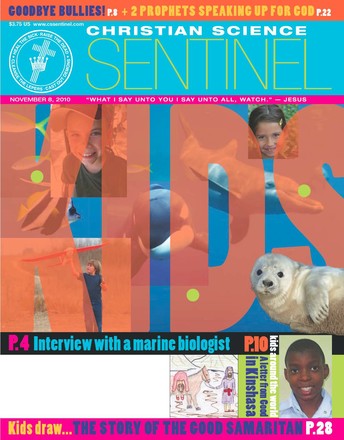 Will you be a 'Good Samaritan'?

A MARINE BIOLOGIST LISTENS TO GOD . . . AND THE OCEAN

with contributions from Sean Hanser | November 2010

WHAT WOULD YOU DO?

A LETTER FROM GOOD—IN THE DEMOCRATIC REPUBLIC OF CONGO

My poem to God

God's love for me

How God sees me

My healing at family camp

How I prayed with my friend

2 prophets speaking up for God

Elijah or Elisha? Who's who?

Kids draw ... the story of the Good Samaritan