It was my junior year in high school, and my life seemed to be going wrong in every way possible. My boyfriend had broken up with me, it felt like some of my friends were neglecting me, and my grades were slipping. On top of that, I started feeling sick, kind of "run down," and thought I looked fat. Overall, I felt abandoned by God.

My family was there for me, but at first I didn't really share too much about what I was going through. Drama, in the form of mental and physical "complaints," seemed to be hitting me right and left.

It may not sound like a big deal, but feeling unattractive was probably the worst part of this time for me. My whole life I'd felt like I was pudgy, and I'd done everything to physically fix it through exercise and eating right. Nothing ever worked. So during this time, I felt I'd finally hit a wall.

Driving home from the grocery store one day, I was thinking about how bad it all seemed—I could literally complain about everything! The song "The Fear" by Lily Allen came on the radio. Part of the song goes like this: "When do you think it will all become clear? 'Cause I'm being taken over by the fear." That was how I felt, too. I pulled over and started crying. Why did everybody seem to be leaving me all at once? Did my friends at school even care anymore?

THE IDEAS BROKE THROUGH MY SADNESS AND MADE ME REALIZE HOW MUCH GOOD I'D BEEN "REBELLING" AGAINST BY LISTENING TO ALL THESE MENTAL AND PHYSICAL COMPLAINTS.

At this point, I decided to text a friend my age, who is also a Christian Scientist, to ask him for some spiritual help through prayer. He texted back, quoting from Psalms, "God setteth the solitary in families: he bringeth out those which are bound with chains: but the rebellious dwell in a dry land" (68:6).

He went on to talk about the second part of that verse. The "rebellious" who live in a dry land can represent those who outline the outcomes of their prayers by going against, or not accepting, the blessings that they are already receiving. In this way they are putting themselves in "the desert." By not accepting the good around you, it will feel like you are lacking. He told me to breathe, leave my problems at the door, and listen to God's ideas because they would sustain me.

These ideas broke through my sadness and made me realize how much good I'd been "rebelling" against by listening to all these mental and physical complaints. There was so much good that was right in front of me. To begin with, I had some amazingly supportive friends; it was just a matter of seeing who they really were spiritually.

That week, I focused on expressing God. To me, this means accepting only good, spiritual qualities as true and real, not giving power to insecurities. I also tried to express God's wisdom in every school subject and be a pure expression of Love. I saw how real beauty has more to do with holding on to only good thoughts, instead of thinking so much about physical appearance. Thinking only about good things, Godly things, felt so natural. And instead of looking at my friends and complaining, "They don't appreciate me" or "They don't call me enough," I started to see them in the right light. Each of them had unique spiritual qualities that shone through.

As time went on, tons of healings began to pop up everywhere. My friends at school were spending time with me again. I didn't feel so neglected anymore, and they even apologized for being so distant! I think a lot of this came from prayer and changing my own thought about the situation. I began to meet more awesome people in new social situations outside school. My grades also starting improving, and the feelings of abandonment and even my bouts with feeling tired and worn out left, as I realized all the good in my life already existed. I just had to slow down and realize it was there.

And then the biggest healing of all occurred. I became more confident, and my low self-esteem was replaced with appreciation for who I was spiritually. During this whole time when I'd been focusing on the good around me, I'd stopped being so preoccupied with my body issues. I'd been eating the same things and been active as usual. But then I started getting compliments. People were saying that I looked pretty, and what a cute outfit I had on, etc. With my change of thought, as I let go of the mental baggage I'd been dragging around, it was only natural that a physical adjustment would follow—and I realized I'd lost some weight.

Although it was good to see all these changes take place, I know that the beauty and calm confidence I'm expressing in all the things I do is from God, and I couldn't be more grateful. Now in my senior year of high school, I'm less likely to focus on whatever problems come up and instead feel more confident. I'm looking forward to taking these spiritual lessons with me to college! css

Ellen Ahearn is a senior in high school and loves volleyball. 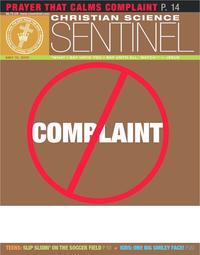