We read and hear much about “sustainability” in reference to earth’s ecosystems, both human and natural. These ecosystems are regarded to be in conflict and disordered. We hear reports about the oceans warming, glaciers retreating, and sea levels rising. Some climatological literature examines the concept of a point of no return.

Can our prayers heal such disorders? In Science and Health with Key to the Scriptures, Mary Baker Eddy wrote, “Whatever the belief is, if arguments are used to destroy it, the belief must be repudiated, and the negation must extend to the supposed disease and to whatever decides its type and symptoms” (p. 418).

These instructions were given about healing the human body. But is not the biosphere, a complex of integrated living systems, truly a “body”? And is not what happens there the result of collective human thought? In Unity of Good, Mrs. Eddy wrote, “What you see, hear, feel, is a mode of consciousness, and can have no other reality than the sense you entertain of it” (p. 8).

Much of humanity regards Christ Jesus’ healing power as a special intervention. Yet he rejected the concept of a personal goodness, flatly stating that God was the source and definition of good (see Mark 10:18), and that of his human self he could do nothing (see John 5:30). This implies that his healing works were not special interventions, nor from his personal power. Instead, they illustrated an eternal Science. This Science, which is divine and Christian, can be learned and practiced by others through the study of Christian Science, regardless of how much time has elapsed since Jesus walked the earth.

Jesus fed a multitude with just five loaves of bread and two fish; he also walked on water, stilled a storm, raised the dead, and did other marvelous acts through his humble and pure consciousness of what is scientifically real. He saw the scientific reality of the allness of God, divine Spirit and Truth, where others saw only material limitation and evil. His powerful recognition of this divine reality effected changes on the human scene. And he said such works, even greater ones, would be done by those who believe him and follow him, trusting the understanding of God they have gained through his words and works. “With God all things are possible,” Jesus said (Matthew 19:26). So, we’ve got big tasks to do. That is, in all that we do, we too can recognize that the government of God, good, is the only reality.

Let us examine the account of Jesus raising Lazarus from death and see what it might teach us about healing the biosphere (see John 11:1–46). The Bible account contains many important details that help us understand Jesus’ thinking. And, as Mary Baker Eddy pointed out, Jesus emphasized the fundamental importance of thought. For example, when his disciples asked him why they had failed to heal a boy, he said, “Because of your unbelief” (Matthew 17:20).

Materialistic thinking regards chaos and complete disorder as the natural, primitive state of creation. Furthermore, human belief holds that all material processes, combustion, the operation of machines, even the act of living, must inevitably create waste and disorder.

Christian Science teaches that Mind, God, knows all; Mind is infinite. In Mind there is an infinitely complex continuum of spiritual ideas that Mind knows and expresses as a whole; they exist in the eternal present, the now; there are no beginnings and endings. Mrs. Eddy wrote: “Eternity, not time, expresses the thought of Life [God], and time is no part of eternity. One ceases in proportion as the other is recognized” (Science and Health, p. 468).

Prayer recognizes the infinite presence of Life, God, and thus the presence of spiritual order, which is established fact no matter what material observations of disorder and accumulated waste may suggest. Paul wrote, “In [God] we live, and move, and have our being” (Acts 17:28). The real “biosphere,” then, actually exists in Mind, God, the great I AM. Despite the reports of the senses, all life lives in the I AM and therefore must manifest the order of the I AM.

In the case of Lazarus, who had been dead four days, Martha, one of Lazarus’ sisters, expressed incredulity when Jesus proposed to reverse Lazarus’ condition (see John 11:39). She pointed out the decaying, and thus disordered, condition of the body, and the time interval over which the decay had been occurring. It is as if she had said, “Master, the point of no return has passed; recovery is impossible.”

To human view, this was a reversal of inevitable, permanent disorder. But it was actually quite different from that. Order was not simply reconstituted from disorder, like organizing an office space. Jesus’ spiritual seeing recognized only order, and thus he revealed order where disorder and dysfunction seemed to be. The so-called inevitable disorder, and the supposed power of time to make it irreversible, were proved false. Jesus’ compassionate, pure, humble knowing revealed Lazarus’ life to be intact, undecayed, present—not lost—as an individual expression of the I AM.

Every healing produced by the Christ, Truth, is a proof of the unreality of the disorder-belief. Those who pray—who “know the truth” (John 8:32)—have seen to some degree the underlying, ordered, frictionless nature of God. This kind of prayer recognizes the ever-presence of Life, God, and thus the ever-presence of spiritual order, which is true and permanent—no matter what material observations over time there may have been. The action of Spirit, Love, which man expresses, is perfect; it is completely efficient; it is effortless. It is not just recoverable; it is never lost. Becoming conscious of Love’s ever-presence annihilates whatever opposes the order of Love. How could the slightest disorder exist in the presence of Love?

The understanding of Christian Science enables us to pray confidently about whatever material problem confronts us and to be confident that healing will result. In the case of so-called irreversible climate change, we can also expect that our prayers on this subject will lead to practical human solutions, such as new ways to utilize waste and to make power production more efficient.

How could the slightest disorder exist in the presence of Love?

More than seven billion humans dwell in the biosphere and hold it in thought. Does this mean that the thought of seven billion people must be changed in order to heal the biosphere? No. Mrs. Eddy said to one of her classes in healing: “We, to-day, in this class-room, are enough to convert the world if we are of one Mind; for then the whole world will feel the influence of this Mind; as when the earth was without form, and Mind spake and form appeared” (Miscellaneous Writings 1883–1896, pp. 279–280). Each of us who works wholeheartedly to be “of one Mind,” to have one God and know only His infinite allness, is helping to prove the intactness of spiritual reality in all its perfection.

The action of God cannot lead to waste, to ignorance, to unintelligence; it does not, cannot, pollute. The more we recognize and acknowledge this fact, the more good will be apparent and thus the more closely our life, our ecosystem, and all processes in the biosphere of earth will approximate the infinitely complex, but nevertheless perfectly ordered and frictionless, reality of Spirit. The passage of time cannot increase the difficulty of seeing this revelation.

As in Jesus’ raising of Lazarus, the proof of the wholeness and harmony of life is dependent only on the quality of our knowing. As Jesus said: “I say unto you, If ye have faith as a grain of mustard seed, ye shall say unto this mountain, Remove hence to yonder place; and it shall remove; and nothing shall be impossible unto you” (Matthew 17:20). 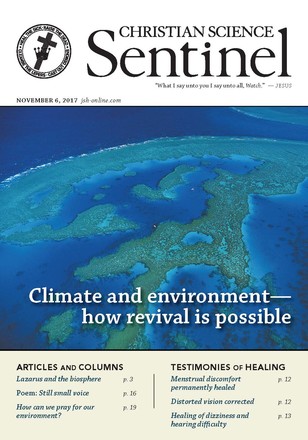 Why publish testimonies in the Christian Science magazines?

Lazarus and the biosphere

‘In the midst’ with the Christ

Only God’s goodness ‘runs in the family’

Prayer for my goat

Healing of dizziness and hearing difficulty

How can we pray for our environment?