As the white police officer screamed at me, I thought, I am not going to let you make this mistake.

He had pulled me over in this mostly white, upper-middle-class US neighborhood because I was driving without my headlights on. I’d forgotten to switch them on, and I assumed he was just going to give me a warning. But when he reached my car, he told me he smelled drugs and that he wanted to search my car. (There were no drugs in my car.)

Unfortunately, this is a common scenario. Over the years, I’ve been stopped many times under similar pretexts. To me, an African American, it’s racism and racial profiling.

In the past I’d become very angry when something like this happened. These incidents left me feeling violated and humiliated. But this time was different. I felt calm.

Why? Well, first of all, I knew there were no drugs in my car. And second, I was returning home from an inspiring evening meeting at my Christian Science church. The focus of the meeting was on the spiritual identity of God’s child.

When I suggested to the officer that he might be mistaken, he started screaming at me. He said: “Are you calling me a liar? If you don’t have any drugs, let me search your car!”

That’s when I reached out to God in prayer. And I had that thought about doing my part to help the officer not make this mistake.

The thought was not aggressive. It was a quiet internal message, assuring me that God was present and that my prayers were already being answered. As the officer yelled, I looked at him. Not at his belligerent gestures, but at a fellow citizen—a brother.

At the time, I was serving with AmeriCorps: Volunteers in Service to America (VISTA). I worked with grass-roots organizations to improve the lives of people in the community. As a VISTA volunteer, I felt I was serving my community.

Looking at that police officer, I realized he probably felt the same way about his job—he too was working hard for his community. I was grateful for this insight. It assured me that he could recognize honesty and truth.

I told the officer I’d consent to a search if he called another officer to be a witness. This didn’t make him happy, and he asked me to get out of my car. A few moments later, another officer arrived and told me I had two choices: either I could allow them to perform the search or they would call a judge and get a search warrant. “Either way, we’re going to search your car,” he said. They gave me a few moments to think about their proposal.

I held on to the spiritual ideas from my prayers. They made me feel confident and comforted in this situation. But I was most grateful for not being angry. In fact, I felt that I was helping the officers do the right thing. By including them in my prayers, I knew God was embracing each of us, giving us right ideas and showing the right course of action to take.

It was about this time that I thought about brothers in a spiritual way. I have three brothers, and though we’ve had our share of knockdowns, we love each other deeply. I see our love expressed in the respect and care we have for each other’s lives. And I realized that these officers were my brothers too, with one Father-Mother, God, as our Parent.

As I was praying, I noticed a change in the first officer’s attitude. His whole demeanor changed. He came over to me. In a gentle voice he said, “Sir, I’m going to have to give you a ticket for driving without your headlights on.” I told him that I understood, thanked him, and drove off.

The next morning, I told my project director what had happened. She was moved by the story, and told me to share it. “Share with other young men whatever it was that enabled you not to get angry,” she said.

And, in writing my story and sharing it, I hope I’m doing just that. My prayers helped not only me, but the officers as well. I learned that I don’t ever have to feel helpless about injustice of any kind. And I now see prayer as a proactive way to handle tense situations.

New views on action from a former activist

In the current political climate—in the United States and many other parts of the world—there is a lot of focus on activism. As someone who for a long time identified as an activist and is now a st...

When a woman unjustly accused some neighbors of committing a crime, she was forced to confront—and pray about—racism. The basis for her prayers? Christ Jesus’ example of seeing each individual the... 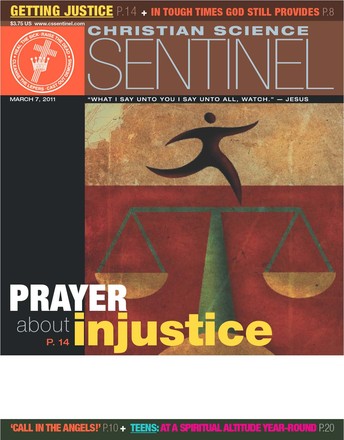 Touring stage play in UK tells story of the Bible

The spiritual journey . . . to religion

‘Call in the angels!’

We go on living

Who says you have to be sick?

At a spiritual altitude year-round

No more castles built on sand

Freed from pain and feelings of loss

Putting an end to end-times