A lesson from the tala

Just as the rocky ground cannot stop the growth of the tala, no earthly condition can prevent us from finding our God-given freedom.

Originally published in Spanish for the June 1, 2022 issue of The Herald of Christian Science.

The tala is a deciduous tree that is part of the native flora of my country, Uruguay. We find it in all types of soils, but mostly in rocky terrain. There it sprouts and grows in conditions that would be almost impossible for other types of trees. The tala is able to adapt to the most unforgiving environments; although it takes some time, the tala’s small shoots break through even the hardest rocks in their eagerness to reach the sunlight.

The tala’s resistance to being overcome by the aridity and harshness of its surroundings, and its ability to thrive in spite of such surroundings, give me something to think about. Like the tala, we can sometimes find ourselves in difficult environments—oppressed by inhumane conditions, beaten down by fear, sickness, resentment, or the past. We may even find ourselves walking through life burdened by such limiting conditions, none of which come from God.

Spiritual man and woman, being the reflection of God, are free to express the glory of their creator.

In the Bible, Genesis 1 records that God created His children—all of us—in His image and likeness and that we have dominion over the earth. And in his letter to the Romans, the Apostle Paul speaks of “the glorious liberty of the children of God” (Romans 8:21), who are as free from subjugation as a ray of light.

For example, a ray of sunlight is entirely dependent on our solar system’s central star, the sun. And these rays are capable of shining anywhere. They know no restrictions or impediments. Their origin gives each ray not only this freedom but also its luminosity. Likewise, the spiritual man and woman, being the reflection of God, are free to express the glory of their creator, or source of existence, God.

The knowledge of our spiritual identity—in other words, of what we are as children of God—allows us to start discerning all the wonders of infinite Love, God, such as health and peace, to which we are fully entitled. Aspects of this limitless understanding may come in a moment of spiritual insight as well as gradually through persistent prayer and spiritual growth. Whichever is the case, it comes as we dedicate ourselves to the study and practice of Christian Science.

I know this to be true. When I was very young, I was diagnosed with asthma. Whenever I had an asthma attack, I had to stay in bed for several days, which meant of course I couldn’t attend school. I was treated with everything that medicine considered appropriate to temporarily mitigate the disease. It was not at all easy, not for my family and not for me.

The prognosis was that when I reached adolescence, the asthma might ease or even disappear. But none of that happened. On some occasions it even got worse, and I had to sleep outdoors when I could no longer bear the humidity of indoor spaces. It was the only way I could breathe normally.

Becoming acquainted with Christian Science was like discovering a new world—a world full of light and freedom that allowed me to learn more about the God I’d loved from a very young age, and simultaneously about myself as His image and loved child. I began to study this Science with lots of enthusiasm, which increased when I saw that it was possible to overcome problems through prayer. However, not for a moment did it occur to me that asthma could also be overcome by this spiritual method of healing, because I had accepted it as always having been a part of me. Yet, I continued to study Christian Science, even as there were increasing demands on my time over the years to care for my family.

I began to study Christian Science with lots of enthusiasm, which increased when I saw that it was possible to overcome problems through prayer.

The sudden realization several years later that I could breathe freely, no matter what environment I was in, was a most wonderful discovery. The healing had happened so imperceptibly, but was at the same time unstoppable. I compared it to the seasons that arrive almost without our taking notice, and yet nothing and no one can stop their course. It was then that I understood that the perfection of God’s work (in other words, the whole universe, which includes me) is constantly manifesting itself whether we know it or not, and whether we claim it or see it or not. The study and practice of Christian Science allows us to perceive divine Mind’s grand, spiritual creation more clearly, which opens the way to healing.

My complete freedom from asthma continues to this day. The affliction that seemed to mark me since childhood disappeared as the truth of being dawned in my consciousness. Just as the rocky ground cannot stop the growth of the tala, no earthly condition can stop the healing impetus of divine Truth and prevent us from finding our God-given freedom from the restrictions of mortal and material assumptions and conditions. As described in the words of the Discoverer of Christian Science, Mary Baker Eddy, “Truth crushed to earth springs spontaneously upward, and whispers to the breeze man’s inalienable birthright—Liberty” (The First Church of Christ, Scientist, and Miscellany, p. 128). 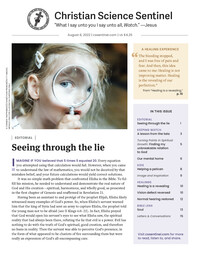